Reviewed today: The Feast, The Taking, The Velvet Underground, What Do We See When We Look At The Sky? 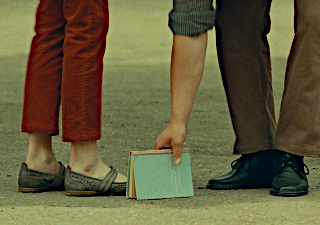 One nice feature of the online component of the LFF is that we get a lot more Q&A sessions than we would do normally, what with Zoom calls being much cheaper than flying a director to London and back. The increase in video conferencing in our lives generally has given us many more opportunities for peeking inside other people’s houses: so for the second year running, even at this early stage of the festival, it looks like Peter Hames will win the award for BFI Staffer With The Most Spectacular Zoom Backdrop.

Hames is the programmer who’s introducing us to this film from Georgia. Over a leisurely two and a half hours, it tells the story of pharmacist Lisa and footballer Georgi, two people who bump into each other in the street twice in the same day and instantly spark a connection. They agree to meet formally for a first date the next day. You can probably guess what happens next: the night before their date, the two of them are struck by a curse that changes their appearance completely, meaning that they’ll never recognise each other again. Theoretically.

There’s a playfulness to Alexandre Koberidze’s film which, if you took it the wrong way, could prove to be massively irritating. It’s there right from the scene of Lisa and Georgi’s initial meet cute, which is framed so we can only see them from the knees down: The BBG suggests the scene could have been filmed using the WellyCam from last night’s Taskmaster. Most of the story is told by a rambling offscreen narrator: subplots are introduced and then completely ignored: there are several scenes that consist solely of people waiting for things to happen, which appear to serve no purpose other than to waste the viewer's time. The fact that many of these issues are directly addressed towards the end of the film either makes them slightly better or much, much worse.

But you can’t write off the film as pure industrial strength arthouse whimsy, even though to some degree that’s exactly what it is. It’s partly a fairytale about the nature of fate, which explains why the main characters so rarely do anything – the plot, such as it is, is all about how things happen to them. Also, the languid pace of the film ultimately forces you to look at it in a different way. On one level not much may be happening, but (as in the early sequence of a group of kids leaving school) a closer investigation reveals countless micro-narratives happening in the background, suggesting there’s a whole level of life that we could be missing out on by not paying attention. There are lots of static long shots in this film where it’s left up to you to work out what you should be looking at: if the LFF was still picking out one arthouse film each year to showcase at the IMAX, I think this would be the one for 2021.

Dammit, do I have to come to some sort of conclusion here? Because I’m still not quite sure what I feel about WDWSWWLATS? yet, but I think I’m glad I’ve seen it. 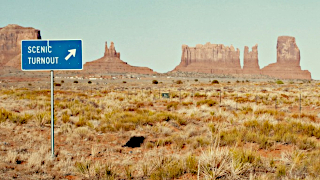 A return visit to the LFF by director Alexandre O. Philippe, who seems to be here on a regular biennial schedule now. This time around, he's accompanied by his UK producer Felix Gill, who's very pleased that their film's screening at the Odeon Luxe West End: "it smells like a new car," he says. Hey, that's my line from Wednesday. Damn these facemasks!

The Taking is a bit of a departure from Philippe's previous work. His previous LFF visits have presented deep dives into individual films: 78/52 on Psycho, and Leap Of Faith on The Exorcist. This time round, he’s focusing on a single location that’s featured in multiple movies, which if nothing else has massively increased the amount of money he has to spend getting the rights for clips. That location? Monument Valley.

Overlaying those clips with voiceover contributions from genre specialists (including the mighty Sir Christopher Frayling), historians and semioticians, Philippe looks into the history and meaning of the instantly recognisable rock formations in the valley. Because that meaning has changed substantially over the years. Monument Valley was initially made famous by John Ford as the location for some of his biggest Westerns: a wide open landscape that acted as a shorthand for America and its promise of space and freedom. Over the years, numerous imitators used it in films as a more general symbol of the American West: these days, it’s been corroded into a symbol of the American Western, an image that's been referenced and spoofed so much that's it's lost all its original meaning. Meanwhile, as white America continues to build its stories on this mythic landscape, the Navajo whose land it was in the first place are struggling to make their stories heard.

That’s a lot of threads to pull together into a relatively short film, and towards the end Philippe overreaches a little by attempting to draw parallels with another American symbol, the Capitol building, with reference to its storming earlier this year. (Maybe it's just that it's too recent history: I’m finding these days that, to take a similar example, films that directly reference the pandemic don’t sit right with me just yet.) But apart from that minor hiccup, The Taking is a smart mixture of excellent film clips (including Peter Bogdanovitch's hilarious interview with John Ford), behind the scenes stories (Frayling has some terrific goss on how Sergio Leone used the Valley in Once Upon A Time In The West) and socio-political analysis. It’s not a combination I expected from Philippe, but it's a very welcome one. If the Q&A is to be believed, his next visit here in 2023 should be with a more traditional film looking at the links between David Lynch and The Wizard Of Oz. Your definition of 'traditional' may vary, of course. 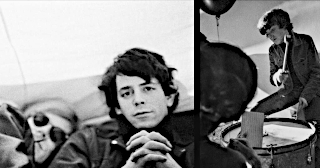 New thrill again! Well sort of, again. In recent years, the LFF has had a problem regarding what to do with its big galas, after the Odeon Leicester Square's fancy refurbishment ripped 800 seats out of the auditorium. Their temporary solution was to hold the gala screenings almost simultaneously in the Odeon and a pop-up cinema in Embankment Gardens, leading to the awkwardness of having to transport special guests between the two venues at high speed. What they needed was one big classy venue that could hold a large number of people, and this year's move to the 2700-seat Royal Festival Hall appears to have solved their problem.

Or has it? I'm not so sure. The RFH was designed for the specific purpose of showcasing a group of musicians on its stage playing towards an audience, and the acoustics of the room have been fine tuned over decades for that configuration. It wasn’t intended as a surround sound venue: simply installing a 7.1 Dolby system around its walls and assuming it’ll work, as they’ve done here, won’t quite cut it, as sounds go bouncing off the walls in all directions.

It’s a shame that my first experience of this room is Todd Haynes’ documentary about The Velvet Underground, a film that really deserves a pin-sharp sound system to cope with all the fuzzy archive material on the soundtrack. Someone in the projection booth has made the decision to crank it right up, which adds a welcome edge of rock 'n' roll distortion to the music but makes some of the older interviews largely inaudible. I don’t think it’s just my ears or the film's mix, but I’ll monitor how subsequent screenings sound in here and report back.

Aside from the messy audio, this is actually a terrific film. Haynes has got around the problem of filling a modern cinema frame with 4:3 archive visuals by going overboard with the split screen, partly in homage to the band’s mentor Andy Warhol. He makes stunning use of Warhol’s film portraits of the individual band members, single-take several-minute closeups that run in one half of the screen while he fills the other half with anything he can lay his hands on – still photos, the tiny amount of archive band footage available, and lots of avant-garde cinema from the period. (The audio-visual clearance credits on this film take the full length of All Tomorrow’s Parties to run.)

As for the story itself, it’s not that much of a surprise: for all their influence, the trajectory of the Velvets isn’t that different from the trajectory of most other bands. The tension between two of its key creative forces - experimental musician John Cale and rock 'n' roller Lou Reed - is what made the band's early work so electrifying, and its later implosion so inevitable. But Haynes does a great job of setting the context of the early sixties, showing how multiple factors combined to make New York the perfect environment for a band like this to come together. And of the interviewees who weren’t in the band, Jonathan Richman is the most delightful: a teenage fan who was inspired enough by them to make his own music. Awwww. The Velvet Underground is a fine tribute to a legendary band: it looks terrific, and possibly could sound great in a different room. (Or on your computer when it comes to Apple TV next week. Am I the only person who thinks it feels weird for a countercultural event like this screening to be so full of thankyous to a multinational corporation?)

The Cineaste - A wonderfully inventive debut feature from director Lee Haven Jones sees a family hosting a posh dinner party in their high-end home in the rural Welsh mountains. Only there are troubles brewing, and it's a struggle for mum and housewife Glenda to keep the evening on track. The two sons have their own issues, and the local waitress hired in for the evening......well, she seems to have an unsettling, other-worldly presence.

Haven Jones gives us a brilliant composition here as the tone of the evening inexorably descends into the dinner party from hell. Maybe not to everybody's taste, but if it is, it's a mouth-watering banquet of grand guignol shock horror. Afters anyone?