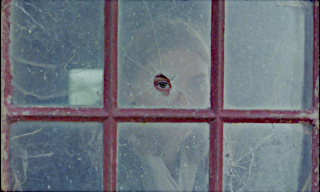 We're back on the BFI Player for another set of shorts (view them yourselves until October 17th via the 'full programme' link above), and at least this one announces itself clearly in the title: it’s all going to be weird, isn’t it? Unfortunately, 'weird' in this case seems to mean any combination of these three items: narrative ellipses, slow zooms in on objects and low drones on the soundtrack. That’s all you get, I’m afraid.

Take Mark Chua and Li Shuen Lam’s A Man Trembles, for example. It’s a film from Singapore that follows a family during the day leading up to some sort of event, which everyone is talking around but refusing to address directly. There’s a genuine tension in there right up to the point where the event happens, and then it all fizzles out in a burst of strobe lights. That’s more than can be said for Sophie Littman’s Know the Grass [official site], which advertises itself as ‘British folk horror’ but looks more like '1970s public information film about the dangers of playing with sparking fuseboxes’, and has the full ellipse/zoom/drone trifecta going for it.

In this company, Dan Hope’s animation The Clearing [animator site] feels like a breath of fresh air: it has proper jokes (helped by some fun voice work from Julian Barratt and Julia Davis), and the Dark Secret At Its Core pays off because it’s so gloriously daft. Humour does help in these situations, and to a degree Baker Karim’s Swedish sci-fi Earthbound [official Instagram] has a darkly amusing twist on the old idea of a new Ark taking selected people away from our dying planet, enhanced by a stylishly distinctive look (two looks, in fact).

For the final two shorts we move to more direct horror, and the results return to being disappointing. Nicolai G H Johansen’s Inherent [trailer] gets some interest from the fragmentation of its story about a young girl and what she has to do to satisfy something in her attic. Unfortunately, it’s so cackhandedly fragmented that you’ve found out everything you need to know by the halfway mark, and the rest of it is just padding. And – by fun coincidence, given the last film we saw yesterday - Louis Bhose’s Calving [official site] has a vet dealing with an unholy abomination of a newborn calf, which can only communicate in – yes! – a high volume continuous low drone. We’re never quite sure how it happened, and the camera does a slow zoom towards the cowshed at least once, so at least we finish with a full bingo card. Could we have a better card next time? 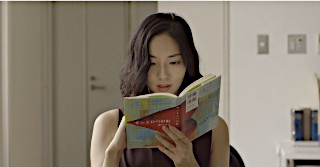 Up until a few weeks ago, I’d assumed Ryusuke Hamaguchi would be one of those directors you only ever saw at festivals, and nowhere else. After all, the first film of his I saw lasted over five hours without an interval: you’re not going to get that in a commercial cinema any time soon. But things are changing: he’s got two films in the LFF this year, both of which already have UK distribution, whose combined running time is the same as that debut. One of them has even just been selected as Japan’s official entry for the 2022 Best Foreign Film Oscar.

This is the other one, though. And as if to prove that not everything Hamaguchi does has to be of epic length, this is effectively three separate short films crammed into two hours. In the first one, two women discuss recently acquired boyfriends: the second episode features a student's attempt to get revenge on the college professor who humiliated him: and the last one follows a woman's adventures as she travels to Sendai for a school reunion, while the world suffers from a computer virus that's effectively brought down the internet and conveniently covers up a couple of potential plot holes.

Well, maybe that paragraph's not strictly true. That's how the stories start: but in each case, partway through they take a sudden left turn that moves them into unexpected territory. It's never what you'd call a twist, it's more along the lines of the introduction of a new perspective on the characters involved. As has been the case with all the Hamaguchi film's we've seen here so far, the focus is largely on the women, and entirely so in the final chapter: that's the best one in the set, as it layers a couple more levels of emotional complication onto the story, and really delves deep into the lives of the two ex-schoolmates at its centre.

You could argue that Wheel's stories are a bit static: large parts of the film involve two people talking in a room for several minutes, and you could probably stage them as plays with little effort (apart from the tiny cinematic flourish that accompanies the ending of the first story). But the thing is that they work so well as stories, regardless of the medium: each of them has a beautifully satisfying end, making the whole film the most enjoyable thing of Hamaguchi's I've seen so far. I've no plans to see Drive My Car until after the LFF, but we'll return to the director again soon. 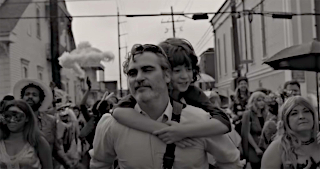 First technical problem (of 2): the LFF ticketing website. It crashed continuously for the first hour or so after tickets went on sale, but that happens every year and we’re all used to it. The tricky bit was that when I got to the first film I had to book at the Royal Festival Hall – the Surprise Film – the only seats apparently available were restricted view ones right at the very front of the hall, meaning guaranteed neckache for us as we stared up at the screen. It wasn’t until later on that I realised the site was only showing me a small section of the seating plan, and there were dozens of much more comfortable seats available at the back of the room. Ah well, at least it only cost a tenner.

Second technical problem (of 2): the sound system at the Royal Festival Hall. Since my introduction to it on Friday, I’ve heard similar stories from other people about how duff it is. Guess what? If you’re sat at the front of the hall, it’s even worse, with the sound from the front speakers almost drowned out by the echoes from the back and sides. Still, as long as we got a film without too much mumbling in it, the dialogue should just about be audible.

This year’s Surprise Film is the latest one starring Joaquin Phoenix. Ah, shit.

Phoenix plays Johnny, a radio reporter who travels the country recording children’s responses to his questions about the future of the planet. He receives a distress call from his sister: could he look after his nephew Jesse (Woody Norman) for a couple of days while she deals with a family emergency? Johnny says yes, only to find that the couple of days turns out to be a massive underestimate, meaning he has to take Jesse on the road with him for a series of heartwarming adventures.

Not heartwarming for me, though. The crappy sound turns out to be the main thing that distances me from the film: so little dialogue was audible that I literally found myself treating it like one of those Monoglot Movie Club articles I used to write for MostlyFilm, in which I'd watch a foreign language film with no subtitles and try to work out what was going on. This is the first time I've had to do that with an English language movie, using the visuals and the tone of voice as pointers towards what was being said. It has to be said that those visuals are lovely, by the way: we need to start talking about Robbie Ryan as one of the world's great cinematographers, as his lustrous black and white cityscapes look magnificent even when you're looking at them from almost directly under the screen.

Ryan is probably going to pick up a few gongs for his work here during awards season, and that goes double for Woody Norman's performance as Jesse, whose depiction of the kid's wild mood swings is pitch-perfect. But here's the thing: I came away from C'Mon C'Mon rather angry, because I interpreted it as a cynical attempt to take current mental health concerns and package them up in a sentimental, touchy-feely, Oscar-baity way. It seemed to be milking Jesse's obvious neurodivergence for cheap drama, with the main conflict coming from Johnny trying to balance his sympathy for Jesse's condition against his frustration with his nephew's behaviour. I even had the word autsploitation lined up ready and waiting to use in this review.

And then, as I usually do with Monoglot Movie Club, I did some reading around after seeing the film to find out what I might have missed. And it turns out that Jesse isn't intended to be autistic: every other review I've read says he's exuberant and lovable. He's not on the spectrum, he's a very naughty boy. If anything, that makes it worse: it's now a film about a spoilt kid, where the main conflict comes from Johnny trying to work out what the acceptable level of spoiling is that he should offer in any given situation. Lovable? Not for me. As with writer/director Mike Mills' previous films, there's a soundtrack full of hipster pop: I think it's a shame he couldn't find room for Half Man Half Biscuit's Surging Out Of Convalescence, which includes the lines 'is your child hyperactive / or is he perhaps a twat?' Ah well, at least it only cost a tenner.

The Cineaste - Yeah! Now this is what a Film Festival film is all about.... discovering a director you've never heard of, a leisurely-paced film where on the surface not much seems to happen, nodding off in the middle, and wondering during the Q&A afterwards if there were in fact some key revelations you missed whilst dozing mid-film.

"Abuela" (grandma) is the matriarch of a loosely-structured family living in very rural surroundings, with her grown-up daughter Clara and teenaged grand-daughter Maria (Clara's neice). Clara is very much her own independent spirit. She has an intuitive connection with nature and animals (in particular her favourite horse, a docile white); she is rather mentally undeveloped; and, a key factor for the few locals, she has spiritual healing powers through the intercession of the Virgin Mary. It's a simple, uncomplicated, rural life. Then, grandma's husband needs to go away to attend to a sick relative, and a horse-hand (male), is brought in to attend to their favourite horse. And of course the whole domestic dynamic subtly but inexorably changes.

The focus of the film was to see things from Clara's point of view, sometimes quite unconventionally different. The tone of the film was one of calm sumptuousness - with long langourous takes, and little dialogue, interspersed with very occasional family disagreements caused by Clara's own unique interpretation of events.

This was an intriguing and enjoyable film, made all the more so by director Nathalie Alvarez Mesen's comments during the Q&A afterwards - how she wished to portray Clara's character, unrestricted by the conventional expectations of family or society. A wonderful, bold film.