(Yes, I know I said the festival was over yesterday. However, The Cineaste had a busy weekend, and the last of his reviews only came in this morning, so I've given him a page of his own for the final batch: the ones that were originally attached to yesterday's page, plus some bonus lesbian nun action. Therefore...)

Reviewed today: A Banquet, Benedetta, King Richard, Prayers For The Stolen, She Will, Shepherd. 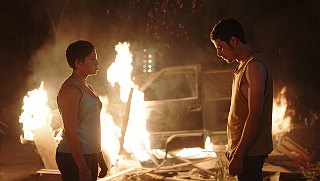 Prayers for the Stolen [trailer]

Yeah! Just like the old times, with those in the know (thanks for telling me) casually sauntering in and out of what is officially now the BFI’s “emergency exit only”, i.e. what formerly used to be the main entrance, where pre-smartphone we queued round the block for the last tickets for some arty euro gothic-horror concoction.

This film is a reasonable watch, but rather slight. Set in Mexico, it’s a fictional drama centred around young schoolfriends (mainly girls) growing up in the rural countryside, set against the context of the country’s notorious drug wars waging furiously outside. At least, that’s the premise – as it panned out, the drug wars factor was only very occasionally referenced, and then only briefly. Director Tatiana Huezo has made documentaries before about the country’s drug wars, and might have felt reluctant to labour the point. It made for a strange balance to the film, given that that was supposed to be such a key point.

So, we have plenty of scenes typifying “young family growing up in bucolic rural surroundings” – lots of shots of the scenic countryside, cows, the kids playing harmlessly in the nearby woods, some more cows, the kids at school, a family cooking with very basic kitchen equipment, more shots of the countryside, more cows...... you get the idea. And I couldn’t help but wonder, yes, all very well, but where’s all this going? What’s the point? The point, of course, should have been the constant threat of the implications from the drug wars (extortion, kidnap, whatever), but so so little was made of this.

Then as if to compensate for this Huezo gives us a rather out of character melodramatic finale (referenced in the film’s original Spanish title, which translates as Night of Fire). Overall it’s an interesting situational study but rather aimless and lightweight.

This debut feature from director-screenwriter Russell Owen is a creditable effort. (NB I had to google his name to make sure I’d got it right – the BFI LFF programme variously refers to him as Russell Owen and Owen Russell. Still, most of us have probably had worse insults than having our names transposed, although personally to my knowledge I’ve never been called Cineaste The). It’s an impressive exercise in supernatural horror, with some genuinely masterful and scary touches.

Overcome by the sudden death of his wife, Eric Black (Tom Hughes) answers an ad to shepherd a large flock of sheep on an otherwise uninhabited island off Scotland’s west coast. Even before he arrives there, dark forces seem to be at play – the boatwoman ferrying him there has an unsettling presence, accentuated by some unnervingly cryptic comments she makes. And once he has arrived, all surreally sinister hell breaks loose. And Black may be subconsciously adding some personal gremlins of own into the mix.

My problem with this film is that for a good part of it, that’s all we had – a succession of psychological horror situations. With little light or shade, so to speak, and a very meagre plot to put them into context. With so few characters (effectively the only others are Black’s mother, and, unsurprisingly, the boatwoman), the film needed a strong storyline as a framework on which to hang the (admittedly very suspenseful) effects. It didn’t really have one, and after a while it started to drag. Not without credit, but not without flaws either. 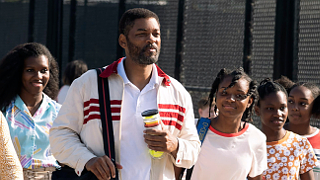 Oh what a wonderful film. What a really joyful joyous enjoyable film. Venus and Serena Williams need absolutely no introduction, and their dad Richard barely any more. So it’s the telling of their story that’s the key factor, and this film does it spectacularly.

Richard Williams is the dad well known for wanting his daughters to be achievers, and so, with no tennis knowledge or experience, he starts coaching them on the path to.... well, the two tennis sensations they’ve become. And so we see lots of scenes where he’s coaching them on their local courts (notwithstanding the unwelcome attention of some dodgy geezers – their neighbourhood being a humble L.A. ghetto), domestic scenes at home with the family all relaxing together, and such like.

The tone of this film was just right – there was heart-warming humour regularly throughout, and the casting was inspired (Will Smith, who I’ve not always been a particular fan of, is simply terrific) as were Saniyya Sidney and Demi Singleton as the young Venus and Serena. I don’t know how much artistic license there is in the film, but there’s one particularly brilliant episode. After some trouble at their local courts with some unsavoury gangsters, Richard takes the girls (now aged about 10 or 11) to one of the top tennis clubs in the state (unfortunately I can’t remember which one, where), where they gatecrash a practice session between John McEnroe and Pete Sampras (as if!). Richard, with his engaging mix of determination and humility, introduces himself and asks the coach supervising these two greats if he’d hit a few rallies with his daughters. McEnroe, unsurprisingly, storms off the court in indignation; Sampras, magnanimously, says “sure, go ahead”.

Smith’s portrayal of Richard Williams was a revelation. The actual Mr Williams was noted for being rather overbearing, authoritarian, even confrontational. Smith has him as a warm-hearted family man – humorous, humble, very supportive of his daughters. I really enjoyed this film. Huge huge credit to all involved.

This is a rather slight and aimless film. Some supernatural horrors couldn’t hide the fact that there really wasn’t enough of an interesting story to make it all worthwhile. Betsey, her younger sister and mum are all disorientated by the unexpected death of their dad/husband. Betsey goes to a party, and, after indulging a bit too much, goes into the garden for some fresh air. Here she experiences some foreboding celestial phenomena – and everything goes horribly pear-shaped from hereon in.

Oh dear, it was all rather a tiresome, pointless mess. Betsey is under the spell of some other-worldly spirit (she completely stops eating, but doesn’t lose weight), and the film then progresses, looking at how or why. But it rambled, it didn’t engage my interest, and I found my thoughts wandering to this afternoon’s football matches. There really wasn’t enough of interest to get my teeth into. More like tea and biscuits than a banquet. 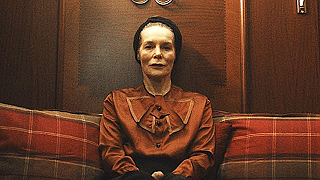 A veritable luvvie’s love-in, with director Charlotte Colbert and some of the cast introduced beforehand, and, judging by the whooping and cheering from the audience, several friends/family members therein too.

Well now, this was a supernatural horror show that was really good. Veronica Ghent (brilliant performance from Alice Krige) is an ageing and fading film star. She heads off to a meditative retreat in rural Scotland (with her nurse), to try to both recover her mojo and to convalesce after a mastectomy. Expecting her sojourn to be a solitary retreat, she’s dismayed to find it isn’t, but that she’s sharing the abode (a grand country pile) with a number of other creatives with their own idiosyncratic agenda. It’s not a good start; and her relationship with her nurse is a rather prickly one.

The film proceeds very nicely. The setting was great (in the middle of a thick forest), the back story of the building itself, the well placed horrors pieces, the subplots, the flashbacks, the delightful cameo from Malcolm McDowell – all make for a really cracking film – I loved it. I was seriously disappointed when it ended – I could have happily watched the plotlines unfold for another hour or more.

There was an engaging Q&A afterwards – Malcolm McDowell was in fine form and had us laughing at his tongue-in-cheek observations. Then someone (one of the head honchos from the crew? – I don’t know) joined the director and cast at the front and asked the crew members in the audience to stand up so we could applaud them, and upwards of 20, 25 people stood up. As mentioned earlier, a veritable luvvie’s love-in. It could only be the Curzon Mayfair.

Paul Verhoeven brings his own inimitable, enjoyably irreverent style to this engaging romp about two nuns having a lesbian relationship, based, allegedly, on a true story. It's set in the Tuscan town of Pescia in the 17th century, largely in the convent where the nuns reside. The church's influence looms large, and woe betide anyone foolish enough to transgress its statutes. It's not too much of a spoiler to reveal that their affair gets found out, and then the stakes up considerably, as everyone's trying to cover their backs, which includes those who may or may not have known about it. Verhoeven gives us a deliciously tongue-in-cheek broad brush picture of ecclesiastical life - the characters, the rigid hierarchy, the nuanced internal politics, all set against fabulous photography.

It's a great credit to Verhoeven's storytelling that the film never flags, despite the fact that the nuns' relationship is really the single layer in the plot. Overall, it was great fun - and my enthusiasm was barely compromised by being in the Royal Festival Hall, a wretchedly inappropriate venue I've come to dislike more and more each time I see a screening there. Thankfully this is my last film there this LFF, so it's au revoir RFH - come back the Curzon Mayfair's luvvies' love-ins, all is forgiven. Now, what were you asking about Terence Davies?