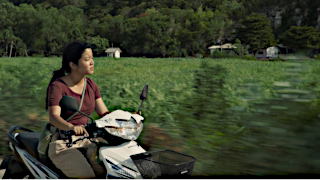 Hooray! Carrying on the innovation from last year, all of the LFF shorts programmes are free to view online for the duration of the festival - you can see all of the films I'm going to talk about here by clicking on the 'full programme' link above, as long as you're based in the UK.

Boo! Carrying on one of the most irritating features from last year, you can't watch a full shorts programme in a single go: you have to press play on each film in turn, which is always preceded by two minutes of BFI promotional material that you have to skip through. SORT IT OUT.

We have seven films here, so let's run through them in the suggested programme order. Ivete Lucas and Patrick Bresnan’s Happiness is a Journey [official site] follows one man through the Christmas Eve night shift of his job at an Austin newspaper distributor. The first part of the shift involves packing and sorting all the papers, and then for the rest of the night he delivers them in that chuck-the-paper-at-the-house-while-moving-down-the-street style that you only ever see in American movies. There's good use of split screen to get across the simultaneous busyness and tedium of the work. Michelle Coomber’s Nsenene [official site] shifts the scene from Texas to Uganda, and is easily the most visually impressive of the seven films in the programme. Stunning photography and lilting narration play off each other beautifully as we learn about a Ugandan town's grasshopper harvesting technique, using a series of terrifying electrical contraptions.

We've ploughed into the programme without reading too much about it, so by this point we've made the assumption that this is a collection of documentaries. The next film proves us wrong: it turns out the common theme is more to do with looking at everyday lives around the world, sometimes using documentary, but sometimes using fiction shot like it's documentary. For example, if you weren't paying attention, Pom Bunsermvicha’s Lemongrass Girl [official site] would look like a making-of film showing a Thai movie crew at work. But a story emerges: one of the crew is tasked with performing a daily magic ritual to keep the production running smoothly. It's subtly plotted, with a lovely blink-and-you'll-miss-it punchline, and I think it's my overall favourite in this collection.

We go back to more traditional documentary with Juliana Kasumu’s BABYBANGZ [director's site], a straightforward depiction of Anastasia Ebel's New Orleans hair salon, during which she and her customers discuss the culture and semiotics of black hair. It's topped and tailed with models showing off some of Ebel's most spectacular hairdos, so it almost works as an advert for the salon as well. If you're in the mood for a less traditional documentary, though, there's Alfie Barker’s Hanging On [official site], which interviews the inhabitants of a Yorkshire community about to be turfed out of their homes by gentrifying developers. The visual device Barker uses to depict how the residents feel seems a bit tacky at first, but you warm to it as the film goes on.

David McShane’s Come [official site] is another fiction film that feels like a documentary, albeit an animated one. It does a pretty good job of depicting the awkwardness that comes straight after a one-night stand, and comes with a warning of adult content as a bonus. (Specifically, about ten centilitres of adult content, if the title hasn't already tipped you off.) Finally, all realism goes out of the window with Leonardo Martinelli’s Fantasma Neon [trailer], which examines the plight of Brazil’s food delivery workers, but does so in the form of a musical. The acted scenes and monologues confirm that these workers are treated about as badly in Brazil as they are everywhere else. Unfortunately the musical elements are too fragmentary to engage with properly: you keep waiting for a proper song on the subject, and it never comes. Hey, you do realise that Tie Deliveroo Down Sport has been sitting there all along, don't you? 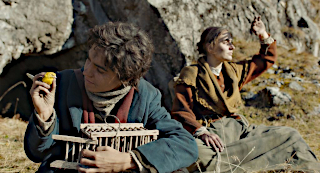 It seems a bit early in the festival to let off the ADRIAN WOOTTON CLAXON. He's been doing a splendid job for the last couple of decades curating the Italian films at the LFF, but they always seem to get push into the tail end of the programme. This year, though, one of his choices is a contender for the festival's First Feature competition, so he's here on day four to introduce it and its director. Wootton remains the only LFF director who's stayed involved with the festival after finishing his stint in the post, and it's always nice to see him around.

Anyway, about this film. Agata (Celeste Cescutti) lives in a coastal religious community at around the dawn of the 20th century. She’s just given birth to a stillborn baby, and believes (as Catholics would do until, um, 2006) that her daughter will remain in limbo for all eternity, because dead children can’t be baptised. But she hears that there's possibly a way to save her baby’s soul: travel to a sanctuary in the far north which is capable of bringing her child back to life long enough for a baptism. So she sets out there on foot, with her child’s coffin strapped to her back. It’s going to be a dangerous journey, and the first person she meets on the way – the mysterious Lynx (Ondina Quadri) – may be a help or a hindrance to her.

This is an incredibly confident first feature from Laura Samani, and one that could only really come from Italy. First of all, there’s the obvious thread of Catholic doctrine running through it. But there's also the sheer scale of the journey she has to make, taking her through wildly different landscapes - and dialects, as this film is set before the Italian language as we know it now was created to hammer out all those regional differences. Finally, there's the operatic sweep of the whole thing: without ever tippling into melodrama, the story takes in huge emotional swings, surprising characters and an extraordinary ending. Sorry, Wales, my money's going on Italy for the First Feature prize now. 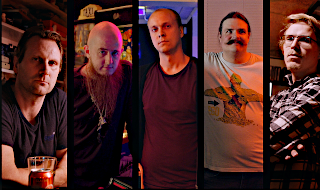 We went to the Edinburgh Festival a couple of months ago: we knew the risks: we came back with (admittedly) mild Covid. Why would we want to spend time in rooms full of people being entertained, given all the lurgies flying around in the air? Because for all the talk about hybrid festivals, being in an audience all experiencing the same thing at the same time is just the best. In terms of film, there are certain cinemas where that audience reaction is more tangible than usual: the Prince Charles is one of those cinemas. And when I read the synopsis of this film and saw it was playing at the Prince Charles, I suspected that this would be the perfect combination of subject matter and cinema venue. I was right, too.

Kim Cannon Arm – he does have a real name, but it's probably only used by his kids and grandkids, whom we never meet – is a huge fan of vintage arcade games, in particular the old school outer space shoot-em-up Gyruss. At his local arcade (the Bip Bip Bar in Copenhagen) Kim is making plans for a world record attempt: playing Gyruss continuously for 100 hours on a single coin. Luckily, he's got a terrific group of friends who’ll do all they can to help him pull this off, working out the complex logistics ("ideally, he shouldn't take a shit for the whole time") and giving him moral support.

As the director Mads Hedegaard says in the Q&A afterwards, he started out making a cinema vérité piece about Kim, but soon realised that his network of friends were the real story. They’re all fascinating people, each with their own similarly nerdy side hustles – slam poetry, analysing the mathematics of Bach, and so on. And they’re all gamers too: it's touching that during Kim's world record attempt, he asks two of them to support him by playing their own favourite games alongside him.

It’s structured exactly like a traditional sports picture, except that the sport in question involves a man standing in front of an arcade game for several days, pausing only for carefully timed wees and the occasional 15 minute nap. It's to the credit of editor Mark Bukdahl that the record attempt is genuinely exciting to watch, although even in edited form you’ll be heartily sick of the 8 bit version of Bach's Toccata and Fugue by the end of it. You may not think watching someone else playing a game is that engaging an idea, but the enthusiasm of everybody involved is totally infectious: and, as I'd hoped, the Prince Charles audience turns this film into an emotional rollercoaster ride, with some gloriously audible reactions on the night. If nothing else, I suspect no other film in this festival will pull off the coup that Cannon Arm manages during its closing credits.

The Cineaste - This is a wonderfully enjoyable film from director Mia Hansen-Love. A couple, played by Tim Roth and Vicky Krieps, are both film-makers themselves, and, seeking creative inspiration, rent the isolated home of Ingmar Bergman. The first stages of the film are set against an unashamed homage to all things Bergman – his films, career, the man himself, and then it gradually evolves to looking at the couple’s relationship. And then it unpeels another layer when Krieps’ character has an idea for a film (partly -semi- autobiographical perhaps?), which plays out to a similar background to the one they’re currently in. No overall histrionics, just a wonderful, measured, mature piece of sumptuous film-making.