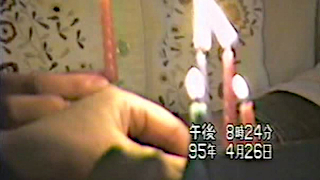 No stamina, these experimental filmmakers. As is frequently the case in the LFF’s Experimenta programmes, the feature film is shorter than usual and has to be bulked out with a couple of bonus short films. Programmer Helen de Witt decides to buck tradition by showing the feature before the supporting shorts: I’m going to unbuck it, or possibly rebuck it, by reviewing the shorts first anyway.

One of the shorts is Riar Rizaldi’s Tellurian Drama [official site], which plays around with some big ideas about the use of mountains as transmitters and sources of natural energy, without quite coming to a conclusion as to whether this is a genuine innovation or the ramblings of a madman. The other is Michelle Williams Gamaker’s The Bang Straws [clip], which has an intriguing concept at its core which is made perfectly clear in the programme notes, but isn’t referenced at all in the film itself, and that kind of makes it a failure in my book, sorry.

And so to our feature presentation, Anachronic Chronicles: Voyages Inside/Out Asia, which for all the unwieldiness of its title is the most straightforward and entertaining film of the trio. Two Asian filmmakers - Yu Araki and Lu Pan – are having a Zoom conversation in the middle of the pandemic (sound glitches and echoes included), and are getting nostalgic about their childhoods. Both of their families amassed a large collection of camcorder videos during the nineties, and during their conversation we see a series of montages that the two of them are currently editing from all that footage.

It’s nostalgic for them, and quite nostalgic for us too, given that barring the odd visit to America, the bulk of this footage comes from places we’ve visited in both China and Japan. But the two artists are responding to these images from a variety of other angles. For example, the way that in both families, it was the father who was in charge of the camcorder throughout (though we also get to see some delightful footage shot by the kids themselves). There’s some speculation on how family videos ruthlessly focus on the good things that happened rather than the bad, and the effect this is having on our childhood memories. And they also talk about their own memories of the situations in which these scenes were filmed.

It’s a lovely idea for a film, and only the rough edges of its execution push it into the experimental category. It reminds me that in a drawer back at Château Belated-Monkey, there are hours of video I shot in China and Japan in the nineties and noughties. And if I've learned one thing from Anachronic Chronicles - even with its title like a bad TV spinoff of The Terminator centered on the mother of John Connor's second-in-command Terry Chronic - it's that the shots I edited out of my holiday videos could nowadays be as interesting as the shots I left in. 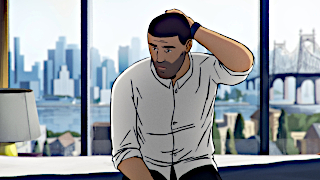 Our second feature-length animation of the festival: and coincidentally, like The Crossing, it’s a refugee story. That one was a fiction based on true events, though, whereas Flee has a more solid basis in the real world, to the extent that it won a documentary prize at Sundance. It’s based around a series of conversations between director Jonas Poher Rasmussen and his old friend from school Amin, which Rasmussen then illustrates in animated form.

Amin grew up as a fairly normal kid in Kabul in the eighties, with a fondness for Western pop music and a penchant for wearing his sisters’ dresses. But when civil war breaks out, the family is thrown into turmoil: Amin’s father disappears, and the rest of them have to arrange to get out of the country before they meet a similar fate. They make it to Moscow on a tourist visa, and plan to flee to Sweden from there. The fact that Amin is telling his story to his friend in Copenhagen is the first inkling that things aren’t going to go as planned.

For those of you counting, Flee is the fifth of the six features we pre-booked on the BFI Player to save a few quid. This one’s been the most stressful so far, as we only had a limited time window to watch it, and were getting buffering issues until we reduced the bitrate about five minutes in. So it makes it all the more ironic that Flee’s animation style is a little bit buffery itself, with the characters having a rather jerky quality to their movement while the backgrounds and live action inserts are as smooth as silk. Once I’ve confirmed it’s not a computer issue, I start to realise that what we have is another example of imperfections in the animation giving it a more human quality - it's another way of leaving some space for the viewer to add something of their own, even if it's just the movement taking place between the key frames.

Because make no mistake, Flee is a deeply emotional experience. It’s a typical tale of what refugees have to go through, with Amin’s growing realisation of his sexuality adding another level of complication. But the detail of Amin’s testimony is what makes it come alive: the importance of family, the erosion of trust in absolutely anyone, the requirement to live a double life in several different ways. I’ve seen some pretty good films this festival, but Flee is the first one where I can say without hesitation that it’s going to come very high on my list. 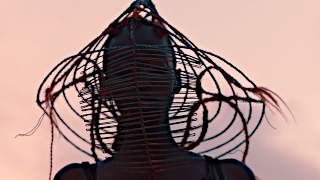 I’ve been following Saul Williams with interest since LFF 1998, when his acting and poetry were at the forefront of a film called Slam. Since then he’s dabbled in a number of other disciplines, predominantly music, his highpoint in that realm being his 2016 album MartyrLoserKing. At the time, he hinted that the album was just the first part of a multimedia project: but I never imagined that the second part would look like this.

Working in collaboration with his wife Anisia Uzeyman, who acts here as his co-director and cinematographer, Williams has written an Afro-Futurist musical that playfully revisits several of the themes and tunes from the MLK album. Set in Rwanda, it follows the story of the miners working to extract the rare mineral coltan from the ground for use in all our consumer electronics. When one of the men is killed by a mine boss, his brother Matalusa (Kaya Free) escapes his job and goes off in search of something better. He finds it in the form of Neptune, a genderfluid entity played by both Elvis Ngabo and Cheryl Isheja, just in case you thought you’d worked out what sort of film this was. They’re at the centre of a community that’s taking the power from the land and extracting it for their own purposes.

That synopsis is the thinnest possible scraping of the surface of what this film attempts to pull off. Its ambition in so many areas is vast – Williams’ music, Cedric Mizero's outrageous costumes made out of discarded technology, the sudden shifts of the story from realism to fable and back again. During the post-screening Q&A, it’s suggested that the film’s too big to be contained by a mere cinema frame, and I think that’s the main problem I have with it. But I’ll take overambition over the alternative any day. With just one day of the festival left to go, I suspect this may be the only time I get to say this: Neptune Frost didn’t quite work for me, and I think I need to see it again.