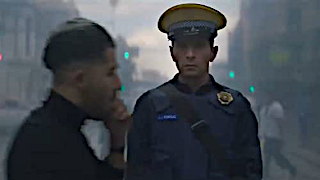 Does the festival do this on purpose? Every year, they seem determined to confuse punters by putting on two films with almost identical titles. There are probably some people who’ll book for this one thinking that it’s Cop Secret, and vice versa. It’s going to be carnage later on this week, when they have a gay soldier movie and a lesbian nun movie that are virtually called the same thing. But I digress.

This one is definitely A Cop Movie, from Mexico rather than Iceland. It’s a documentary made for Netflix that follows two Mexico City cops, Maria and Montoya. Initially they’re telling their stories of why they joined the force in the first place, and some of the adventures they’ve had on the job. But gradually, another theme starts pushing its way into the foreground: the corruption that’s present at all levels of the law and order system. It’s made Mexico a country where you can do basically anything, as long as you can afford to pay a big enough bribe to the police: an arrangement that can be weaponised in both directions.

We’ve seen a couple of radical approaches to documentary making so far this festival, but Alonso Ruizpalacios’ film might be the most extraordinary yet. There are several occasions in Cop Movie where you suddenly have to rethink everything you’ve seen up to that point. These aren’t just gimmicky narrative twists: each of them forces you to view the role of the police from a slightly different perspective. It’s not a simple pro-police or anti-police polemic, but an acknowledgement that corruption this widespread is a complex issue, and one that deserves a film as complex as this one. And it does all this while cunningly disguising itself as the sort of police procedural you’d stumble across while browsing Netflix on a Saturday night, Lalo Schifrin theme tune and all. Quite a neat trick, really. 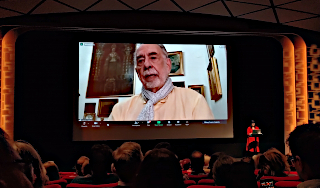 Our route to BFI Southbank takes us past the Royal Festival Hall, where the red carpet is out for all the special guests accompanying The French Dispatch. It was on the list of things we wanted to see, inevitably: and equally inevitably, it sold out within seconds. We looked for something else which would fit in that timeslot, and the restoration of a Francis Coppola film I hadn’t seen before sounded like a thing to do. Delightfully, it wasn’t announced until a couple of days ago that Coppola would be doing a live Zoom Q&A after the film. That counts as compensation for not seeing Bill Murray, I think.

But you’re right, not having seen The Outsiders before seems a bit of an omission for someone who considers Coppola's 1970s movies - Godfather I and II, The Conversation and Apocalypse Now - to be the single most perfect run of films any director's ever had. And even more so given how much I love Rumble Fish, Coppola’s other adaptation of an SE Hinton novel, filmed immediately after the first one. Coppola confirms in his Q&A that he always saw Rumble Fish as the darker, more adult sibling of the earlier film, and I guess that's what attracted me to one rather than the other back in 1983. Although there’s quite a bit of darkness in The Outsiders too, at least in this version.

That subtitle The Complete Novel is a giveaway: Coppola’s been recutting his old movies again, in the wake of his recent alternative edits of Apocalypse Now, Godfather III and The Cotton Club (we're still waiting for a UK release of the latter). His excuse is that these new versions tend to be based around the original cuts he made before the studios came in and did their own tightening. In this case, he’s put back a couple of scenes that were originally removed for timing purposes, and replaced part of his dad’s slightly syrupy score with songs from the period. (Possibly a few too many songs from the period, as it makes the film sound like a soundtrack compilation album waiting to happen.)

Still, I’m coming to the film for the first time, and apart from that minor quibble with the music this beautiful-looking 4K restoration works just fine for me. The clash between the two rival groups of 1950s teenagers – the scruffy Greasers, and the Socs from the posher end of town – has the same dramatic force as Rebel Without A Cause, showing these kids as being trapped by their class in roles that they never chose for themselves. Still, the Greasers will always come off best, if only because of the huge range of up-and-coming talent in their ranks, with early roles for Patrick Swayze, Rob Lowe, Emilio Estevez, Matt Dillon, C Thomas Howell, Ralph Macchio and an uncharacteristically goofy Tom Cruise. That Coppola guy knows a thing or two about casting. 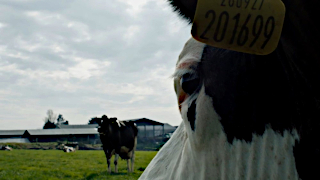 We could be on the south side of the river seeing George Clooney (his new film The Tender Bar is a late addition to the programme), but instead we’re at the ICA watching a bovine snuff movie. How's your Sunday night going?

Andrea Arnold’s documentary follows the life of Luma, a dairy cow working on a farm. We join her as she’s giving birth to a calf, whom we only get to know by her tag number 04481, like phoning outer London from another country in the early nineties. (Don't look at me like that, that's how mnemonics work.) 04481 is separated from Luma alarmingly quickly, and the rest of the film follows the two of them in parallel: the calf gradually being nurtured by farmers to the point where she can graze outside, while the mother returns to the ongoing cycle of regular milkings and the occasional reimpregnation. Eventually, the film ends where it has to end.

Cow is a beautifully crafted film, but it has a problem, and that problem is another film called Gunda. Victor Kossakovsky's documentary came out here earlier this year, and does exactly the same thing that Cow does, only with a pig: without the use of a narrator, captions or any other narrative devices, it follows a single farm animal closely and observes its day-to-day life. Both films took several years to complete, so who came up with the idea first isn't really an issue: but Gunda got released first, meaning that Cow's approach doesn't seem quite as radical as it would have, say, a year ago.

Still, once you get past the surface similarities, there are some hefty differences between the two films. Gunda was scrupulous in the way it removed all traces of humans from the story, so that the farmer's sole appearance is as surprising and distressing to you as it is to Gunda herself. Arnold's working to a different agenda in Cow, so we get to see the various farm staff dealing with Luma and her calf, which moves the focus of the film away from the animals and towards the industrial system they're trapped in. The other thing is that the lack of narrative signposts makes the viewer project their own emotions onto the animals on screen, and that projection is greater in Luma's case because her life, such as it is, has more things happening in it.

I feel like I'm making Cow sound like a hard film to watch, and it really isn't. It's breathtakingly shot, with Magda Kowalczyk's camera getting in incredibly close to the cattle, so much so that there are a few alarming collisions left in the finished movie. There's also a lot of wit in the shooting and editing: I particularly enjoyed the scene where Luma is paired up with a bull for the usual reasons, and the background sound from the radio in the cowshed almost suggests that cows use smooth R&B as shagging music the same way that humans do. I didn’t cry at the final scene: there are farmers on the Irish side of my family, so I'm not unaware of the process, and it is what it is. But some people in the ICA did cry, and be warned that it may do the same for you.