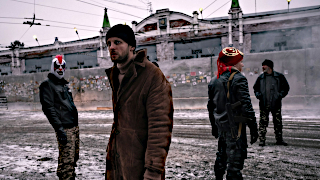 We’ve been actively avoiding pandemic-based movies this festival – starting our final day with one about a bad case of the flu is probably the closest we’ll get. Based on a novel by Aleksey Salnikov, it tells the story of a couple of days in the life of Petrov (Semyon Serzin), whom we first see coughing and spluttering on a bus in a way that’d alarm most people in the current situation. It’s more alarming when he’s randomly pulled off the bus to take part in a firing squad, which isn’t even the strangest thing that’s going to happen to him that night. Meanwhile, his estranged wife doesn’t appear to have the same symptoms, but does have a spectacular internalised rage that may or may not be externalising itself.

For the first hour and a bit – roughly, while Petrov is having his extraordinary night out - Kirill Serebrennikov’s film is enjoyable enough as a sledgehammer satire on current Russian society. Without the slightest trace of subtlety, it portrays all of the people Petrov encounters as fascist, insane or drunk (or some combination of the three). With a battery of disorientating techniques, including some epically long Steadicam takes and artful use of overhead drone shots, we’re always kept guessing as to how much of this is real and how much is the product of a fevered brain, which is as it should be.

Then about halfway through, Petrov makes it back to his wife and son, and the film more or less grinds to a halt. The manic energy that kept the first half ticking over is lost in a morass of flashback scenes that give us comprehensive backstory for things we weren’t interested in, while leaving several more important characters without any resolution to their story. That’s an awful lot of wasted time for a film that lasts a good two and a half hours. Maybe a movie that sustained the frenzy of this one’s first half would be unwatchable for other reasons, but either way it’s a disappointment. 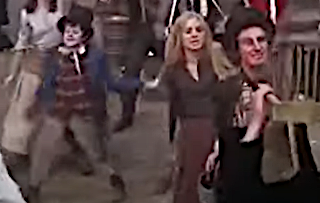 Can you remember the first film you saw in a cinema? I can: it was Disney’s Cinderella, in a double bill with one of those live action ones that all the kids hated, The Horse In The Grey Flannel Suit. And I can remember that we got trailers in the middle, particularly a big wide-screen one for Oliver!, which I guess was doing the rounds at the time.

Some ridiculous number of decades later, I’m finally getting to see Oliver! on a big screen, in a brand new 4K restoration. Robin Baker from the BFI archives has a full supporting programme included: we have a message by proxy from restoration guru Grover Crisp, and the son of producer John Wolf has some enjoyable tales from the set. But the real scoop is an appearance by one of the young actors in the film, and it’s not an obvious one. It turns out that one of Elaine Paige’s first professional jobs was as a member of the urchin chorus – she was apparently good value at the time, as she looked like a kid but was in fact old enough that they didn’t have to pay for a chaperone. (That’s her in the blonde wig in the middle of the picture, towards the end of Consider Yourself. This image is not representative of the quality of the 4K restoration.)

As for the film, there’s not much to be said other than it looks and sounds predictably glorious. You know the plot, you know the songs, you know the performances. I’ll admit that thanks to John Wolf Jr.’s introduction, I have a new-found admiration for the gigantic London street sets, all constructed at Shepperton Studios. I’ve also rediscovered my admiration for Oliver Reed’s performance as Bill Sikes: everyone else is treating the film as panto to some degree or other, but he brings genuine danger to every scene he’s in.

A quick grumble about the audience, though. There's half an hour of introductory chat before the film, including the announcement that even though we'll see an intermission card halfway through, the plan is to go straight into the three minutes of entre’acte music followed by the second half. And yet, as soon as the sign comes up, a good quarter of the audience seems to get up for a wee, causing havoc for the next ten minutes. It’s a good job that Who Will Buy? starts up Act Two pretty slowly. 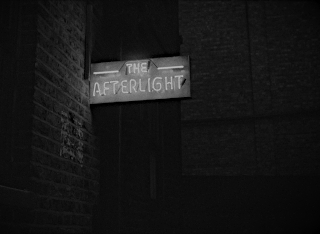 No, of course we’re not at the Closing Gala. Joel Coen’s The Tragedy Of Macbeth is all well and good, but like The French Dispatch it sold out within seconds. The only conclusion that can be drawn from this is that Frances McDormand is really popular. No worries: instead, we’re finishing off with a bit more Experimenta in NFT3. Last time I did this sort of thing on Closing Gala night, I ended up looking at a shot of the screen of a Japanese mobile phone for more than an hour. This time...

...well, as it’s an Experimenta programme, we get a supporting short to kick off, Train Again [official site] by Peter Tscherkassky. You know how some experimental shorts quietly noodle along and carry a severe risk of lulling you into sleep? Well, this isn’t one of those. It’s a whole archive’s worth of footage of trains from the Lumiere brothers onwards, layered on top of each other and intercut at stroboscopic rates, accompanied by an industrial soundtrack of railway noise and climaxing in a montage of crashes. It’s a hair-raisingly visceral experience, and a very different approach to handling archive material from that demonstrated by the main feature.

In The Afterlight, Charlie Shackleton has constructed a narrative feature out of clips from hundreds of other films. We’ve seen a couple of examples of this sort of thing in previous festivals – Have You Seen My Movie?, which depicted a typical visit to the cinema, and The Green Fog, which more ambitiously used clips to approximate the plot of Vertigo. Shackleton’s doing something different here, as he started by collecting clips and then seeing what story came out of them. He assembles his clips into vaguely thematic sequences, like several characters walking towards a bar, or getting caught in a rainstorm. Sometimes there’s dialogue involved: sometimes sound from one clip is reused in the ones that follow it (a sequence of people playing records is wittily done): more often than not, the scene takes place in silence, and becomes a concerto for room tone and surface noise. Surprisingly, it all flows together as a kind of story, although there's one too many sequences of people just walking in the dark for my liking.

It’s not until the end of the film – or before then if you read the programme notes, so I don’t think this counts as a spoiler – that you discover the intended link between the clips: all the actors we’ve seen on screen are dead, and this film’s intended as a memorial to them. Unlike yesterday’s short The Bang Straws, you can still enjoy the film as a cinematic juggling act without knowing the concept in advance.

And there’s one more bit of the concept that gives this screening an edge: the film only exists as a single 35mm print, the one that’s screening for the second time ever tonight, and there’s no backup or insurance. One audience member is audibly horrified by this news: another more devilishly handsome chap asks Shackleton if he’ll be sad when the print eventually gets damaged beyond repair, or if it was always the intended big finish to the project. Shackleton’s more interested in having a physical memorial to the actors shown, and considers the risk factor of that physicality to be worth taking. And when it leads to a festival finale as conceptually lovely as this one, I’m happy to agree with him.

Right. I’m taking a few days off from seeing films now. Come back here soon for our final thoughts in The Wrap Party. (Meanwhile, the reviews by The Cineaste that used to be on this page have now been moved to here.)