Reviewed today: The Feast, Mothers Of The Revolution, The Storms Of Jeremy Thomas. 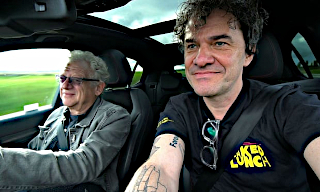 We’re continuing to embrace the hybridity. In previous festival years, we’d have averaged something like three films each day: this time round, we’re limiting it to two visits to a cinema per day (and yes, I appreciate that there are people out there who barely manage that in a year), and topping up back home with selections from the LFF’s online player. If you’re located anywhere in the UK, you can play along with us: there are short films available for free throughout the duration of the festival, and feature films available for £12.50 (£10 for BFI members) for 24 hours after they premiere in the real-world festival. You even get a discount if you can commit to watching six features online during the festival, so that’s what we’ve done, and this is the first. Although curiously, this is – I believe – the sole feature in the programme that’s only available online.

Jeremy Thomas is one of the lesser-known heroes of British cinema. Part of a filmmaking dynasty – his dad and uncle were heavily involved in the Carry On and Doctor films – Jeremy has been an independent film producer for over four decades now. His biggest success was with Bernardo Bertolucci’s The Last Emperor, but either side of that he’s been the driving behind a whole string of interesting movies by some of Europe's best directors, all of which pull off the enviable combination of displaying a sharp intelligence while managing to stay solidly entertaining. (Just have a look at this list if you don’t believe me.) He’s also had a fascinating side career producing Japanese films from the likes of Nagisa Oshima and Takashi Miike. Mark Cousins’ film has the director accompanying Thomas on a five-day road trip to Cannes for the world premiere of Miike’s movie First Love, during which they chat about the producer's life and work.

Couldn’t somebody else have made this documentary? You can kind of understand the approach that Cousins explains in the Q&A: start off with a list of all the things that you would expect from a biographical film, and then proceed to avoid all of them. But if you’re putting this much effort into swerving the cliches, you need to have something else to take their place. Cousins has a series of chapter headings announcing the big topics he wants to talk to Thomas about – Sex! Politics! Death! Cars! – but then skims across the surface of them and refuses to go into any sort of depth. All too often his questions take the form of a theory he has about a specific scene from one of Thomas’ movies, followed by “do you agree?” The sort of questions I was hoping would get asked – for example, digging a bit more into the producer’s obvious love for Japanese cinema – never make an appearance.

It’s a shame, because Thomas seems like a fascinating character, and the copious clips at least get across how he’s made consistently good choices of collaborators over his forty-odd years in the business. (Note to self: I really need to see The Hit again soon.) There’s some enjoyment to be had in the way Thomas frequently bats away Cousins’ most overanalytical statements with a more grounded approach to how he sees his work. He seems like an enjoyably no-bullshit sort of guy, and it’s disappointing that he’s being profiled by a partly-bullshit sort of one. 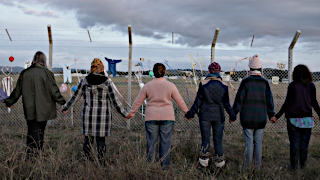 6.15pm: Mothers Of The Revolution [trailer]

Back in the cinema again, and our second documentary of the day is about a subject in which The BBG has a particular interest: the women’s protests at Greenham Common against the siting of American Cruise missiles there. It’s a story that ultimately spans a couple of decades, and director Briar March does an effective job of compressing it down to one hour 40.

Her approach is to focus on five specific women involved in the protests, and interview them to get their full story. One of them is the Welsh housewife Karmen Thomas who – like several of the women here – feared for the lives of her children if Britain became the theatre for a US-Russia war. So in 1981 she went with a group of a few dozen on a march from Cardiff to Greenham, picking up more women along the way. Once they got there, they decided to go full suffragette and chain themselves to the gates of the airbase: the first act of a nineteen year long campaign of civil disobedience which ultimately led to the missiles being removed. (Sorry if I've spoiled the ending for you.)

Surprisingly, it’s a very cinematic film: March has gone for a widescreen aspect ratio, despite all of the footage from the time being shot in 4:3 for telly. Where no footage exists, she's used actors to recreate some of the key events of the campaign. I’ve complained in the past about the use of this technique in documentaries (see, for example, last year's film about Delia Derbyshire), but here it works: the key is to keep the acting to a minimum, and remember that you're using this as illustration rather than trying to create a dramatic scene. The careful matching of the actresses' costumes with the clothes we see the real women wearing in archive photos helps sustain the illusion.

As one man says in the Q&A afterwards (in a rare example of the sentence 'it's more of a comment than a question' not being followed by several minutes of self-indulgent windbaggery), the Greenham women got a raw deal from the media at the time, and this feels like the first opportunity they’ve had to tell their own stories. They’re stories worth hearing, too: from their tense attempts to meet up with their Russian counterparts, to the hilarious way they invaded the control tower at the base without really trying too hard. And as the neat closing montage suggests, the women ended up being the first wave in a new era of female-led activism that’s still going on today. 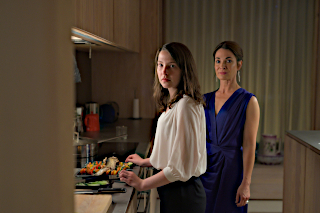 A Welsh language horror movie? Yeah, sign me up for that, please. There’s a dinner party with a hidden agenda about to take place at the home of a family whose names creepily all start with the letter G. Their flash modern house reminds you of nothing so much as the one from Parasite: as such, it doesn’t surprise you to learn that these are people who are too posh to cater for themselves. Their usual girl is away, so replacement Cadi (Annes Elwy) has been sent in her place. All the family members are so preoccupied with their own problems that nobody notices Cadi quietly observing everything that's going on.

Director Lee Haven Jones and writer Roger Williams say in the post-film Q&A that after years of working in local television, they wanted to make a Welsh language film that was capable of travelling outside Wales. Given that the only official site I've been able to find for The Feast is advertising its American release, I think they’ve ultimately succeeded. It’s a close run thing, though, given the sheer slowness of its opening: the first half is all snail's pace crawls between the rooms of the house, or long sequences of Cadi just staring ominously at things. With so little apparently happening, it’s possible for you to get distracted by minor details, such as the realisation that there’s no Welsh word for pak choi.

Even then, though, there are early hints of what’s to come, as you come to realise just how many sharp objects this house has in it. And once the dinner party gets underway, things escalate to a spectacular degree. The huge contrast between the restraint of this film's first reel and the insanity of its last one may well put people off: but Jones and Williams have total control of the story's pacing, holding back from revealing exactly where it's going until it's too late for you to do anything about it. It's the first entry we've seen in this year's First Feature Competition, and it'll be interesting to see how the other entrants compare against it.