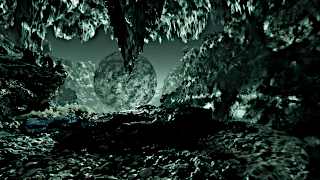 Last year, the festival used the cover of the ongoing chaos to sneak in a new programming strand: LFF Expanded, looking at the new opportunities for image making provided by virtual reality and similar technologies. The main part of that thread was a collection of VR films on display at BFI Southbank. You may remember that I wasn't impressed, mainly because the technology simply wasn't good enough. You were given your own workstation and headset, and left to navigate a clunky virtual interface between all the films, meaning you spent more time 'walking' between content than actually watching content. To add insult to injury, the whole setup crashed on me a couple of times in the measly hour long slot I'd been allocated.

You may be wondering why I came back this year, and I'm not entirely sure myself. But the Expanded programme has been completely rethought, and it's all for the better. There's now a large exhibition area located in fashionable venue 26 Leake Street, where there are sets of workstations each dedicated to a single film - you navigate between the films by literally walking around the building, which is a much more sensible solution. The tech is a lot more stable this year, too. It comes in multiple flavours this time - still images that are enhanced when viewed with an app, gallery-style pieces, some installations involving live performance - but I've chosen to stick with linear films viewed via a headset, like some sort of common caveman. As these are all films with a fixed length, I can carefully budget my use of the 90 minute timeslot, and get to see four complete pieces.

I made a beeline for Hsin-Chien Huang's Samsara [trailer], partly because there were headsets free when I walked past it, partly because its creator has form - he worked with Laurie Anderson on To The Moon, the VR installation that was one of my highlights of the 2019 Manchester International Festival. This is a similar flythrough into an unfamiliar world, taking a gigantic story - a group of people leaving a dying earth and going through several stages of evolution - and visualising it in staggering detail. It uses the most complex technology of all the films we see here, with hand controllers giving you the ability to literally watch your arms changing into something... else.

Asif Kapadia and Nick Abadzis’ Laika [trailer] has a similar level of name recognition – we all know Kapadia from his documentary work, while Abadzis’ graphic novel about the legendary space dog is the original source material for this film. His cartoony drawing style is adapted here into more rounded 3D animation, with some ingenious uses of the 360 degree space. In his novelisation of Once Upon A Time In Hollywood, Tarantino geeks out over a shot in Rosemary's Baby where Polanski's framing physically persuades the viewer to lean to one side, convincing them they could see around a corner if they tried hard enough. Kapadia pulls off a similar shot here, except this time you can actually see around the corner. My one disappointment with Laika is that her story didn't hit me as much emotionally as I'd hoped: I wondered if the novelty of the technology gets in the way of an emotional reaction.

And then I saw Jakob Kudsk Steensen’s Liminal Lands [official site], which hit me at a totally emotional level. It probably helps that it's a non-narrative piece, a 20 minute series of surreal morphing landscapes. Unlike the previous two films which you watch on rotating seats (to get the full benefit of the visuals totally surrounding you), Liminal Lands is watched standing up. (You still run the risk of rotating full circle several times and garrotting yourself with the headset cord, though,) There's something, I don't know, decadent about standing there with your hands in your coat pockets thoroughly convinced that you're in these impossible places. The most astonishing moment of the whole exhibition for me is when halfway through this film, your point of view is slowly elevated, and it feels like you're literally being pushed upwards through your feet.

That makes for three successes out of three, so it doesn't feel quite so bad that my last film is a bit of a letdown. Atomic / Ghost In The Atom, credited to Felicia Honkasalo, Akuliina Niemi and Masi Tiitta, has a fascinating idea at its core, with its depiction of an enormous subterranean nuclear waste disposal facility. The sections set there are reminiscent of the excellent documentary Earth we saw in Sheffield a couple of years ago, and I was hoping for more of that sort of thing and less of the wanky narration and dance sequences. Still, three out of four is a massive step forward from last year, and it'll be interesting to see where this strand of the festival goes next. If you're in the area, there are still slots bookable at 26 Leake Street from now till Sunday 17th. Just be careful with the technology: I didn't realise until I caught sight of my reflection in a Lower Marsh cafe window half an hour later that VR helmet hair is a thing. 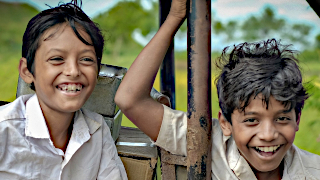 Sometimes you wish that filmmakers would have the nerve to leave their titles in their original language, rather than coming up with an English equivalent that isn’t quite as good. Here, for example, we have a film that definitely is about two friends: but the Bengali title is Dostojee, the general term of endearment they use all the time to address each other instead of their names, and for me that works better.

Their names are Safi and Palash (played by Arif Shaikh and Asik Shaikh respectively), two boys living next door to each other in a north Indian rural village. With racial tensions rising across the country, there’s an antagonism between the Muslim and Hindu communities in the village: one side builds a mosque, the other decides to erect their own idol statues close by. It’s the boys' own bad luck that they live on opposite sides of this divide.

This is Prasun Chatterjee’s feature debut, and it’s a delightfully subtle piece of work. There’s a heavy focus early on on a couple of real-life racially motivated incidents, which are then never mentioned again: they’ve done their job in setting up the conflict that’s going to affect the boys' friendship, even though the events took place hundreds of miles away from where they live. There’s a welcome absence of sentimentality and melodrama throughout the film: at one point there's an incident which in most other films would be the climax, but here turns out to be just the start of s whole new thread to the story. It makes for an unusual structure to the film, but Chatterjee's in total control of where it's going throughout. It’s been noted that this year has been a good one for child actors, and Asik and Arif Shaikh should both be added to the list of names to watch: their performances, like the rest of the film, avoid the usual cliches and make this a totally compelling tale. 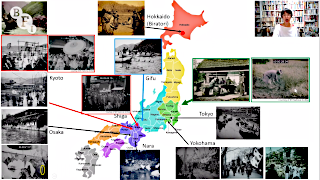 10.10pm: Around Japan With A Movie Camera [full programme]

Most years, the LFF films are frequently preceded by a trailer for whatever blockbuster season the BFI has planned for immediately afterwards. This year, it's Japan 2021: 100 Years Of Japanese Cinema. (It was originally called Japan 2020, but, well, you know.) As a wee taster for the season, and to give us our token bit of silent film for the year, they've put together this little collection of shorts and fragments made by Western filmmakers (generally British or French) visiting Japan at the beginning of the 20th century. Thankfully, unlike the rest of the shorts programmes they've put online, they haven't preceded each of the 15 films with the LFF trailer. (Though we do get an excellent series of introductions to the programme as a whole, including some terrific work from Japanese archivist Mika Tomita, who puts a location to all these clips using the map shown here.)

All these films were made between 1901 and 1913, and their primary aim was to show Western audiences a part of the world they'd never seen before. These days, it's hard to view them in such an uncomplicated fashion. For a start, filming techniques were in their infancy, so a lot of the time the filmmakers just plonked a camera down somewhere where they knew some interesting stuff would be passing in front of it: anything from a parade of schoolchildren to a funeral procession, as long as it moved and looked exotic, that would do. The cutaway to a closeup wasn't part of the grammar back then, and that makes some of these films a bit frustrating. At one point in a festival parade, a splendidly dressed geisha walks by on those massive shoes they sometimes have, and you find yourself wishing that the camera could give us a better look at her: but our viewpoint's locked down completely, and she just moves on and out of frame. There's a film in the middle of this selection called Shooting The Rapids On The River Ozu which is a genuine surprise for two reasons. Firstly, it's partly shot from inside one of the boats, meaning we have the shocking appearance of a moving camera: secondly, it's been prettified up with some delightful hand-tinting. (A few of the films here contain after-the-fact colour, some of which do the job better than others. See me afterwards, Some Japanese Temples.)

The other thing you can't avoid is that these are films made by Westerners who'd never seen anything like Japan before. Thankfully this selection carefully avoids any out-and-out racism, but there's a lot of patronising going on in the captions: Among The Japanese manages to be condescending to both the Japanese women on screen and the English women watching it. Japanese Types (which pretentiously announces itself as 'The Japanese Film') is structured almost like a wildlife documentary, showing us scenes of 'a Japanese family going on a Sunday walk' which actually look more like 'a Japanese family staring at the Westerner and his unusual whirring machine'.

Snark aside, there are some fascinating images on display in this collection: when Picturesque Japan shows people in traditional dress walking over a bridge carrying umbrellas, you realise that you've seen this sort of scene in Hokusai paintings, but this time it's moving. The more traditional films following people at work - rice growers and cormorant fishermen - are genuinely informative, although The BBG points out that the cormorant fishing one is very obviously staged for the camera, as typically those fishing trips take place at night and there's no way that could have been captured on film back then. And in the short fragment depicting The Ainus Of Japan - the country's indigenous people, whose numbers are dwindling rapidly - there's the chance to see a way of life you won't see anywhere else. After its festival run, this collection's going into the BFI Player's free catalogue as well as onto YouTube, so there are plenty of ways you can see it for yourself.