Reviewed today: Boiling Point, The French Dispatch, Passing, The Phantom Of The Open. 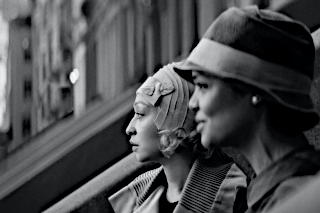 We’ve just passed (no pun intended) the halfway point of this year’s festival, so I think we can indulge ourselves with a little aspect ratio geekery. In recent years, the LFF trailers have been assembled from a series of clips from the featured films, and this year’s is no exception. But they produce it in three different versions, reframing for three different screen shapes: the usual 1.85:1, the wide-screen 2.35:1, and old-fashioned 1.33:1. Passing is the first film we’ve seen this year which requires the 1.33:1 trailer, and it’s fascinating to realise just how many aspect ratios are in use these days: the almost-square format emphasises how the black bars at the top and bottom of the screen are changing size for nearly every shot, to accommodate the three usual ratios and a couple of others in between. Just me, then? Okay, forget I said all that.

Passing is set in 1920s New York, at a time when 1.33:1 would have been the only format in town. A chance meeting reunites two old school friends, Irene (Tessa Thompson) and Clare (Ruth Negga). Irene lives in Harlem with her doctor husband, and is doing pretty well. Clare, however, is doing even better, because she’s light-skinned enough to fool a white businessman into marrying her. As Irene and Clare renew their acquaintance and start spending more time with each other, Irene starts to realise how much life requires you to take on roles that aren’t necessarily the real you: “we’re all passing for something...”

Based on a novel by Nella Larsen, Passing is the directorial debut of actress Rebecca Hall, whose own racial background I’d never even thought about until, um, just now. It's an unblinking look at the practicalities of how race works in America, and how just the smallest difference in skin tone (made even smaller by Hall's decision to shoot in monochrome) can make a huge difference in someone's quality of life. It’s built around a couple of powerhouse performances by Thompson and Negga, with good support from Andre Holland and Alexander Skarsgard as the men in their respective lives. There are some excellent digressions into the thornier aspects of racial identity, the best ones sparked by Bill Camp as the white novelist sniping from the sidelines, as white people flock to Black parties for anthropological interest as much as anything else. Sadly, the film loses it a little in the final minutes as it reaches for an ending but doesn’t quite make it: but until that point it’s a satisfying and thoughtful piece of work. 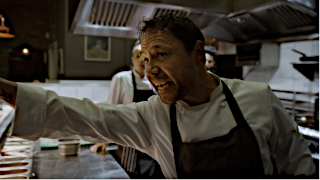 Single-take movies were all the rage a year or two ago, and now they’re not. I suspect that the genre was killed off by 1917, which cheated horribly because it’s very obviously shot in two takes. I want to see a director’s cut of 1917 which includes the bit in the middle where we look at an unconscious George MacKay for seven hours in real time. Just me, then? Okay, forget I said all that.

It’s fun – and also alarming – to discover from the Q&A that Boiling Point’s already tense shoot was made even more tense by taking place in March 2020, as the crew raced against time to get the perfect take before all movie production was shut down by Covid. Happily they managed it, and apparently without any tricksy stitching together of multiple takes either. Philip Barantini's film follows head chef Andy (Stephen Graham) on one night in the life of his fashionable Dalston restaurant (note to self: it's this one). He’s already got multiple pressures in his home life, and on this particular night both his staff and his customers are going to make things even worse.

Shooting in a single take isn’t just a gimmick – it gives a constant one-damn-thing-after-another momentum to the story, while still allowing the space for moments of calm in between the individual crises. Sure, it’s very obviously several years of the director’s own experience in the hospitality industry crushed down into ninety minutes, and some of the plotting required to achieve that is a bit shonky, notably the introduction of Chekhov’s Nut Allergy in the first act. But it’s that compression that makes the film work, as well as the joy of seeing people working together to pull off something extraordinary.

That goes for the kitchen staff in the film – well, when things are working, at least – but also for the people in front of and behind the camera, with Stephen Graham’s blend of toughness and vulnerability a perfect match for the role. Three cheers too for Matthew Lewis' constantly roaming camera, albeit with the slight regret that my rickety old PC couldn’t stream all of its fast-moving images without going into buffer mode every so often. 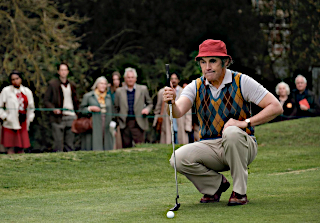 Oooh! A proper world premiere tonight, which means we get to go into the Royal Festival Hall via its fanciest entrance and walk on the red carpet for a few yards. (Although in this case the red carpet is green, for reasons which should eventually become apparent.) We’ve got a tiny personal connection to this one, as parts of it were filmed last year quite close to Château Belated-Monkey. It has to be admitted, though, that there are people at this premiere who have a much closer connection to the film, all the way up to the man introduced on stage as "the next James Bond, Mark Rylance,"

This is the true story of Maurice Flitcroft – not a story that I remember personally, even though I was around at the time, but I’ve no reason to doubt that it happened. Flitcroft is a shipyard worker in Barrow-in-Furness who decides to enter the 1976 British Open, despite never having played a round of golf in his life. In the qualifiers, in front of a television audience, he sets a record for the worst score in the tournament that still hasn't been beaten to this day. And then things just start to get silly.

For the purposes of cinema, Flitcroft's story has been elevated into a parable about following your dreams and believing in yourself. You could imagine just how horrific a big Hollywood version of this could have been. But here, director Craig Roberts and writer Simon Farnaby have got the balance just right: never ridiculing Flitcroft for his self-belief, while acknowledging the ridiculousness of his attempt and revelling in the anger it caused to people in authority. Having Mark Rylance play Flitcroft helps enormously: on the surface, he's all wonky teeth and a comedy Northern accent, but there's a huge attention to detail in the way his can-do optimism occasionally slips to reveal a man who suddenly realises how out of his depth he is.

It’s a complete one-off in its mixture of styles - slapstick comedy, wild fantasy, sentimental family drama and inspirational sports picture - and utterly unclassifiable. Possibly literally so in the case of the BBFC, who'll have to work out what rating to give to a family film that has half a dozen f-bombs in its script (only one of which really needs to be there, because it's perfectly timed and delivered by Rylance). Like Flitcroft himself, you're not quite sure why The Phantom Of The Open is there, but it's nice that it is.

The Cineaste - Originally conceived as a foreign foodie supplement for a heavyweight Kansas newspaper, The French Dispatch (formerly The Picnic) has grown in stature and scope of coverage to become a revered publication in its own right in the imaginary French town of Blase-sur-Ennui (! - the town's name itself gives a strong hint of the tone of the film). But now, alas, its respected founder and driving force has passed away. With the publication losing its sense of purpose and direction, it too looks set to pass into history. Before doing so, its reporters and staff gather for one last hoorah to reminisce fondly about the halcyon, good old times - of which there were many, many memorable ones.

Oh, what an exuberantly quirky composition Wes Anderson has made here. The storylines themselves are almost - almost - incidental, it's the manner in which Anderson tells 'em that makes this film what it is. And the cast - terrific - including, amongst others, Tilda Swinton, Frances McDormand, Jeffrey Wright in a fabulous caricature of a role, a rambunctious Benedicio del Toro (imagine if Ernest Hemingway had been a painter, del Toro's character would be he), and Lea Seydoux. Put them all together in a large pot, stir well and simmer gently for 108 minutes, and this scrumptious concoction is what you get. Bon appetit!