Let's say this out loud rather than pussyfooting around the subject, and see if anything happens. In 2019 we saw The Juniper Tree, a folk tale so traditionally Icelandic that it had Bjork as its leading actress. In that review I said "Iceland is on our minds at the moment: let’s just leave that bit of information hanging for now, and come back to it in the future." In fact, at the time we were planning a big holiday in Iceland, scheduled for summer 2020. Then the world turned to shit, and we had to postpone our trip to 2021. Then the world stayed to shit, and we had to postpone it again to 2022. When it eventually happens - and it will - then you'll doubtless hear about it here. But in the meantime, we're continuing to dabble in Icelandic culture as a sort of preparation.

Which is why my first experience of LFF 2021 involves visiting the Curzon Soho and marvelling at how the gents toilet is full of Vikings. It turns out that this screening of Cop Secret is something like the second one ever, and so virtually all of its cast and crew are in attendance: they're packing out row H, widely accepted to the best row in screen 1. Lead actor Audunn Blöndal is in the seat next to The BBG, while director Hannes Thór Halldórsson is directly in front of us. As if this wasn't exciting enough, it transpires that Halldórsson’s day job when not making films is playing in goal for the Icelandic national football team. The highlight of an enjoyable Q&A is when Blöndal takes the mic and asks Halldórsson to talk us through the penalty he saved against Lionel Messi.

The film Halldórsson literally made in between football seasons claims to be Iceland’s first action comedy, though it potentially has some other claims to fame too. It’s the story of self-proclaimed supercop Bússi Bödvarsson (Blöndal), whom we first see in a reckless high speed pursuit of a bank robber – one that’s quickly curtailed when they reach the city limits of Reykjavik, and he has to hand over to his rival on the neighbouring Gardabaer force, Hördur Bess (Egill Einarsson). Bússi is a gambling alcoholic who doesn’t play by the rules: Bess is a media-friendly smoothie who speaks fifteen languages ("but not Danish, out of principle") and always gets his man. Inevitably, the two have to pair up.

This is a hard film to get a handle on, and certainly far from the uncomplicated fun that the festival’s selling it as. The humour is ridiculously goofy in parts – at one point early on, the closest reference point I could come up with was National Lampoon’s Loaded Weapon – but it’s interwoven with some genuinely harsh bits of graphic violence, virtually none of which is played for laughs. The last time I saw a film that was this tonally inconsistent, it was made in Hong Kong. You’ll appreciate that for me, this isn’t necessarily a criticism.

Still, when you get to the one trope of buddy cop movies that the film decides to really push to the limit, you start to get worried that it’s going to stop being fun altogether. Happily, it never crosses the line, and makes something genuinely touching out of what happens to the two cops. And in the depiction of the bad guys – a boss with a ludicrous vocal affectation, and a team of henchpeople who understand the penalty for questioning his orders but keep doing it anyway – there are plenty of more straightforward genre-spoofing laughs to be had. But the less straight bits are more interesting. 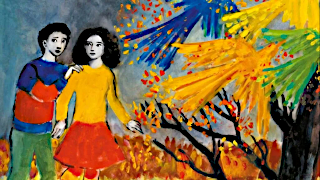 New thrill! Well, newish. Longtime followers of this site’s LFF coverage will remember that in the old days, the Odeon West End was the festival’s main hub in central London. After a long, drawn-out period of winding down, the cinema was eventually closed in order to be demolished and turned into a fancy hotel. But it turns out that part of the deal was that the new hotel had to have a replacement cinema in it. A couple of weeks ago, that cinema finally opened – the Odeon Luxe West End, constructed on the site of the old one, or more accurately a couple of stories underneath it. On the basis of a single visit to the bigger of its two screens, it’s a fine addition to Leicester Square, with lots of big comfy widely-spaced leather seats in the currently fashionable style: it may still have that new cinema smell, though it’s hard to tell with a facemask on.

Our first film in this new cinema is a feature length animation, partly in compensation for the LFF’s continued failure to have a regular slot for grown-up animated shorts. In it, the elderly Kyona looks back at her teenage years in eastern Europe, and how martial law forced her and her family to flee the country. Shortly after the start of their journey, Kyona and her brother Adriel are separated from the rest of their family: and then their troubles really begin.

Narratively and visually, this is quite a thing. Animator Florence Miailhe wisely keeps the location of her story as vague as possible, and the same goes for the time period in which it's set. It’s not until the appearance of a mobile phone some way into the film that we even consider that this could be anything other than a historical piece, despite enforced migration being a hot topic right now. The film starts off in a realistic register, with the teenagers' rural idyll being cruelly overturned by the soldiers: but before too long it’s almost operating at the level of a fairytale, with wicked stepparents and an old crone with mysterious powers.

That narrative flexibility also applies to the animation, which is all done using oil paints on glass – a style we’ve frequently seen in short films before now, but never in an entire feature, presumably because it’s so time consuming. It gives the background and characters a vibrantly distinctive look, and allows Miailhe to slip into impressionistic stylisation with just a few sweeps of the brush, notably in some beautiful transitions between scenes. Everyone’s trying to make animation more photorealistic these days, and a film that’s so determined not to go down that route – leaving plenty of scope for the viewer to add their own interpretation – deserves to be applauded.