Living For The Weekend: A 2022 Diary By The BBG 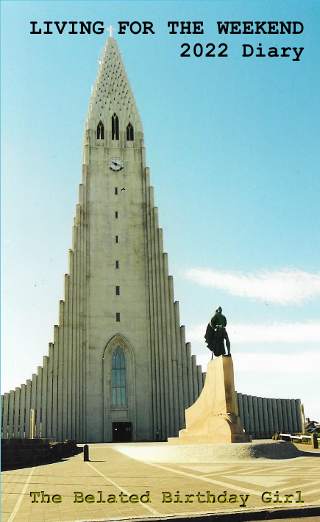 As if the Christmas Day excitement of the 40th Pick Of The Year compilation wasn’t enough, there’s one more milestone to mark off before the year’s out. Because this week sees the tenth anniversary of the publication of the first edition of Living For The Weekend, the diary designed by The Belated Birthday Girl and published by the good people at lulu.com.

Predictably, she's celebrating this anniversary by publishing the eleventh edition. Living For The Weekend: 2022 Diary is now available for £3.99 plus postage and packing, and if you know what all that's about just click on the link and buy one right now. If you don't, details follow.

The 2012 version of Living For The Weekend wasn't that much different from the 2022 version. The BBG's plan all along has been to correct the fundamental flaw with most diaries on the market - the way that most of their space is dedicated to the working week, leaving too little room for all the fun stuff you have planned for the weekend. Her diary has a two page spread for each week, where one page is devoted to Monday to Friday, while the other gives you plenty of space for Saturday and Sunday.

Regular readers will know about another feature of the Living For The Weekend diaries. Each year, The BBG allocates two pages for a specific project, where you can document your attempt at achieving twelve of a particular task. Obviously, in recent years the idea of achieving anything has become rather unfashionable. After the debacle of 2020's project - attending twelve concerts by previously unseen artists, something which became impossible after mid-March of that year - she decided to set her sights lower for the project in the 2021 diary. As documented at the time, her aim was simply to do twelve things that you couldn't do for most of 2020. I'm pleased to report that both she and I managed to achieve this, as follows:

Say what you like about 2021: at least it's an improvement on 2020, because shit got done. In fact, I have to tell you at this point that the 2022 diary has been on sale at lulu.com since December 21st, and the only reason you haven't been told about it till now is because we've been out and about doing even more stuff for Christmas (in a responsible fashion, obviously). I'll probably tell you more about that shortly.

In the meantime, if you buy the 2022 diary, you can take part in The BBG's latest project. Remember how in 2016, the project was to visit twelve brewery tap bars? Well, that worked well, and since then loads of new ones have opened, so we're going to do it again. Limited to breweries we've never visited before (so nothing on The Bermondsey Beer Mile counts), and including tours of the brewery where possible. Come back in a year or so and see how we got on.

In the meantime, Living For The Weekend: 2022 Diary is available for £3.99 plus postage and packing from the link near the start of this paragraph, or the thumbnail below, or the thumbnail in the right sidebar. Also, if you go to my Lulu bookshop, you can also buy the previous ten diaries for a similar price and collect the set. What's stopping you? Don't answer that.