Home Archives/Categories About Me RSS Feed Mailing List Email
Living For The Weekend: A 2022 Diary By The BBG
Picks Of The Year 1982 - 2021: The Video Playlists 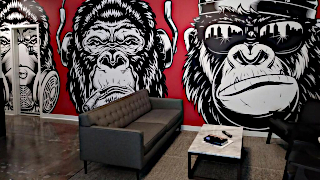 Comedy: Happy New Year, everyone. Most years, as regular readers will know, we tend to spend the evening of December 31st in one of London’s finer comedy clubs. This time, for the second year running, we compromised with an online comedy night courtesy of Siôn James and his Collywobblers Comedy Club. Apparently James has been running Zoom gigs throughout the pandemic, and it shows in the sharp organisation of this show with a remote audience of over 60 attending: four fine acts (Patrick Monahan, Fiona Allen, Miss Mo' Real and the tireless Marcel Lucont, the latter doing his fourth gig of the night), a bit of musical silliness from Tony Ukulele to take us up to midnight, and then a rather lovely kitchen disco to follow, made all the more fun by the punters who left their cameras running (us included). And unlike Hampstead Comedy in 2018-19 and Good Ship Comedy in 2019-20, Collywobblers' DJ actually played some Janelle Monae when we asked, giving them a massive head start as our Best Comedy Club Of 2022 So Far. Ivor: Ben: the bar has been set.

Telly: Our Christmas was a mixture of being out and about for part of it, and locking ourselves in at home for the rest. For the second year running, we took out a one-month subscription to Disney+, the plan being to binge watch all the interesting stuff that’s been released there over the last twelve months and then cancel before they can take any more of our money. We had several Marvel series in there, inevitably. WandaVision plays wonderfully with your expectations, starting from the basic premise of two Avengers characters living in a 1950s sitcom and taking some ingenious detours along the way: it’s a shame that in the end, it all builds to the usual zappy explodey bollocks. Hawkeye does the same to some degree, but the charm of the leads and the relatively small scale of the explodey bollocks help it go down nicely. Meanwhile, M.O.D.O.K. (created with the help of the Robot Chicken people) rudely sends up the whole genre while obviously still being totally in love with it. In non-Marvel programming, the big new release is Get Back, in which Peter Jackson reedits the footage from the Let It Be sessions to make the Beatles look less like arseholes (though he doesn’t quite succeed with Lennon). There’s definitely enough terrific material in here to justify Jackson tearing up his original plan to make a two hour film, but not really enough to justify an eight hour series: at this length, it’s more for Beatles obsessives than a general audience. Finally, Steve Martin’s Only Murders In The Building is a delight for anyone who found that Knives Out left them with a particular itch that needed scratching. Yes, I know that The Book Of Boba Fett has just launched as well, but that’ll have to wait till next year’s one month sub now.

Travel: As for the out and about bits of Christmas, for the second year running we booked ourselves into a central London hotel for a few days. Last year, thanks to the late announcement of lockdown, we had to postpone our stay at the Resident Soho: this year, I’m pleased to report that our stay at its relative in Covent Garden went as planned. We’ve had several London Christmases before, but this was my first one in the centre of town, and it’s fascinating to see what stayed open on the day. Short answer: all the tourist eateries – steak houses, Cafes Concerto and the like – plus lots in Chinatown and virtually nothing in Soho. Oh, and all those money laundering joints that pretend to sell American sweets apparently never close, ever. The biggest surprise was finding the Cineworld Leicester Square open on Christmas Day, possibly the only cinema in London doing so. So we ended up spending three hours of the day being disappointed by The Matrix Resurrections, though to be fair that’s what we were expecting to happen. We got in a couple of bits of Christmas live entertainment too, despite everything. The more traditional one was Carols By Candlelight at Cadogan Hall, with a full orchestra in Mozart wigs and Peter Davison reading from Dickens: the less traditional was Two Turtle Doves at the Crazy Coqs, a cabaret of Christmas songs performed by Barb Jungr (who has a lovely festive song in her back catalogue already) and Dillie Keane (who doesn’t). Add in three very nice dinners (at J Sheekey, Kutir and 28-50), one decent brunch (at Madera), a fun exhibition about the Beano and some fancy cocktails adjacent to the Crazy Coqs at Bar Americain, and that seems like a pretty good three days for a city that’s largely shut on Christmas Day.

In the meantime, your Simian Substitute Site for January 2022 is Crafty Apes, a full-service visual effects company. Beginning as a VFX studio for film and TV, Crafty Apes has grown to include a talented roster of creative and production supervisors that offer set supervision, VFX consultation and high-end CG and previsualization services, or at least that's what it says on their website. (The photo above is of their Atlanta office.) To be honest, I'm doing this page in a bit of a rush late on January 1st, and was struggling to find a relevant site. But this afternoon we had the traditional Spank's Pals New Year's Day outing to the cinema, and Crafty Apes did the VFX for Licorice Pizza, so I've gone with that. (The film's okay, I guess.)

This month's going to be a relatively quiet one, but there should be some stuff on here during it. Feel free to whinge in the comments box below if there isn't enough content for you.

Great stuff as per, Spank.
Happy New Year to you and BBG!