Simian Substitute Site for April 2022: A Boy Lighting A Candle In Company Of A Monkey And A Fool 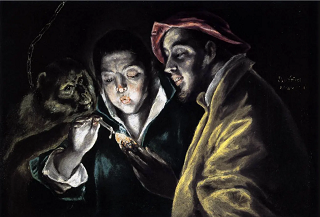 Books: We barely knew who James Acaster was before our year-long Taskmaster bingewatch: now he’s a fixed part of our aural landscape. We’re regular listeners to Off Menu, his foodie podcast with Ed Gamble, and this month we also caught up with the audio version of his book Classic Scrapes. The introduction explains how this book has effectively gone full circle. It started as a feature on Josh Widdecombe’s radio show, where Acaster told stories about the scrapes he'd got into throughout his life: those stories were adapted into book form: and then Acaster was recorded reading them out loud again. It works perfectly for the pre-bedtime slot we use for audiobooks - the chapters are short and punchy, and Acaster balances his conversational delivery style carefully so it's not too stand-uppy and not too much of a dry reading. The first chapter in particular is a perfectly constructed short story rather than a routine: some deep thoughts on what it's like to get into trouble for the first time in your life, mixed in with several amusing digressions from the point, and capped off with a terrifically concise punchline. Not all of the stories match up to that early peak, but enough of them do. I suppose the next thing to do at some point is see what his stand-up's like.

Movies: Eight years ago in this very slot here, I wrote about Otway: The Movie, a film about John Otway that was unique for being released as a series of one-night-only screenings, with the film's subject personally in attendance for every one. In March 2022, it suddenly felt less unique, as we saw two new(ish) films in very similar circumstances. Rebel Dread is more or less an authorised biography of Don Letts: the guy who was at all the early punk gigs with a movie camera, and moved on to playing with Big Audio Dynamite, DJing and all manner of other roles. It's an entertaining romp through his life, but you can't help feeling some bits of it are being glossed over, apart from a few references to his regular habit of keeping a couple of girlfriends on the go at the same time. Still, his charm is front and centre throughout the film, and it's also there in the Q&A we got on the day. Letts' presence at cinema screenings is really just a neat way of drumming up interest in a film that's already available to view on demand: by contrast, Michael Cummings has to personally accompany his film Oxide Ghosts: The Brass Eye Tapes because large chunks of it are possibly actionable. As director of the 1997 TV satire Brass Eye, Cumming was responsible for getting the ideas of Chris Morris onto screen in as intact a form as possible. If anyone could be bothered reissuing the show for its 25th anniversary, Oxide Ghosts would be the bonus feature, an hour-long compilation of sketches and scenes deleted from the show for reasons of time, decency or libellousness. If I've made it sound like a collection of cutting-room floor scraps, think again: because this is all top-grade Morris material, and reminds you that the loopholes he used to get unspeakable concepts onto terrestrial TV have all been subsequently closed off. As a result, this film can only ever be shown in screenings like this one: but Cumming insists that he's prepared to keep touring the film as long as people want to see it, so keep an eye out for those 30th anniversary shows.

Music: A batch of ten (or is it eleven?) new things for you to listen to, either via the YouTube links in the text or the Spotify playlist underneath.

In the meantime, your Simian Substitute Site for April 2022 is A Boy Lighting A Candle In Company Of A Monkey And A Fool, or more accurately the page on online art archive Arthive dedicated to the painting of that title by El Greco. Well, that's what they're calling it, at least. If you follow the link on the page that tells you where you can currently see the painting for yourself, you eventually end up at the National Gallery of Scotland, and they're saying it's called An Allegory (Fábula). Anyway, at the very least this'll be the classiest fool-related thing you see on the internet today.

Apologies for it being a bit quiet around here in the past month: I did a fair bit of stuff (including all of the above, plus the brilliantly restored Godfather trilogy at the cinema, a cheese and beer tasting, and an unrelated artisanal cheese-making course), but none of it seemed to justify a full blogpost on its own. Happily, we have a couple of busy busy weekends planned in April, pandemic permitting, so there should be a bit more activity soon. How about you? Comments box open below, as ever.