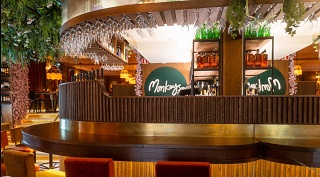 MONTH END PROCESSING FOR MAY 2022

Books: You've heard the album, you've seen the "emotion picture," now read the book. Or, in our case, listen to it. The Memory Librarian, And Other Stories Of Dirty Computer is Janelle Monae's latest excursion into her own personal sci-fi universe: a dystopia in which people's memories are erased to remove all traces of deviation, where deviating from the traditional gender binary is possibly the worst crime of all. For the book version, Monae's collaborated with five other authors to produce five stories set in her world. We're two stories into the audiobook so far, and neither of them has quite worked. The Memory Librarian itself (co-written with Alaya Dawn Johnson) opens the book, and is so crammed full of worldbuilding that it doesn't leave enough room for anything much to happen. Monae reads it nicely, though, something you don't appreciate until Nevermind (co-written with Danny Lore). Set on a retreat where a group of renegade women are hiding out, there's plenty of incident and character to go around. But it's read by Bahni Turpin in a curiously over-emphatic style, which makes you feel like you're being read this gender-progressive Afrofuturist fable because it's good for you. "Did you see, children? Neer is using non-binary pronouns." Still, the multi-author, multi-narrator anthology format means that anything could happen in the remaining three stories, so hopefully I can report back next month on how the rest of the book plays out.

Music: It's the textbook definition of a superspreader event: two and a quarter thousand people in the London Palladium, and The Divine Comedy are about to launch into the chorus of National Express. I'm afraid that by now you've missed their 2022 European tour shows, ruthlessly built around the recent Charmed Life compilation: as Neil Hannon described it, "no weird stuff, just the... [long pause, dramatic air quotes] ...'hits'." So rather than bang on about how predictably brilliant a show it was (other than to show you a cheeky video of Perfect Lovesong, featuring the best sight gag of the night), let's talk about Super Extra Bonus Album, which I tangentially referred to here two months ago. It's a traditional dodge that when a band releases a greatest hits album, they add at least one new song to it, to force the long-term fans who already have all the records to buy it anyway. Charmed Life takes this even further, adding an entire limited edition ten-track CD, made up of discarded sweepings from the cutting room floor. Which makes it all the more galling that it's the most consistent set of songs Hannon has released in years, with the first (I'll Take What I Can Get) and last (Those Pesky Kids) being particular highlights. It's an all-killer-no-filler set constructed from actual filler, and if you've got Spotify you can listen to it right here.

Telly: It's always struck me that Brooklyn Nine-Nine is underrated as sitcoms go. Its sit may have been a bit standard - a New York police precinct has wacky adventures - but the rock-solid ensemble cast was always its secret weapon. They came together as a perfectly well-oiled machine from episode one, and stayed that way for seven years. But just after the end of season seven, George Floyd got murdered, and all of a sudden an American police force became a tricky subject to make fluffy jokes about. Two years later, the eighth - and final - season of Brooklyn Nine-Nine has made it on to E4 over here, and we can now see how the writers had to rip up their original business-as-usual plans and come up with a new approach. To be honest, I wasn't sure they could pull it off, and even had the hashtag #DeFunThePolice all ready to go on Twitter. But after a tonally awkward opening episode, where the squad is hit by Covid, Black Lives Matter and a resignation in rapid succession, it quickly settles into an elegant two-pronged approach. One is to directly address the unease with current American policing, with the introduction of John C McGinley as a police union boss representing the morally compromised side of the force: the other is to have entire episodes set completely away from the precinct, sending the characters off on road trips and odd side projects. Somehow, it all still works, and there are a good few laugh-out-loud moments per episode. If they can sustain it for the series finale in a couple of weeks, it'll be quite an achievement.

In the meantime, your Simian Substitute Site for June 2022 is Monkeys, a Peruvian-Japanese fusion restaurant located in Reykjavik. I'm just going to leave that information there for now.

Coming up this month? I'm reluctant to say in case I jinx it. We'll see how it goes, shall we?