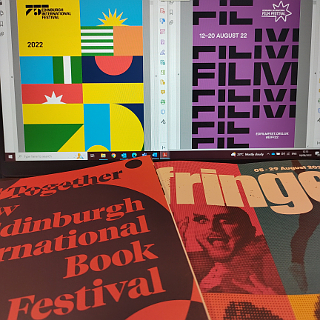 Three years, it's been. Three years since we last did this properly, back in 2019. In 2020, none of us got up to Edinburgh at all, and The Belated Birthday Girl and I spent a whole week watching shows online. In 2021, the two of us went up there for half a week without the rest of the Pals, spent the other half of the week back in London watching more shows online, and at some point during all that we caught Covid. (I know last year I was suggesting we were infected during our LNER train home, but having just seen this episode of No More Jockeys - recorded the day after the live NMJ we saw at Monkey Barrel - I'm now toying with the idea that we caught it off Little Alex Horne. He doesn't look well, does he?)

And now it's 2022. Could we expect something like a normal Edinburgh Festival this year? We've got all the Festivals back and operating in the real world: International, Fringe, Book, and even Film's returned to its natural place in the August line-up. We've got accommodation booked for the week (we originally booked it in 2020, but they've been very understanding). We've got a whole bunch of Spank's Pals joining us again. All we need to do is get the train up to Edinburgh and oh shit.

Very, very attentive readers may remember that there's a precedent for trying to travel to Edinburgh in the middle of a rail strike. It was 1994, back in the days before the Pals regularly joined me on these outings. In the absence of any trains, I recklessly chose to take an overnight coach up from London, arriving in Edinburgh shortly after the sun came up. Within a couple of hours of getting there, and still under the influence of bus lag, I was on stage with Lee and Herring, coming second in a competition where the prize for first place was a car. Maybe this year will be like that?

Well, there's only one way to find out. This year, the brave souls joining me are Alan, The Belated Birthday Girl, Caroline, Charmian, Diane, Grizelda, Lesley, Nick and Pam. Normally, most of us would be heading up to Scotland together on a Saturday morning train: this time, we'll be using a variety of approaches to get there. Will we make it? And if we do, what will we see there?

As ever, I'll be providing daily reviews on here for the week, with possible interjections from Spank's Pals along the way. It's been three years: it'll probably be a learning experience for all of us. Watch this space.