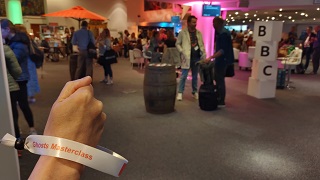 It’s a bonanza for the cocaine dealers of Edinburgh today, because the Television Festival’s back in town. It’s not normally considered as part of the general Festival season, because it’s largely an industry-only affair. But once in a while, they run the odd session that’s open to the general public. The interview they held with Russell T Davies three years ago was enjoyable enough, so when they announced that public places were available for the Ghosts Masterclass we decided to go for it.

The Davies was a bit different, though: that was a standalone event in a theatre, whereas this one is in the Edinburgh International Conference Centre in the middle of all the Tellyfest activity. We have to go to the registration desk and collect wristbands, to distinguish ourselves from the industry lanyard-wearers who are here all weekend. It’s all quite thrilling, even as us scummy wristband people are rounded up and herded into the section they’re referring to as The Fan Zone. (It has to be said, the official delegates are a lot slower getting to their seats.)

According to the moderator at this event, there were two TV shows that brought entire families together around a single screen during the pandemic lockdown: Taskmaster and Ghosts. The latter is pretty much the only all-ages sitcom on British telly right now, and this panel brings together half a dozen of the key players: Matthew Baynton and Jim Howick from the core creative team, actors Kiell Smith-Bynoe and Lolly Adefope, producer Alison Carpenter and BBC head of comedy Jon Petrie. We trace the story from the six main actors being hired to perform in Horrible Histories: when the show finished for them, they decided that they’d all like to keep working together, so they came up with the formats for first Yonderland and then Ghosts. As it’s described here, “you were put together as a group like One Direction, but now you’re all Harry Styles.”

Baynton and Howick obviously get to do the most talking here, but they’re keen to acknowledge the contributions of the other actors who brought ideas that weren’t in the original scripts: Adefope adding unexpected pathos to her role, and Smith-Bynoe finding subtle ways of expressing his irritation at not being able to see the ghosts in his house. They also talk about the importance of making a non-broadcast pilot of a comedy, the rules about what their ghosts can and can’t do, and how cross Smith-Bynoe was when he found out Adefope didn't have to audition. Plus we get a world premiere of the trailer for series 4, no biggie.

Over in the basement of the New Town Theatre, we’re in the smallest room of the week with the smallest audience of the week for the show with the most ominous title of the week: Possibly The Last Chance To See Susan Morrison. Morrison’s been a long-time regular in our Fringegoing, and outside of August we’ve seen her compering at both the Edinburgh and Glasgow Stands. Even though it's nice that this crowd is small enough for her to engage each one of us in conversation during the hour, there really should be more people here: you’re effectively getting three shows in one, and who doesn’t like value for money?

One of Morrison’s side hustles is giving talks on Scottish history for BBC radio: I have fond memories of a Fringe show she did a few years ago as a walking tour around St Andrews Square, telling the true story of how the New Town was built so Edinburghers could get away from the tidal wave of human shit that was flooding the streets of the Old Town. She was visibly holding back from going into too many details on that tour, because there were kids present: for the opening historical section of today’s show, she has no such scruples. Her main focus is on some of the most astonishing things Scotland can claim to be the first country in the world to do: for example, it was the first country in the world to have the word ‘fuck’ appear in print, thanks to a report on a prototype rap battle held in the presence of King James IV. (For those of you wondering about other equivalent words and their uses, Morrison wonders out loud why this poem never gets read out at Burns suppers.)

The ancient history section neatly dovetails into the second part, where Morrison talks about what it was like growing up in Scotland in the sixties, when the rest of the world was becoming more open about sex but Scotland wasn’t so sure. And from there, a discussion about breasts leads to the revelation that hers are currently in landfill somewhere: so part three is where we realise why the show title is what it is. There have been cancer shows on the Fringe before, but this one stands out for its total lack of sentimentality. Morrison has treated everything else that’s happened in her life with bible-black humour, and she’s damned if she’s going to stop now. The whole show is taken at at an extraordinarily fast pace, as if she wants to get these words out while she still can. It may be a cliche to describe something like this as life affirming, but you feel that Morrison is a disgraceful role model for us all. 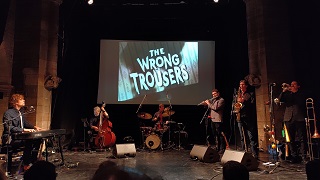 It’s our last full day, so The BBG and I decide to take it a little bit easier in the afternoon. This involves lunch at Mussel Inn followed by a couple of beers at Fierce, the last of which are double digit monsters (Fierce/NZBC’s Total Stuff And Nonsense and Campervan's Lost In Leith Orange Amaretto Milk Stout). These may have contributed to a small lack of focus during the next event.

You’ll remember The Queens Cartoonists as being our main discovery from Mervyn Stutter on Sunday: a six piece band that performs the soundtrack music to cartoons live, except at Stutter they had to do it without the cartoons. In their full show, they accompany a wide range of animations: Hollywood classics like Popeye and Merrie Melodies, sure, but also films past and present from all over the world.

The first surprise is that they’re not playing over totally silent footage: they’ve stripped the original music out of the films but kept the dialogue and sound effects as needed. This makes the synchronisation of music to film even more impressive: the band doesn’t seem to be using a click track, they’re keeping in time with the images by eye. It’s an approach that works well with the obvious fun films, as well as a couple of weirder ones: the underground classic Bambi vs Godzilla, and something strange involving a fish singing Caruso. The one serious film in the set, the slightly arty My Moon, doesn’t quite work for me: however, I’m prepared to accept that’s down to the beers earlier, so I’ve linked to the original here to remind myself what it looks like. That aside, it’s a great idea beautifully executed.

We have dinner at David Bann with a couple of alcohol-free beers just to be on the safe side, and then we’re off to see Sophie Duker in a room at the Pleasance that’s probably just a bit too small for her at this stage in her career. She’s another one of those comedians we’ve only seen in small doses: Frankie Boyle guest slots, online comedy bills, and the inevitable Taskmaster. So again, we’re here to see how she can sustain a full hour.

Pretty well, is the verdict. Her storytelling skills are rock solid, constructing a single narrative out of some key moments in her life: from being made to stay with her grandma in Ghana when she was young, to performing on a cruise to seven hundred women and starting to rethink her sexuality. She’s playing with ideas of race and gender throughout, leading the audience in all sorts of directions before laughing in their faces and taking them somewhere else instead. If some of the lines feel a little too obviously constructed – she’s overly reliant on the rule of three in the first half of the show – then that’s a tendency that could well be ironed out in time for her next one. I’d be keen to see that. 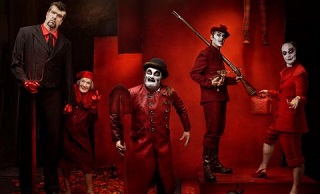 At some point once this is all over, we need to think about how we’ve seen a large number of acts at the Fringe this year who are basically old favourites that we’ve seen several times before. Particularly as every comic we’ve seen this year has finished their act by recommending newer acts we should see. Which is a long way of explaining that we’ve been to see The Tiger Lillies again.

Their show this year is called One Penny Opera, and you can probably see where it’s going from there: it’s the story of The Threepenny Opera, but rearranged with new songs. Well, I say new songs: when you’ve already got something in your back catalogue that goes ‘murder is easy / murder is fun / it’s better than sex / I always come’, then you can see why you’d consider putting that in the mouth of Mack The Knife.

You could argue that The Threepenny Opera is already a fairly cynical piece of work in terms of its attitude to the human condition: and the main thing The Tiger Lillies have done is made it more cynical than it was already. And it’s possible that my tolerance for cynicism has dropped since I first encountered the band 20 or so years ago. But One Penny Opera works well enough as a set of songs, and they’re played in an entertaining enough fashion.

A quick drink in Hoot The Redeemer, and then we wrap our last night in town with a team outing to The Stand Late Club. I don’t like spoiling other people’s punchlines, and a few Friday night beers have made recalling them a bit tricky, so this is going to be more of a sketchy overview than anything else.

Stu Murphy is our compere for the night: he’s a fine host and has a good collection of gags about which famous people he looks like. Abby Wambaugh is the nicest surprise of the night, proclaiming herself non-binary though “I still use the same pronouns as before, I/me/mine.” (Okay, maybe I'll spoil just one punchline.) Tom Mayhew is pleasant enough at the time, but two hours later I can remember nothing of his set. The main reason why we're there is for headliner Alasdair Beckett-King: his usual opening lines about his parentage and his lack of eyebrows are a little too familiar by now, but there's enough new silliness in the rest of his set to top off the night nicely. It's hard to believe that there was a time in the past when people preferred going to Late 'n' Live rather than the Stand's infinitely more civilised alternative.

Here's a useful tip discovered at the end of the day: if you buy a Ridacard that expires on a Saturday, the actual expiry time is 00:01 on that Saturday, so you can’t use it to travel on a night bus late on Friday night. Consider yourselves warned.