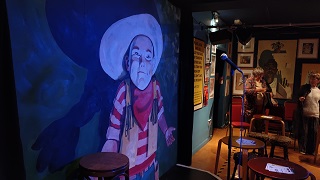 “I’m not going to take that bit out just because you didn’t like it.” That isn’t a line you’d normally expect to hear at a work in progress comedy show, to be honest. What kind of comedian would have that level of contempt for the people who’ve paid to oh yeah Stewart Lee.

Lee’s got two shows at the Fringe this year. One is Snowflake, an hour we saw him working up in London back in January 2020, before circumstances hobbled his plans to take it to Edinburgh and other parts of the UK. Whereas this one, Basic Lee, is him pulling together a new show that currently exists as a pile of A4 sheets that he’s reading from. He says that the audiences for this show have been much more receptive than the ones for the older set. I suspect, though, that he says the exact opposite to the Snowflake crowd, thus taking his usual strategy of dividing the audience to a whole new level.

The blurb suggests that after the intricate structure and elaborate stage sets of his last few shows, this is Lee taking it back to basics, just standing on stage with a microphone telling new jokes. Inevitably, that’s not quite true. For a start, they aren’t all new jokes: we get to hear some of his early standup from 1989, and we also get a reworked bit from the early run of Snowflake (with a brilliantly topical punchline added). But it’s also a deconstruction of the idea of a work in progress show, and ultimately of the form of stand up comedy itself: the writing, the delivery, the sad bit you have to do 40 minutes into a sixty minute show. (“Sinha’s timing that brilliantly this year.”) And in case it wasn’t clear, there are also tons and tons of jokes, in case you assumed this was some sort of postmodern lecture rather that a lot of people laughing a lot more than they normally would at 10am on a Monday morning. (The start time is, of course, a pretty good joke in its own right.).

Speaking of things taking a long time to transfer between London and Edinburgh (like Snowflake), you may have forgotten that one of the hits of the last proper Edinburgh in 2019 was The Shark Is Broken, the play about the on-set fights between the three stars of Jaws, directed by Fringe powerhouse Guy Masterson. It’s been a while since we saw one of his one man shows here: at the moment he's more focussed on directing, as well as humbly selling programmes outside theatres putting on his shows.

9 Circles, written by Bill Cabin, is loosely inspired by a true story. Daniel Reeves (Joshua Collins) is an American soldier who we first see receiving an honourable discharge at the height of the Iraq war. Some time later, it emerges that he was part of a group of soldiers who took part in atrocities while on duty. Reeves doesn’t see the problem: it was a war, things happen. But as more details emerge, it becomes apparent this could be a capital case.

In the middle of a day where we're largely seeing light fluffy stuff, this is a cold shower of a show and no mistake: as Nick points out, asking questions like "did you enjoy that?" seem wildly inappropriate. Although in the early scenes, before we’ve got a real handle on what’s going on, there’s a gallows wit running through the dialogue: Reeves assesses his situation with brutal cynicism, and quickly proves himself smarter than we first thought. That cynicism withers away as things get more grave, but crucially we never lose interest in what's going to happen to him, even if we might lose sympathy for the character. With the aid of a hard-working support cast of three and a simple but effective set, Collins gives an incredibly powerful performance. There are a lot of people, us included, who will jump onto a Guy Masterson production just because it's him, and plays like this prove us right. 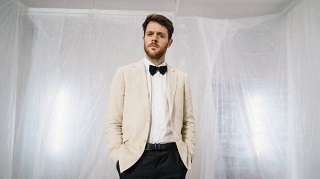 The BBG and I have lunch in a place that's new to us – Hope, serving Japanese omurice, which is basically rice wrapped in an omelette with the option of extra chips on the side for that double carb boost we all need three days into a festival - and then we're back to the funny stuff. Over the course of the pandemic, we were as in need of funny stuff as everyone, and ended up obtaining it from two major sources. One of those was Taskmaster, which we're still enjoying to this day. But with only twenty episodes or so being made every year, what are you supposed to do for the other 32 weeks? One possible answer to that question is Taskmaster New Zealand. It has the same format as the UK version (including identical sets and music), but it’s the little differences, like John Travolta said once. The relationship between Taskmaster Jeremy Wells and assistant Paul Williams isn’t exactly the same as that between Greg Davies and Alex Horne: it's its own thing, and a joy to observe as it develops over the course of three seasons (so far).

It is, of course, impossible to watch Taskmaster NZ over here. But right now, New Zealand’s own Alex Horne substitute Paul Williams has his own one man show in Edinburgh. Like Horne, he’s not averse to mixing comedy and music – although the one album of his you'll find on Spotify, Surf Music, has a whole stash of bewilderingly pretty songs that don't fit the template of what you'd expect from an album by a comedian. As a result, we have no real idea what to expect.

What we get from In The Moonlight is a slowly paced bit of storytelling, broken up with musical interludes and odd digressions along the way, and accompanied by some pretty video backdrops. Williams' standup persona isn’t quite the nervous wreck we see on TV, but his low key silliness and determination to take the most ridiculous route round to a joke makes for a fun hour. If his music interests you more than the comedy, he’s just announced a greatest hits gig at The Flick at 1am this Saturday morning. (Sorry, we’re busy then.)

The second comedy thing that got us through the pandemic was the regular live streamed show from the Stand every Saturday night: not only did it give us a way of separating out the weekend from the rest of the week, it also introduced us to a whole tier of Edinburgh-based comedians we hadn’t heard of before. Obviously the biggest name from that year of streaming is compere Mark Nelson, and we’ll get back to him. But for now let’s focus on Liam Withnail, who’s got a show this year at Monkey Barrel Comedy. And we need to talk about Monkey Barrel, because they’ve expanded quite a bit since last year. It was confusing enough when they had two venues on opposite sides of Blair Street, but now they’ve also got a pair of small rooms labeled Carnivores in the upper level of a steak restaurant further down the road, which Withnail is happy enough to slag off in his act. “I've been here two weeks now and I haven’t seen them serve a single steak.”

Compared with the material we saw him do on live streams during the pandemic, the new show Hot Sauce is, frankly, a bit rude: he insists he tried to write a show about the sense of community that arose during the lockdowns, but once he’d made an appalling observation about the garlic and herb sauce that comes with Domino’s pizzas it was all downhill from there. However, his personal charm – along with a healthy dose of self-analysis – gets the audience through the, um, stickier bits of the hour, which means that when he messes up a callback towards the end everyone still forgives him. 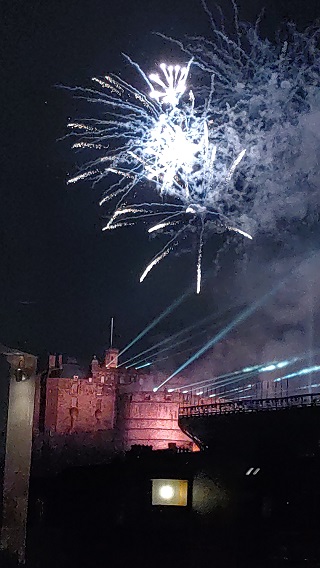 Dinner at The Outsider, which we would have done twelve months ago if they hadn’t set fire to the Elephant House for the insurance, is as smashing as ever: as a bonus, our window seat gives us an unexpectedly great angle on the lightshow and fireworks at the Tattoo. (Never paid for it in three decades of coming here, still enjoy it anyway.)

And we finish off the day with Luke Wright's Late Night Dance Floor Fillers (Poems). We last saw Wright in person in 2008, when The BBG was a little offended by his joint show Who Writes This Crap? because he was rude about Innocent smoothies. A couple of years later, Innocent sold out to Coca-Cola, and she realised he was right.

What’s changed since then? Well, Wright is now 40 years old and married with two children, but is still making jokes about having a child-like ‘milk face’, which he hopes will one day fall off to reveal a more grown up one. In the meantime, he’s writing a huge variety of poems: funny ones that show he’s still got a keen eye for observation, sharp technical exercises that work brilliantly (he reads one poem where the only vowel used is ‘o’, then repeats the trick just using ‘u’), and the odd serious one that beings the audience up short, which amuses him enormously.

Wright’s been doing this for over two decades now and knows how to structure a show, so the hour just flies by. And he’s the second person today to use the phrase ‘does not conform with the values of the Pleasance’ as a punchline, though he’s the only one so far with the cojones to say it while performing at the Pleasance.

(Yeah, there's too much white space at the bottom here, but I like the picture, so tough.)