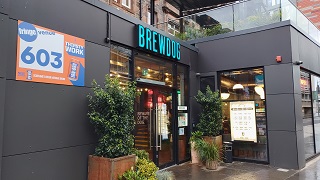 Planes, trains and automobiles – that’s how Spank’s Pals are getting to Edinburgh this year in the wake of the rail strike. Some of them have flown up to Glasgow and are making the hop from there to here by bus: some have got trains before the strike: some are getting trains after the strike finishes and arriving late: one person’s driving.

And then there are three of us taking the overnight coach up from London, like I didn’t learn my lesson back in 1994. Pam left last night on the 10pm Megabus: The BBG and I made the tactical decision to get an even later one at 11pm, to minimise the amount of time spent wandering around Edinburgh in a daze this morning. It turns out to be a pretty good idea, because I don’t get very much sleep on the coach. I'd tried to prepare myself psychologically by pretending I was on an overnight long-haul flight, because I’ve done quite a few of those over the years and managed to get a few hours kip in a non-reclining seat. It turns out that the inside of a Megabus is louder than the inside of a 747. Who knew?

In all other aspects - apart from, perhaps, the coach toilet setting out on its nine-hour journey with no soap and one sheet of toilet paper - it’s a flawless journey for our fifteen quid fare, and gets us into Edinburgh fifteen minutes ahead of schedule at 8am. We cut through Waverley train station to pick up a newspaper, nod politely at the picket line starting to form at the exit, and head towards our fourth new BrewDog bar of the week so we can grab breakfast.

Twelve months ago we were on East Market Street taking pictures of an old Edinburgh schoolhouse: now we’re back and it’s become DogHouse Edinburgh, the latest in BrewDog's collection of fancy hotels. We stayed in the Manchester one last year, and that was fine for a fun single night: but the prices of the rooms are a bit high at the best of times, and could only get worse in Edinburgh during the festival, so this won’t be a residential visit. Instead, we grab a couple of their special breakfasts laid on specifically for Fringe visitors: each one’s a plate full of Scottish stereotypes, with haggis, black pudding and square sausage alongside all the regular components. The lack of a tattie scone is quietly noted. It’s quiet at this time of the morning, but the staff are as cheerful as ever, with our waitress impressed by the Waterloo stamp on our Beer Visas and even more by The BBG’s collection of photos from the launch night.

We only have time to have breakfast and abuse their toilet facilities like only people who’ve just come off a nine hour bus journey could. We’ll be back later. In the meantime, our plan to get through a morning of bus lag now enters phase 2: the Possible Cheeky Nap. We can’t check into our flats till at least 3pm, so we need to find something to do for five hours. So we find a film that’s showing as part of the Film Festival and book for that – and as it’s not one we’re especially desperate to see, if we end up nodding off in the seats, that could actually be a quite neat place to catch up on our sleep. It’s a plan that’s scuppered by Your Name being absolutely brilliant and keeping us awake for the whole time.

We’re only just making it into the Film Festival by the skin of our teeth – today’s its final day. But there have been three late additions to the programme because Kogonada, the director of tonight’s Closing Gala, has been given these slots to select some of his favourite films: and this 2016 anime is one of them. To be fair, given the plot, it’d be a good one to fall asleep in. Mitsuha is a young girl in rural Japan, neglected by her politician father and trapped in the family business of shrine maintenance. Taki is a young boy in Tokyo, trying to hold down a job in a restaurant and complete his schooling at the same time. They don’t know each other, but each one keeps having dreams in which they’re the other one. And that’s before it gets complicated.

This is my favourite type of movie romance: one where the protagonists are battling with utterly impossible emotions, but still part of an emotional story rather than a mere narrative puzzle. The body swap aspect has a fair bit of comedy attached: there's the obvious fun of Taki examining his newly-acquired boobs, while The BBG seems laughing louder than anyone else in the room at the gags about the way gender works in the Japanese language. But the story tugs at you in deeper ways too: it’s visually stunning (although some of the CGI-intensive sequences don’t quite mesh with the more organic look of the rest), and its moments of high emotion feel properly earned rather than manipulated. Good choice, Kogonada: shame you couldn’t get out of bed for 10am to introduce it yourself. After all, we managed it. 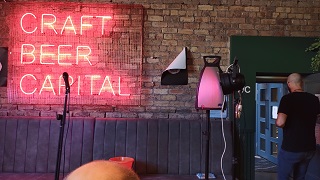 We get back to DogHouse in time for noon, and our first proper drinks of the festival (BrewDog’s 90 Day Bock and Stewart’s Cranachan), which gives us a bit of time to investigate the place more closely. The obvious comparison point is the Manchester DogHouse, but this one’s a bit smaller: as The BBG points out, Manchester is a bar with an 18 room hotel built on top, while this is a 20 room hotel with a bar. A very nice bar, too: sure, it was quiet when we first came in at 8.15am, but to be frank nobody in this town is awake at 8.15 during Festival, and by the time we left at 9.30 all the tables were full. By the time we get to this lunchtime session the place is operating at proper lunchtime levels. 30 taps of beer available, and a delightfully overstuffed fridge: it’s all good. Maybe it'd be nice to come back again some time and check out the hotel rooms, but not on our current budget.

As you may have noticed from the picture at the top of the page, DogHouse also has an upstairs bar that's currently doubling as a Fringe venue. This leads to the lovely situation where Josh Elton tries to flier us at our table for his afternoon show, and we can tell him that it was always our plan to see him as soon as wed finished our pints.

His show Early Doors is basically a double-header, with a different opening act each day – today it’s Gary Sansome, doing odd bits from his show Bald Man Sings Rhianna, and bantering with the fellow Glaswegians in the house. Curiously, both comics have material that requires them to talk about how long they've been in the stand-up biz, and in terms of experience Sansome is the senior of the pair. But Elton is very much the headliner here. As The BBG notes, he’s a natural compere, getting the audience geed up quickly, and setting the ground rules of how to behave in a small room like this one. He’s complaining how thanks to poor flyering, he’s recently been performing to audiences of pensioners, who have different expectations – “yeah, I’ve got twenty minutes of material on shillings.”

It’s a nicely constructed set: it starts off feeling like random ramblings, but a structure reveals itself very slowly, without it taking precedence over the jokes. And as it’s a free fringe gig, he takes advantage of the venue to make an intriguing offer – we can either put cash in his bucket at the end, or use our cards to donate directly to his tab behind the bar. He’s a good discovery so early in our week here, and hopefully we’ll see more of him.

We pick up a couple of Ridacards from near Waverley, because our digs this year are a little further out from the centre of town than usual, and a week-long bus and tram pass would seem be useful. We use them to head out to our student flats, meet up with a subset of the Pals, check in, and swap our travel experiences over a coffee. Then The BBG and I head back out to the Vue OmniCentre (where we saw Your Name earlier) for what really needs to be our final event of the day, before the bus lag does us in altogether. 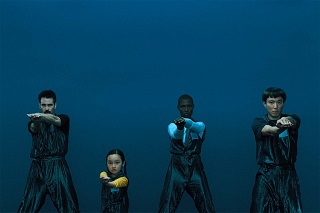 Before they announced the extra screening of Your Name, we assumed that the only film we’d have time to see this Festival would be its very last one, the Closing Gala of After Yang by the aforementioned Kogonada. Initially best known as one of those people who makes film analysis videos for the internet, a few years ago he ventured into features with Columbus, a cross-generational relationship story bulked out with shedloads of architecture porn. His follow-up is the story of a typical family: dad Jake (Colin Farrell), mum Kyra (Jodie Turner-Smith), adopted Chinese daughter Mika (Malea Emma Tjandrawidjaja), and adopted robot son Yang (Justin H Min). When Yang suddenly breaks down, he sparks off a family crisis: Jake attempts to solve it by delving through Yang’s memories as well as his own, and gradually learns the risks of buying tech second-hand.

On our way to Chez Jules for a late dinner after the film – because some things will never let you down – I remember all the Saturday night events we rejected to leave space for the Film Festival Closing Gala before we knew what it was: Kae Tempest at Leith Theatre and PJ Harvey at the Book Festival spring to mind. Both of those would have been better than this, I think. After Yang is a collection of ideas hurled onto the screen with no attempt at developing them at all. Sure, it looks pretty - the opening credits are uncharacteristically delightful, and the way in which Yang’s memories are visualised is impressive - but it’s all curiously hollow. It feels like it’s aiming for the same affectless, slightly peculiar level of drama as the films Farrell made with Yorgos Lanthimos - The Lobster and The Killing Of A Sacred Deer - but it misses by a mile.

To add insult to injury, we find out on Twitter afterwards that Kogonada and Min were posing on the red carpet this evening, and then ran away without actually getting in front of the audience who'd paid to see their film, therefore draining any sense of occasion out of the festival’s grand finale. Still, the steak afterwards was nice.