Reviewed today: Jarvis Cocker, Lauren Pattison: It Is What It Is, Thank You Edinburgh. 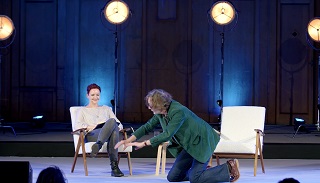 It’s our final day, and we need to address the elephant shite in the room. Edinburgh is in the middle of a bin strike, and for the whole week it’s been impossible to ignore the rising tide of rubbish in the streets, like we’re living in the pre-credits sequence of a documentary about punk rock. It adds a bit of an edge to the traditional pre-departure clearout of our flats: the supplied bins are all full, so they’ve had to lay on a skip instead. That little glitch aside, it’s been another good week of student accommodation courtesy of Napier University: it’s our first year of having en suite rooms rather than a shared bathroom, and I think it’s something we could get used to very quickly.

As the Pals disperse for one more day’s worth of activity before reconvening later for the train home, The BBG and I realise that we haven’t really made any plans for the first part of the morning. So we improvise. Not in the sense of asking passers-by to choose something you’d find in a kitchen, and a drama style: more grabbing our second breakfast of the day in the Filmhouse cafe bar (morning roll and a coffee for under a fiver between 10am and noon, absolute bargain), plugging two sets of headphones into my phone and watching a recording of Jarvis Cocker’s book festival talk from over a week ago. (FYI: quite a few of the Book Festival events are now available to watch on demand on a pay-what-you-can basis. See if any of them interest you.)

Cocker is here off the back of his new book Good Pop Bad Pop, which regular readers will know we’ve just experienced in audiobook form. A sort of autobiography constructed from an inventory of items from his life stored in an old loft, it’s the sort of book that needs pictures so you can see the objects he's talking about. Shockingly, he announces at the start that he normally brings a bin bag full of items along with him to events like these, but he's lost it. He has to make do with a set of slides and a laser pointer instead: sadly, they don’t find a way to make the laser pointer work for the online audience.

You’ve probably seen Jarvis Cocker dance at one time or another. This is relevant, because what makes this a delightful hour is his insistence on physically acting out key moments from the book. Whether it’s climbing into his tiny loft to retrieve stuff, or preparing to fall out of an upstairs window, he’s out of his seat and miming the actions, arms and legs going off in all possible directions. As we already know the contents of the book, this visual component is the most interesting aspect: there’s not much talked about here that isn’t already in the text, apart from a hint that a second volume might be on the way. But time spent with Jarvis, even virtually, is never time wasted. 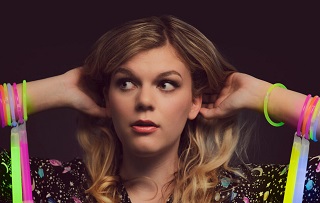 “Thanks a lot for making this your first show of the day,” says Lauren Pattison at 12:35. “If this isn’t your first show, calm the fuck down.” Bit late for that, Lauren. Actually, she should have been on stage at 12:30, but she had to go to the Not Perrier Awards bash at noon to see if she’d won or not, and is now worried that people may have misinterpreted her running out of the room as soon as Sam Campbell was announced as the winner. (For those of you who've been keeping score during the week, both Pattison and Campbell have been appearing at Monkey Barrel, which has to be considered the Fringe venue of 2022.)

Pattison was one of our early pandemic discoveries, as we saw her appear on a couple of online comedy bills and were keen to see her do a full hour. It turns out that around the time we saw those online shows, the first lockdown was turning everything in her life upside down: she split with her boyfriend, moved from London to Newcastle to stay with her parents, and had to take a job on the tills at Morrison’s to compensate for all of her gigs being cancelled.

At one point in this set, Pattison's talking to someone about what sort of comic she is, and suggests "I'm more of a storyteller than anything else." She's a bloody good one, too. Her story’s told at high speed, a possible consequence of the anxiety that she suffers from, which has been ramped up to new levels in the last two years. It gives her performance a compelling degree of vulnerability, and gets an audience engaged with the highs and lows of what she's been through. Having said that, she carefully resists the temptation to coast on that, and every so often we get a glimpse of the core of steel that's got her through those lows. And part of that core is something we're seeing too little of on the Fringe at the moment: this is explicitly the story of a working-class girl making her way in the middle-class comedy world, and refusing to take any shit from anyone because of her accent or her day job. 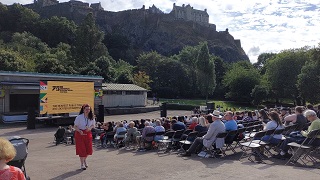 Lunch at The Banging Hat, and then off to Princes Street Gardens for our big finish. Back on Thursday, we saw the opening concert in a short residency by the Philadelphia Orchestra: this afternoon, they’re wrapping it up with a free show at the Playhouse, Thank You Edinburgh, as a present to the city from the Festival in its 75th year. All the tickets for that concert went instantly, but there’s an overflow livestream being shown on a big screen in the Gardens, so we grab a couple of seats and give it a look. Happily, the artists involved are keen to make the outdoor audience feel as part of the event as the indoor audience, and say hello to us every so often. Delightfully, we all say hello back.

We only get to see two thirds of the concert as we’ve got a train to catch, but what we see is as impressive as the orchestra’s performance of Beethoven’s Fifth a couple of days ago. It’s a concert aimed at a general audience (as indicated by conductor Yannick Nézet-Séguin performing in a monochrome Hawaiian shirt), so it’s largely made up of popular favourites. Still, there are a couple of little surprises in there: the biggest one is a 2020 commission, Seven O’Clock Shout by Valerie Coleman, which musically depicts the American equivalent of our 8pm potbanging for the NHS. (The video of the piece I've linked to there - filmed in the summer of 2020 - just might be the best example of that sort of thing I've ever seen.)

We also get a run of numbers featuring soprano Angel Blue, from O Mio Babbino Caro to Over The Rainbow., and a few hummable old favourites like Rossini's overture to The Thieving Magpie. It's all played with magnificent precision and verve, but we can't afford to hang around till the end. As we leave, they’re launching into Dvořák’s Carnival Overture, which it turns out was the unannounced piece they used to open Thursday’s concert. So that’s one mystery solved.

We get to the station, meet up with the rest of Spank's Pals on the train, and nothing untoward happens from that point onwards. I know, I'm as surprised as you - it's a massively uneventful journey on an only half-filled train that gets into London precisely on schedule. Which means that aside from the usual postscript that should be appearing here shortly, that's the end of our first proper Edinburgh Diary in three years.

I think that like I suspected before it started, the 2022 Festival was a learning process: we couldn't really be expected to get straight back to normal again. For my part, I suspect The BBG and I did a lot more comedy than usual because online stand-up was one of the things that got us through the lockdowns, and it introduced us to lots of people who we were keen to see on a stage at the first opportunity. As such, I think Mark Nelson, Lauren Pattison and Liam Withnail were among the highlights this year: but if I had to pick one non-comedy event that blew my mind, it'd have to be the low-key multimedia thrills of D Ý R A. There wasn't much straight theatre that grabbed our attention this year: maybe next time.

We still haven't decided yet if 2023 will be that next time, or if it'll be one of our years off. Either way, we'll be back. We have to be, as I had a great idea for a new Fringe show on Friday morning. Sitting in the Wee Coffee Bar and looking out the window at the EICC over the road, the main thing I could see was a poster for Shit-Faced Shakespeare, along with a couple of adverts for various circus shows. And it came to me in a flash: Shit-Faced Circus. A full circus performance, but one of the performers is blind drunk. It could be the ringmaster: it could be one of the trapeze artists: it could be the lion-tamer: hell, it could be the lion, I'm not fussy. If you'll excuse me, I think I should sign off now and make a few calls to BrewDog about sponsorship. Being a monkey, and all.

(But before I sign off, I'll point you in the direction of the Postscript.)