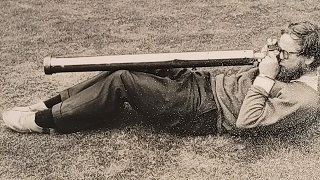 One of the big controversies of this year’s Fringe has been the absence of a Fringe app. Performers have been complaining about it as much as punters, maybe even more so, because it makes it much more difficult for shows with no promotion budget to make themselves known to people just wanting to see something close to where they are now. We hit a good example of this this morning: on a bus to the Dovecot Studios to catch an exhibition there, we realise that we won’t get there in time to give it the 90 minutes of attention they recommend. Using a combination of the paper Fringe programme and Google Maps, I manage to find an alternative smaller free exhibition a bit further along the same bus route: but I’ve been doing this for over three decades, and on this occasion have a bit of luck on my side. A Fringe app would have made that decision a lot easier: hopefully they’ll be able to sort it out for next year. After all, Peter Buckley Hill is in his seventies and has no money, and he’s been able to supply a Free Fringe app.

Robert Blomfield: Student Of Light isn’t part of the PBH Free Fringe, it’s just a university event that costs the same amount. Contrary to the title, Blomfield was a student of medicine rather than light, who studied for eight years at Edinburgh University in the late fifties and early sixties. The course normally takes six years to complete, but part way through it he got itchy feet and went off travelling in Turkey for a bit, which gives you a feel for the man’s personality. In a nicely assembled intro film built around interviews with his children, it’s suggested that Blomfield was interested in people more than anything else, an interest that lay behind his choice of study as well as his hobby of street photography, which is where we come in.

When Blomfield died in 2020, his family were in the middle of a long term project to preserve his huge collection of photos and slides. Eventually his old university agreed to take on the job, and this exhibition in the university library is the first stage in their plan. It collects a few dozen photos that he took while walking round the streets of Edinburgh in the 50s and 60s. His eye for composition and use of black and white is stunning (the few colour photos we see somehow feel more experimental and less realistic). It’s a perfect time capsule of the period both in terms of the people (he captures their styles beautifully) and architecture (surprising to see how some of the look of Edinburgh hasn’t changed much in over half a century).

It’s Sunday! It’s one o’clock or thereabouts! So as surely as day follows night, it’s time for Mervyn Stutter’s Pick Of The Fringe, now in its 29th year. Half a dozen of our crew are there for it, including Nick and Charmian, who we see for the first time since they arrived yesterday afternoon. (Meanwhile, two more - Diane and Grizelda - are on their way by train, having chosen to avoid the strike by travelling after it.) Merv is now in his 70s and appears to be in fine form, even if his voice is cracking (along with his hip and his brain, if this year’s song is anything to go by).

The format remains unchanged: seven acts from all over the Fringe perform five minutes or so of their shows, and Merv has a sympathetic chat with them and lets them tell you how you can see the rest of what they do. It’s a different show every day, and your enjoyment is entirely down to how good the acts are on the day you see it. Today, I think, it’s a really good one. Impressionist Jess Robinson opens with a show-stopping bit of business comparing the three versions of A Star Is Born, in which she switches rapidly between Streisand, Garland and Gaga, sometimes within a single note. Anthony DeVito does the first few minutes of a show which straddles the border between standup and dramatic monologue, stopping just before the key selling point – he’s telling the true story of what it’s like to have a father in the Mafia. Sugar, on the other hand, is a more traditional monologue, and we get a section where writer/performer Mabel Thomas tells a story from when she was six.

Masterclass is probably the least immediate piece shown here, an extended sketch depicting an interview with a playwright that takes many surreal turns: but even this gets in some sharp parodies of the sort of flowery nonsense people spout when describing theatre, particularly given that Merv has already read out some examples of the real thing when introducing the acts. Heroes is a interesting-looking and well-acted play about young people trying to find role models, but it’s possible this may have been the wrong audience to show it to, especially when a fit of giggles breaks out as one of the actors starts talking about knife crime. Scott Bennett is the show’s one foray into traditional stand-up – he’s very slick and funny, though Merv is more interested in Bennett's side hustle of writing gags for the likes of Michael McIntyre and John Bishop and so on. Finally we have The Queens Cartoonists, a frenetic six piece band playing cartoon soundtrack music from Loony Tunes to Aardman. As they explain, in their own show they actually have the cartoons showing in the background and synchronised to the music, but in a clip show like Merv’s they can only play the tunes. As irresistible teases go, that one’s a beauty, and within an hour we’ve bought our own tickets to see them later in the week. Another success for Stutter! 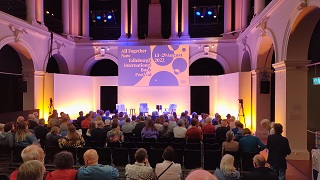 People sometimes ask how we keep track of all the shows we see at this festival. And, well, sometimes we don’t. Like now, for example – we’ve got our first event at the Book Festival, but we realise as we go in that we have no idea who we’re seeing or why we booked to see them in the first place. We could just look in the programme, sure, but we decide to embrace the mystery and see how far into the event we get before we find out what’s going on. It’s quite fun, you should try it some time.

It turns out to be a discussion with Steve Brusatte and Thomas Halliday, two paleontologists. (We worked out before the lights went down that our book festival choices are generally based around sci/tech, showbiz or politics, so that tracks.) The two guests have quite different approaches. Halliday is the model of a quiet young Scottish academic, writing about what it was like here 550 million years ago. The extract from his book Otherlands – a deep history of our planet, told in reverse chronological order to stop the reader thinking of human life as the key focus – is a beautifully written description of a period so far back in time that many of the stars we take for granted in the sky today weren’t around. Brusatte is American, a professor at the university here (he wishes out loud that his student lectures were as well attended as this talk), and up until recently was a dinosaur specialist. Once he’d covered their lifecycle all the way up to extinction, he was looking for what to do next – hence his new book The Rise And Reign Of The Mammals. He’s got an advantage over Halliday in that he can include humans in his story, like the slaves who were the first people to discover fossilised mammal teeth.

The differing personalities and epic timescales make for a wildly entertaining hour, as shown by the range of audience questions asked at the end. A ten year old watching online wants to know how to become a paleontologist, while a man in the audience asks if the Webb telescope could allow us to see the events they’ve just described happening on other planets. Bonus points to whoever it was at the festival who chose I Am A Paleontologist by They Might Be Giants as the exit music. 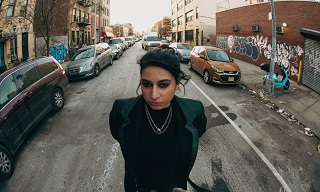 We haven’t been up to Leith in years, not since that play set in an Indian restaurant where The BBG was told that she looked like the young Madame Mao. In the future it should be a lot easier to get up there once the tram line’s been extended out there: but right now, a large chunk of Leith Walk's being dug up to lay down the tracks, so it takes even longer than usual. Still, we eventually make it there, and celebrate with a quick beer at Moonwake brewery tap (The BBG’s brewery project for 2022 is currently proving ridiculously successful) and dinner at Fishers. Then we move out of the more gentrified bit of Leith and over to the delightfully-tatty-but-soon-to-be-restored-by-the-former-manager-of-The-Human-League Leith Theatre, home of the International festival’s contemporary music concerts this year. (It’s odd how the Fringe has given up on presenting gigs in recent years, or is it just that Internati0nal does them better?)

Tonight’s show is by Arooj Aftab, a Grammy-award-winning Pakistani singer operating out of New York. Her opening gambit with the audience, after a delicately pretty first song, is to complain that her Uber Eats order from a nearby Pakistani restaurant hasn't arrived yet. It’s a neat trick, trading on a faintly exotic image but undercutting it at every opportunity. "People who don’t speak Urdu think these are all religious songs, but they’re just about getting drunk and failing in love." The air of mystery is also enhanced by her decision to perform with a huge amount of smoke and heavy backlighting, meaning that for large parts of the show you’re not entirely certain if she’s still on stage, or has nipped off to scoff her delivery from Uber.

One thing this does, though, is force you to concentrate on the music, which is rather lovely. Stripped down to just a guitar, a bass, a subtle electronic tambourine and her voice, at the start it sounds like standard Western sensitive singer-songwriter stuff, with maybe a few quirks in the scales being used. But as the show progresses, and the songs start opening out, there’s a real hypnotic power in there. By her final number, the songs feel like they’re going on for absolutely ages without the repetition ever becoming a problem – in fact, it’s disappointing when they stop. Hope she got her dinner in the end, she deserves it.