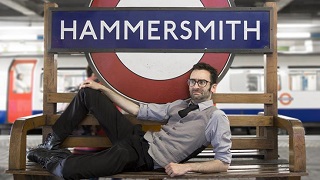 Two interesting facts I’ve discovered in the last 24 hours. 1: 50% of the Fringe comedy reviews in The Guardian this year have been for shows at the Pleasance Courtyard. 2: 60% of the nominees for what many of us still call the Perrier award are shows at Monkey Barrel. Comedy at the Fringe is changing, and the papers don’t seem to have caught up yet.

We have, though, so our first show of the day involves a return to the Hivey bits of Monkey Barrel, slightly marred by us messing up after last night’s late finish and having to make the final leg of our journey by taxi to get there on time. (It's obviously been a while since I last used a taxi here: nobody told me the doors open automatically now.) It’s a good job we get there promptly, because the fun at MC Hammersmith’s show starts literally as they open the doors, and he improvises a freestyle rap welcoming each audience member individually as they come in. (If you fancy a bit of attention, bring in a cup of coffee from outside and he’ll judge you based on the cup.)

MC Hammersmith is another one of our lockdown discoveries, thanks to his appearances on the Stand’s Saturday night livesteamed shows. It was obvious then that when your schtick is improvising raps based around audience suggestions, you’re not going to be at your best working with socially distanced or remote audiences: it’s the sort of comedy that really needs a crowded room to fly.

Well, today we get a crowded room, and Hammersmith flies. He has a series of standard formats he works within – ten random words shouted out by the audience, a selection of objects taken from their pockets, or the story of a couple’s first date – and in each case immediately launches into an impromptu rap on the subject, with rhythm and rhymes all coming together with no apparent effort (except when someone suggests ‘antidisestablishmentarianism’ as one of the words). He crams plenty of jokes in there as well, not merely coasting on the comedy value of a nerdy white middle-class rapper who says the m-word too many times for his own good.

My own contribution to the proceedings comes during a general audience Q&A section, where every answer he gives has to be in the format of an eight bar rap: I ask him for Fringe recommendations, and he comes up with three and caps them with a punchline. As I said, it’s the collaboration between Hammersmith and the people in the room that makes it so joyous. He’s taking his show to various rooms across the UK in the autumn: check him out, motherfuckers. 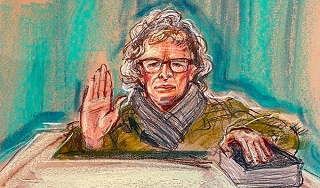 Lunch at BrewDog Cowgate – the first of the BrewDog bars we ever visited, and currently home to an excellent haggis pizza that they’re offering to the tourists during August – and then it’s time for our regular appointment with Simon Munnery. Last time I was here for a full Festival week, I made a fuss about all the acts I saw at my first Edinburgh in 1989, who were still performing in 2019. Munnery is the only one of them I’m seeing again in 2022, so I guess he can be counted as one of the fixed points in my schedule.

Every Munnery show usually contains one utterly perfect joke, and this year’s – his opinion on Roe vs Wade – is a magnificently layered creation, which you can hear running around the room unpacking itself in people’s heads at different speeds. Too good for Dave’s list of Best Fringe Jokes, I expect. Aside from the usual fragments that disturb the structure – surrealist prop work, old Clash songs, a slanderous poem about Vladimir Putin – this year’s show, Trials And Tribulations, is built loosely around the two occasions when he’s found himself in court. Nothing much really happens in these stories, but as ever it’s all in the telling, hovering permanently on the brink of chaos but never quite crossing over. Munnery continues to be his own genre, and that's why we all keep coming back to him.

Our last Book Festival event of the year features local resident Ian Rankin – well, maybe features is the wrong word, as he’s only here as an interviewer. He’s a pretty good one though, slyly announcing that this event is sponsored by Scottish Mortgage Investment Trust, and that he’s sure they’re a legitimate outfit. This is by comparison with the organisations covered by Oliver Bullough in his book Butler To The World.

Bullough claims that Tintin was his role model as a boy journalist, and he did some of his earliest work after the downfall of the Soviet Union, thinking he’d be able to say to his grandchildren "of course, I was in Russia back in the days before it became Denmark..." But as corruption ran riot in the wake of Putin’s rise to power, he realised that wasn’t going to happen. As he investigated that corruption, he found the same theme occurring over and over again: oligarchs who were persona non grata in their own country could relocate to the UK and be welcomed with open arms, along with their money. The British used to be the oligarchs in this scenario: now we’re the butlers catering to their every whim.

Rankin – who wrote a Rebus novel centered around the sort of Scottish shell companies that enable these shenanigans – does a good job of prodding Bullough along as he explains the results of this influx of dodgy cash (including a regular bus tour he organises in London that takes you round several oligarchs’ houses). It’s an excellent entry level discussion, and you can watch it online for the next few weeks on a pay-what-you-can basis. But it surprises me that it’s not until the audience Q&A that we discover the extent of Bullough’s butler metaphor: his book has several references to Jeeves and Wooster strung through it. At the end of one book, Wooster wonders why Jeeves, with all his skills and abilities, isn’t prime minister. As Bullough points out, Jeeves may be the most capable person, but he’s only doing this for the money. And that’s why Bertie Wooster is prime minister instead. 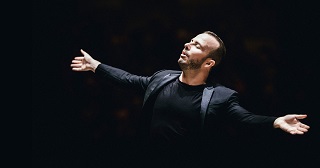 As Dr Phil Hammond would doubtless tell you, we’re still in the middle of a pandemic, and it’s still going to cause problems in a festival as big as this one. We’ve already had a cancellation from Norman Scott, but this next one strikes me as an even bigger disruption. Tonight was meant to see the first night of a short residency by The Philadelphia Orchestra, commencing with a collaboration with the Edinburgh Festival Chorus on Beethoven‘s Ninth Symphony. Except a couple of weeks ago, we were suddenly told that the Chorus wouldn’t be performing, owing to some sort of mismatch between the Covid protocols of the Festival and the orchestra. Nobody’s said it out loud, but you can only assume that the Philadelphia Orchestra didn’t want a large group of Scottish singers hurling potentially infectious flob in their direction to the tune of Ode To Joy.

So, a change of plan: instead of Beethoven’s Ninth, we get Beethoven’s Fifth Symphony, without any prospect of the 4/9ths refund you’d expect in these circumstances. To be fair, the programme is padded out a bit: it starts with an unannounced but massively upbeat curtain raiser that conductor Yannick Nézet-Séguin asks us to think of as a front-loaded encore. It’s a good introduction to his hugely expressive conducting style – frenetic as hell for the opener, flowing and lush for the official first piece, Rachmaninov’s Isle Of The Dead.

As for the Fifth, we all know how it goes. (My original ticket for the Ninth promised it would be ‘sung in German with English supertitles’: sadly, the dot matrix board above the stage doesn’t read DER DER DER DERRRRR at the start of the Fifth.) I studied at least part of it at school, but don’t believe I’ve ever seen it performed live before, so once I get over the relapsed O Level trauma it’s a joy to watch. Another proper encore (A Prayer For Ukraine) wraps up our first encounter with the Philadelphia Orchestra. There may be a second.

And to finish off, it’s nice to see some standup that proves yesterday’s disappointment with Frankie Boyle was an outlier. Although Jamali Maddix is a bit concerned that appearing on TV has done weird things to his audience, with some people who know him from hard-hitting comic documentaries like Hate Thy Neighbour, and others who’ve recently picked up on him from Taskmaster and are about to be disappointed. “Why, he isn’t whimsical at all!” We kind of fall into that second category, although we also know him from Dave’s feeble Taskmaster substitute Outsiders, and as such can only ever pronounce his name in a Jessica Knappett accent as ‘Ja-MAH-leh!’

Anyway, we aren’t expecting whimsy, so we’re happy with what we get, which is Maddix spitballing slightly worrying ideas in a slightly offhand way. Early on he gets nostalgic about terrorism and wonders why we haven’t had any since the pandemic started, to give you a flavour. He looks at race, young people and his own mental health with a similar degree of scrutiny.

It's not till much later that I remember something: my earliest encounters with Maddix were as a guest on Brendon Burns' Dumb White Guy podcast. The two comics have a very similar approach, in that when they ask the audience questions in their sets it's not just to break up the monologue, it's because they're genuinely interested in what other people have to say. The openness that Maddix shows here when discussing tricky topics like race and addiction is incredibly reminiscent of the way Burns used to be on stage before he turned his back on comedy and went full crypto-nonce. So it's nice that Maddix is picking up the torch from Burns, in terms of bravery in subject matter as well as quality of jokes. It's very much one man’s worldview presented in a coherently structured comedy set. That’s what I was missing from Frankie Boyle.