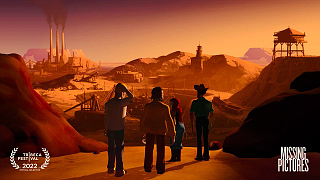 Comedy: “Nearly done now.” Imagine what it must have been like for the Greenwich Comedy Festival, organising a five-day binge of big laffs and then having the Queen die before it, resulting in a ten-day period of national mourning which overlaps it perfectly. Imagine their delight when they realised the final show of their festival would take place the day before the funeral, and that it would have to preceded by a one-minute silence. How do you start off a show in those circumstances? It turns out that the approach of compere Daniel Kitson – sighing deeply and saying in a reassuring fashion “nearly done now” – was the right one. For all the insistence that there was to be No Laughing during those ten days, the audience in the grounds of the National Maritime Museum seemed to be enjoying things just fine. And the big news of the week wasn’t considered off limits, with Tim Key having a couple of royal funeral poems all ready to go. Lower down the bill, Sarah Keyworth and Tadiwa Mahlunge both acquit themselves just fine: it’s headliner Dylan Moran who’s the more awkward proposition. He comes on stage drunk, divorced and bearing a keyboard that he admits he doesn’t know how to play, but spends most of the next half hour trying to anyway. The sheer tension in the room (well, courtyard) as he lets whole minutes roll by without a joke – and deliberately, too – is fascinating, and one of those things I hadn't realised I'd missed in two and a half years of limited access to live comedy. Unfortunately, he's too unfocussed to find a way to release that tension at the end, leaving the audience nursing the comedy equivalent of blue balls, and Kitson on stage yelling at us to run for the exits because Moran’s rambling has blown out the curfew by a good ten minutes. I hope he sorts out what he’s doing soon, one way or another.

Telly: For reasons that’ll become more apparent as this paragraph progresses, I’ve just been combing through the comics section of this site to track down an old review of The Sandman, only to find that it’s spent the last 14 years in Books rather than Comics. As far back as 2003, there was active speculation as to how it could be translated to moving images: two decades later, instead of the film we thought we were going to get, The Sandman is now a TV show on Netflix. It makes sense: after all, Neil Gaiman wrote it for comics in serialised form, with each issue having a wildly different feel from the previous one. That was especially the case for the early issues which make up what everyone is hoping is just the first season. If anything, it’s a little too keen to stick to the comics as a blueprint, though not as much as Gaiman's adaptation of Good Omens, which seemed terrified to drop a single word of his and Terry Pratchett’s writing. At least Sandman isn't afraid to chop and reshuffle things occasionally to keep it flowing as a series. There are a few individual episodes that stand out by a country mile from the rest – inevitably, they're the ones based around the issues that stood out in the comics run (24 Hours and The Sound Of Her Wings in particular). Tom Sturridge gets just the right amount of underplayed weirdness into his portrayal of the title character, and there are plenty of fun surprises in the casting overall (including at least three Taskmaster contestants). On the whole, they've done the comics justice, and I’d be happy to see more of this.

Theatre: You know me, I’m a sucker for a one-sentence pitch that makes you want to drop everything and see a show immediately. Here’s one: “a Japanese kabuki adaptation of Romeo And Juliet with music by Queen.” This is a genuinely accurate description of A Night At The Kabuki, Hideki Noda’s reworking of Shakespeare into something with a surface resemblance to traditional Japanese theatre. To be honest, the one element that doesn’t quite work is the use of songs from A Night At The Opera throughout - or more accurately, short snatches of those songs used mostly as underscore or to cover scene transitions, with no relevance attached to their lyrics. On the few occasions that a scene's allowed to play out across the bulk of a track, it works really well: you don't want to push that idea too far or you get Mamma Mia, but a bit more of that would be welcome. Maybe the main reason for the Queen connection is to act as a hook to lure you into a wild postmodern take on the play, in which the star-crossed lovers have stayed alive but forcibly separated for thirty years after their initial tryst. The main narrative thrust involves old Romeo and Juliet going back to the start of the story to try and persuade young Romeo and Juliet to make better life choices. Tonally, it's all over the place - several scenes in the first half are virtually pitched as panto - but it's a splendid ride from beginning to end. You've missed its London run by now, but hopefully it'll come back some day.

In the meantime, your Simian Substitute Site for October 2022 relates to Missing Pictures Episode 3: The Monkey Wrench Gang, which is the third in a five-part series of virtual reality experiences. In each one, Clément Deneux has asked a director to talk about a film they wanted to make but never got to do, and then produced a VR film that's part illustration of the interview and part dramatisation of the film. In this third episode, Deneux has an interview with Catherine Hardwicke, who hit the big time with the first Twilight film back in 2008. Off the back of this, she decided her next project would be an adaptation of Edward Abbey's novel The Monkey Wrench Gang. It didn't happen, and this VR documentary explains why.

So, yes, it's October, and for the (gulp) 25th year in a row I'll be posting daily reviews of everything I see at the 2022 London Film Festival. Will it include Missing Pictures Episode 3? Well, come back here every day from October 5th to find out. In a similar fashion to the last couple of years, the BFI Player will allow UK residents who aren't in London to still see some of the films on offer: have a look at the official site to find out more, and let me know in the comments below if any of them interest you. (Before Suze asks, I messed up badly with the timing of the new James Benning and won't be able to see that. Sorry.)