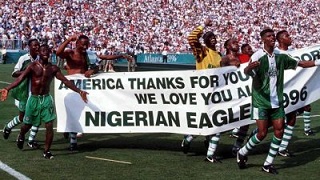 Belated update on the audio status of the Royal Festival Hall: when we saw The Menu there on Thursday, there were no subtitles and the dialogue was understandable. The conclusion is that if you avoid the first ten rows, then the sound should be okay, so bear that in mind for next year. But while we're on the subject of subtitles for the deaf and hard of hearing, it has to be noted that the subs on today's first film go a bit weird. Super Eagles '96 is a football documentary, so as you'd imagine there are a couple of shots of kicks in slow motion accompanied by a massive DOOF noise on the soundtrack as boot hits ball. In the subtitles, on at least two occasions, this sound is transcribed as [GLASS BREAKING]. What in the name of Daniel Amokachi is all that about?

Anyway: when Cameroon beat the world champions Argentina in Italia '90, it was the first indication that African football was getting ready for the big leagues. The Nigerians wanted some of that action for themselves, but the administration of the national team was in such a mess that it seemed unlikely. So they did what a lot of countries do in these circumstances: they hired a Dutchman. Clemens Westerhof (and later Jo Bonfrère) toured the country searching for fresh players to make up a new squad, and in the years 1992 to 1996 took the Nigerian team to all the major competitions: the African Cup of Nations, the 1994 World Cup, and the 1996 Olympics. All this happened while Nigeria itself was in turmoil, with its democratic elections getting turned over and the dictator Sani Abacha taking power. Still, at least he was a football fan.

Director Yemi Bamiro was here in 2020 (well, as here as you could be in a largely online festival) with One Man And His Shoes, a carefully constructed study of the dodgier end of the training shoes industry. This film is a similarly fine showcase for his storytelling skills: he admits that the football story basically tells itself, but he carefully threads through the political background without it ever overbalancing what we're mainly here for. Along with the expected archive footage, there are some terrific new interviews with the coaches and players, who have plenty of stories about what went on during those whirlwind four years. It has to be said, the interviews with Babayaro stand out because his accent is unlike anyone else's here: three years playing for Newcastle United have apparently completely removed the letter 't' from his vocabulary. Still, it illustrates the point Bamiro makes towards the end: this isn't just the story of a national team that had a decent run of form, it's also about how they paved the way for African teams and footballers to make their presence felt worldwide. 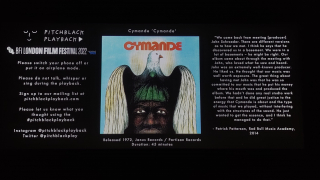 We're keen to stay for Yemi Bamiro's Q&A after Super Eagles '96, but there's a problem. Our next event at the BFI Southbank Studio is free and ticketed, and they've deliberately given out more tickets than the 40 seat capacity, to take account of possible no-shows. If we get there too late, we might not be able to get in. So we run up the two escalators out of the Odeon and across Leicester Square and down the escalators to the Northern Line and yell at the departure boards for five minutes to CHANGE and eventually ride three stops to Waterloo and up the escalators and across to BFI Southbank and -

- including us, there are a total of eleven people in the Studio. That means there are a minimum of 29 dicks out there who booked a ticket and didn't turn up, potentially blocking entry for a similar number of other people who might have quite liked to be here. The BBG suggests that if the festival does this again, they should charge for entry: after all, that's what they do at the normal Pitchblack Playback events.

Here's the pitch for Pitchblack Playback. People don't really listen to music any more like they used to: it's almost always an accompaniment to something else. What PP do is hire a cinema - typically London's Castle Cinema or Riverside Studios, as well as elsewhere in the UK and beyond - and play a classic album over its sound system. To make sure there's nothing else to distract you, they turn off as many of the lights as fire safety will allow, and give you a blindfold to wear to block out the rest. The album we're listening to today is the 1972 self-titled debut by Cymande, as a tie-in with the documentary Getting It Back: The Story Of Cymande which played in the festival on Thursday.

Theoretically you could do this at home with access to the album, a decent set of speakers and a bit of cloth. They would have to be a really decent set of speakers, though: cinema sound systems are pretty sophisticated now, and PP tend to do a bit of upscaling on their records to make sure the surround speakers get a workout. The effect of this is instantly apparent from the opening track Zion I, which feels like there's a wall of percussion instruments directly in front of your face, with the rest of the band playing loud and clear behind them. (It may go without saying, but PP also like to crank their records up, although not to the point of distortion.)

The BBG and I have done one of these before - a playback of Byrne and Eno's My Life In The Bush Of Ghosts - and we both felt that there was a point after a little while where you found yourself totally immersed in the music. For me it happens when we get onto what would have originally been side 2, where the band stretches out onto longer jams like Dove and Bra, and the extra length gives you more time to get lost inside a single track. One consequence of this level of involvement with a record, though: it makes it much more obvious which are the bonus tracks added to the original album when it was re-released on CD, as they don't quite fit into the flow of the rest. It's still a lovely way to spend fifty minutes, though, and leaves you surprisingly energised afterwards. 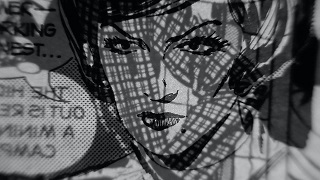 As is frequently the case with LFF experimental programmes, we’re at the ICA to see an underlength feature (65 minutes) padded out with no less than four supporting shorts. Theoretically, all of the films in this programme work with the idea of repurposing popular culture, so it’s hard to see how Adonia Boucherhri’s Blind Yellow Sunshine [artist's website] fits into this. Her lengthy explanation of her gently surreal world filled with yellow light, flies and albatrosses is that it’s some sort of reference to The Rime Of The Ancient Mariner, though none of that’s really apparent from the film itself.

The other three shorts fit the bill better, although they’re all potentially doomed by copyright issues. David Leister’s Roary [artist's website] takes the lion from the MGM logo, looping and layering it into an epileptic’s nightmare. Jan Soldat’s Staging Death [official site] simply strings together shots from the 70-odd times that Udo Kier has died in a movie. For film buffs, this quickly turns into a game of spotting where the clips come from: I recognised his impalement in Flesh For Frankenstein, but I’d be keen to find out which film has him running his own intestines through a film projector. And Anthony Ing’s Jill, Uncredited [subject's IMDB page] uses a more benign version of this approach to collate shots from some of the 2000 films and TV shows that background actor Jill Goldston has appeared in: her first few appearances in shot are highlighted by zooms, but a lot of the time you’re dealing with a thespian Where’s Wally.

As you can see, collage has been one of the themes of this programme, which leads us into our main feature. Lewis Klahr’s The Blue Rose of Forgetfulness is actually a collection of half a dozen collage shorts, working in a variety of styles. His preferred approach involves layering comic book characters on top of photographic backgrounds, sometimes with dialogue captions taken from the comics, sometimes with his own typed captions. But on other occasions he works purely with found objects, or comic books printed on cheap paper and backlit so that the image on the other side of the page bleeds through.

Klahr seems like a nice enough chap from his intro and post-film Q&A, admitting that as this is the first public screening he’ll be watching us to see what works and what doesn’t. Unfortunately, he commits the same sin as Iñárritu did earlier in the week by telling us how to watch the film before we’ve seen it, saying that just because the materials he’s working with have their own narrative baggage, we shouldn't assume that he’s telling straightforward stories. I’d have thought that was par for the course with this type of filmmaking: part of the pleasure for the viewer is creating their own narrative from the clues left by the filmmaker. Having said that, the section that works best of these six is a more or less straight retelling of a Greek myth, so there you go - it's got the right balance of narrative drive and cheeky disrespect to the source text. It's not as much fun as some of those other shorts in the programme, though: it's probably significant that in the Q&A sessions, the person who gets the most attention from the audience is Jill Goldston.