Reviewed today: All That Money Can Buy, Glass Onion: A Knives Out Mystery, New Normal. 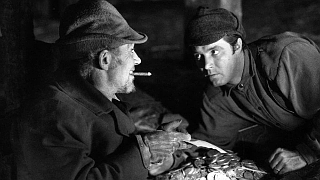 Sunday afternoons just seem right for archive presentations at the LFF, don't they? Maybe it's just a hangover from the days when weekend telly was full of old films. It looks like most of the audience here would remember those days, people so old-fashioned that they’ve printed out their tickets on paper. This is one of those rare occasions when an archive film doesn't have anybody around to introduce it, which is a shame - this is a glorious restoration of an 81 year old movie, and it would have been nice to hear more about the work it took to make that happen.

Jabez Stone (James Craig) is a struggling farmer living with his wife and mum. Things are constantly going wrong on the farm, and he’s running out of money. Why, he’d do a deal with the devil himself if it helped solve his problems! Along comes Mr Scratch (Walter Huston) with his seven year contract guaranteeing him the best luck. Signing in blood’s a normal thing to do in New Hampshire, right? Of course it isn't, and eventually congressman Daniel Webster (Edward Arnold) will have to step in and help Stone to save his soul.

William Dieterle adds lots of unusual touches to the film from the word go: he starts with two higgledy-piggledy lists of the people involved ‘in front of the camera’ and ‘in back of the camera’. One of the latter is Robert Wise, no less, and his editing adds some creepiness to the more fantastical sequences - I particularly love the early glimpses we get of Scratch, brief little inserts of negative that have vanished before you've had time to properly register them. There's also an interestingly ambivalent attitude to the country of its making: Webster consistently focuses on America's great achievements, while Scratch undercuts him with reminders of the slavers and the colonisers he's descended from. Smart and hokey at the same time, it's a proper Sunday afternoon film and no mistake. 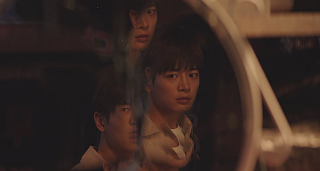 This is the first of two occasions today where we're asked by a film director not to spoil his film on the internet. New Normal apparently hasn't been released in Korea yet, and it appears to be so new that I can't find an official site or even a trailer online: the best thing I can link to above is a fansite getting excited about the couple of K-Pop stars in its large cast. It's large because it's a portmanteau, a form that seems to have died out everywhere except for southeast Asia, when they still bang out long films made up of several short films on a fairly regular basis.

Jung Bum-shik's portmanteau has a bang-up-to-date English title, and is based around the idea that social isolation has got worse since the pandemic. So here are six stories about various ways in which people try to cope with that isolation: being more helpful to strangers, getting to know your neighbours better, or using a dating app whose usage of personal and proximity data would be seriously frowned upon under GDPR.

You can see why Jung is taking this on a tour of festivals, because it's definitely aimed at movie buffs: each of its six chapters is named after a film. Some of the titles hint at what’s to come, while others are there to mislead you deliberately. The individual stories are entertainingly twisty, but gradually you start to realise they all take part in the same universe, one that looks like present-day Seoul but with much more unpleasantness being reported on TV. That, unfortunately, sets up a requirement for the last chapter to bring everything together neatly, and it doesn't quite pull that off. Still, it's an enjoyable watch, and fun to hear Jung's surprise afterwards that a British audience laughed so much at the more violent bits. Let me introduce you to the Prince Charles, Jung... 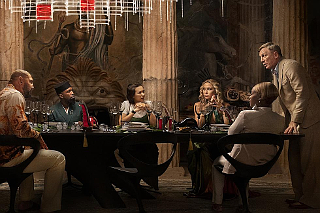 As I've stated before: I don't do galas. I was sorely tempted by this one, though: it's a Netflix film, so the gala might well be one of the few times it can be seen in a cinema. Glass Onion was the first film I tried to book for on the day tickets went on sale, and I literally saw the last four seats at the Curzon Mayfair screening vanish before my eyes. The four official gala screenings - the actual red carpet event at the Royal Festival Hall, and three later shows at other LFF cinemas - all sold out within the first hour or so of the booking period. So it was a surprise a couple of weeks later to find a few satellite screenings going on sale in other London cinemas - not publicised on the LFF site at all, but still offering the chance to see the film plus a half-hour package of highlights from the red carpet. So although it's not listed in the programme anywhere, we're having our own closing gala at the Ciné Lumière in the Institut Français. Maybe they assume Benoit Blanc is a French name?

As promised, we get some red carpet action at the start, which is primarily Edith Bowman doing interviews with writer/director Rian Johnson and most of the cast. There are two main highlights: Janelle Monae’s magnificent outfit, and Edward Norton's interview being photobombed by a disembodied arm holding an umbrella over his head. Everyone interviewed seems super keen to highlight the contribution of costume designer Jenny Eagan, to the extent that it feels suspicious, like those Pearl & Dean interview ads you get at the cinema where everyone’s been bunged a fiver to say ‘this film really has to be seen on the big screen’.

Finally, before the film we get a personal video plea from Johnson not to spoil anything. Well, let’s try. Tech giant Miles Bron (Edward Norton) has sent out invites to his closest friends, all disruptors of one sort of another, for a weekend on his personal island. It’s intended as a straightforward get-together with a murder mystery party attached. Initially, the biggest mystery is why gentleman detective Benoit Blanc (Daniel Craig) is there, given that Bron didn’t invite him. Other mysteries will follow.

The only real complaint you could have about Glass Onion is that it’s a sequel to Knives Out, and it’s never going to surprise you as much as the first film did. It took ages in the original for Blanc to even say anything, let alone make his presence felt: here, he’s got the scene that leads directly into the title card (a scene that has a ridiculous number of star cameos stuffed into it, two of whom have subsequently died). And it's got all the bloat you associate with sequels: it’s longer, it’s more elaborate, everything’s done on a bigger scale, it has a scene with a ridiculous number of yadda yadda yadda.

But you probably would have guessed that before seeing the film. Put those niggles to one side, and this is another all-star mystery which takes the whodunnit aspect of itself deadly seriously, while having big goofy fun with everything else. The cast is terrific: but taking Johnson’s advice to heart, highlighting particular actors for praise could perhaps count as a spoiler. So I won’t. But if you can catch Glass Onion's tiny theatrical run in November before it hits Netflix around Christmas, then do it: like its predecessor, it’s an audience pleaser that works best in the presence of a large audience. I have not been paid by Pearl & Dean to say this, by the way.

That's the LFF all done for another year: give me a bit of time to process what I've seen, and I'll get back to you shortly with The Wrap Party.