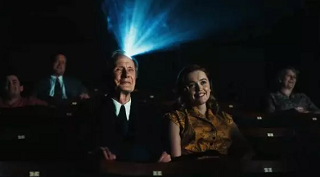 I mentioned the Japan Foundation Touring Film Programme on Sunday, although that's been rather overshadowed by the discovery today that my Bobi Wine review in the same post has gone viral in Uganda. Anyway: several years of going to JFTFP has resulted in my seeing a lot of recent Japanese family dramas. I suspect this is down to the Foundation trying to counter the stereotype of Japanese cinema all being either anime or weird Takashi Miike shit. In the process, though, it’s set up a whole new stereotype, at least in my mind: the Japanese love stories about people dying slowly from terminal illnesses. Which is annoying, because seventy years ago the Japanese made the single best terminal illness movie ever – Akira Kurosawa’s Ikiru, which for my money might even be the best film the director ever made. Ever since then, his fellow countrymen and countrywomen have tried to copy it, but never quite got the balance right.

Now it’s the turn of director Oliver Hermanus to have a go at an English adaptation, set in London at around the time the original film was made. Bill Nighy plays Williams, who has a job with London County Council looking after town planning. When his doctor tells him he’s only got six months left to live, he skives off work while he decides what he should be doing next. First he goes to a coastal town to try living it up a bit: then he strikes up a friendship with a younger female co-worker to see if her happier outlook on life helps him. But eventually, he comes up with a project that he can focus his attention on.

Kazuo Ishiguro has written the screenplay for this version – presumably on the assumption that he’s got a foot in both camps, as it were – and happily, he doesn’t damage the original too much. What makes Ikiru the best cancer movie is that it removes every trace of sentimentality, almost to the point of callousness – the leading character’s tumour is given a closeup (in x-ray form) before we’re even introduced to the character himself. The one time the film is allowed to get mushy is literally in its final scene, which makes it all the more devastating: the tears it jerks out of you have been completely earned.

Ishiguro sticks like glue to Kurosawa’s original structure, including his masterstroke of rearranging the chronology to make the second half a celebration rather than a race against time. (The original's title translates as To Live, after all, and not To Die Slowly But Without Too Much Physical Unpleasantness.) But the new version can’t quite avoid a couple of sentimental interludes along the way, so that when that final scene comes it doesn’t have quite the same impact. But it’s a film made with love by all concerned, with Nighy getting the balance between sadness and determination just right, and some clever visual work to evoke fifties Britain without littering the screen with period signifiers. The BBG and I can now add {Living/just down the river from County Hall} to our list of Movies Viewed Very Close To One Of Their Key locations, just behind {King Kong/a couple of blocks away from the Empire State Building}. 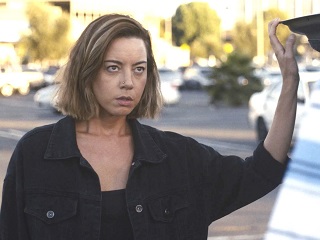 This is quite a coincidence, seeing that part of our previous film was set in the Parks and Recreation department at County Hall. It’s been several years since Aubrey Plaza was one of the stars of Parks & Rec, and she's subsequently carved out an interesting career in a number of small indie movies. The Universal logo at the start of this one suggests it might be a bigger deal.

Plaza plays Emily, a woman in LA struggling to pay off her student debt with a series of crummy temp jobs. One of her co-workers passes on a phone number that he says will help her get rich quick. Inevitably, it’s a scam – a man called Youcef (Theo Rossi) is handing out fake credit cards, and offering people a cut of the resale value of any big ticket items they purchase with them. Emily takes him up on the offer, buys a big telly with her card and gets two hundred dollars cash in hand. She isn’t under any obligation to go back and offer her services to Youcef again. But she does.

Why are Americans so reluctant to implement chip and pin? That niggle aside, John Patton Ford’s debut as writer/director pulls off a pretty impressive feat: it takes a character arc that a TV show like Breaking Bad spread over six seasons, and compresses it into a 95 minute film without it feeling contrived in any way. Emily starts off the film as someone who’ll walk away from a job offer at the slightest hint of criminality, but finishes up in a different place entirely. The film painstakingly shows us the series of minor compromises she makes along the way, none of which seem big on their own but gradually add up into something huge.

The film wouldn’t work unless you had some degree of sympathy for its lead, and Ford carefully mixes in some jabs at employment practices in general and the gig economy in particular, to set up an environment where someone would consider Youcef’s scheme as an option. It also helps having Aubrey Plaza in that leading role: her transformation is, again, gradual and therefore totally convincing. You're willing her to succeed even when you think she shouldn't really be allowed to, and that's quite a thing to achieve.

In summary: two good films today anchored by two great lead performances, both featuring actors giving Screen Talks at this year’s festival, neither of whom could be arsed turning up to introduce today’s screenings. Boooo.