Simian Substitute Site for November 2022: Timkey The Monkey And His Magic Flute 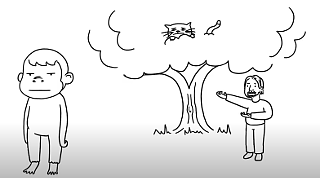 Books: I think that The Belated Birthday Girl has changed the way I think about the Edinburgh International Book Festival, and I kinda like it. In the past, I'd go specifically to see authors: these days, we tend to book for talks on subjects that attract our interest. Maybe it's a general move from fiction to non-fiction that's triggered this? Anyway, one of the highlights of the festival this year was a talk by two paleontologists, and one of their books is currently our audiobook at bedtime. Otherlands by Thomas Halliday is a speculative history of our planet told in a beautiful way: each chapter is a detailed pen portrait of what Earth would look and feel like at various points over the last 500 million years or so. Halliday's masterstroke is to tell the story backwards - chapter 1 is 50,000 years ago, chapter 2 is 2 million years, and so on - which stops human development becoming the main focus of the narrative: by the start of chapter 3 we're out of the picture as a species, so we can concentrate on all the other fascinating stuff going on. As an audiobook (read by Adetomiwa Edun), it's more of a meditative experience than a compendium of hard science fact, but Halliday's rich imagery gives you plenty of lovely ideas to stuff into your head before bedtime.

Food & Drink: As Twitter enters what everyone assumes is going to be its death spiral, let’s take a moment or two to think about another social media platform that really should be considered dead by now. Moblog was incredibly fashionable when I joined back in 2004: a website where you could share pictures you’d taken on your phone, with text attached? Who else is doing that? Eventually, the answer to that question became ‘loads of people, especially Twitter and Twitpic’, and Moblog dwindled into irrelevance. But when Twitpic crashed and burned several years ago because of an earlier bout of Twitter’s arseholism, and I needed a mobile miniblogging platform that I could easily post to while drunk, Moblog started looking enticing all over again. So since 2014 I’ve been using it specifically for posting live reports on the beers in BrewDog’s annual Collabfest. It’s quite possible that nobody else is using Moblog these days - when you look through the last thirty days of posts, it's hard to find anything that hasn't been posted by some sort of bot - so I'm nervous that one of these days I'll go there and find it gone, and have to move over to bleedin' Instagram or some such nonsense. Until then, here's my on-the-spot report from Collabfest 2022, pages 1 2 3 4 5 6 7 8 9 10 11 12 13 and a coda to finish off.

Music: Two songs into ABBA Voyage, and Bjorn is running towards the front of the stage and clapping in time. Inevitably, all of us start clapping along with him. It’s about four seconds before I say “wait a minute, why am I clapping along with you? You’re not here, you’re a computer generated hologram being projected onto the stage. Actually, you’re not even that, you’re just a high resolution animation on a massive telly. Come to think of it, why am I even talking to you?” The most astonishing thing about ABBA's much hyped virtual show is that you don't spend every minute of it thinking something like this. A huge amount of technical effort has been put into combining real and virtual elements in such a way that the boundary between the two is invisible. The physical lights in the arena have been synced up to match the lighting of the fake ABBA members 'on stage': the live ten-piece backing band keeps precisely in time with the pre-recorded vocals, in a rare example of arse-backwards karaoke: there are video interludes covering the pauses for costume changes that aren't actually happening. Everything is done with the aim of convincing you that you're at a real gig, and they've nailed it (apart from the lack of queues for the bars and cloakroom being totally unrealistic). If this was an event put together to showcase a bunch of average songs, it would be pretty special already. Except it's showcasing a bunch of ABBA songs, which lift the whole thing to stratospheric levels. No, we don't get a hairy Viking on drums like I was hoping for, but it's still one hell of a night out.

In the meantime, your Simian Substitute Site for November 2022 is Timkey The Monkey And His Magic Flute, a short animation by Phyllida Hickish. This is a slightly complicated one to explain. Richard Herring’s Leicester Square Theatre Podcast is still going, somehow, although it’s now changed its name permanently to RHLSTP to cope with those occasions when it moves to another venue. For example, when it had a short run in Edinburgh during the month of August, and one of his guests was the comedian and poet Tim Key. In one of those running gags whose origin is lost in the mists of time, Herring has in the past kept referring to his guest as Timkey, which he thought would be a nice name for a cartoon monkey who has adventures. In episode 402 of the podcast, Herring finally came up with a script for this cartoon and asked Key to read it with him. He then asked if one of his listeners could, er, 'illustrate' it, and Hicklish duly obliged. A couple of things to note - firstly, if you're still coming to the Simian Substitute Site after 24 years expecting family-friendly content, you're going to be sadly disappointed: and secondly, it's worth listening to the podcast (from about 5 minutes into the episode) to catch all the bits Hicklish had to edit out to end up with a coherent soundtrack. ("Is that the voice you're going with?")

What can you expect here in November? Well, nothing much: you saw how much went on in October, and I need a rest. (Also, Typepad appears to be a bit rickety at the moment, so apologies for any crashed pages and missing images you may have been seeing here recently - I've got zero control over that.) There's still a bit more London Film Festival-related activity to be done, though, so you can at least look forward to The Wrap Party and another extension to That Bloody Index. Apart from that, I think it'll be a bit quiet, sorry. Complain in that box down there if you must.