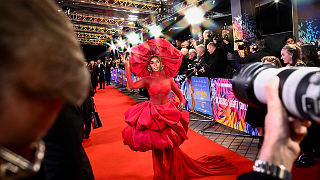 As ever, let’s start our roundup of the 2022 London Film Festival - yes, I know, one whole month after the event, I've been busy - with a look at how what we saw this year breaks down under the Clare Stewart Classification System:

Quite a decent balance, all things considered. In terms of the high-end stuff, we managed to see four Galas at their overflow screenings, thus avoiding having to pay Gala-level prices. The two entries from the Official Competition that we saw were both excellent, although we managed to miss out on the actual winner. The lack of entries we caught from the Documentary Competition initially surprised me, until I realised the other way of looking at that is to assume the wrong documentaries were put on the shortlist, because there were some magnificent ones this year.

So, now we've established my disagreements with the LFF jury, what were my own personal favourites? Well, I won’t say just yet, and instead I’ll give the floor to The Belated Birthday Girl to say what she liked, or didn’t. Not For Me
LFF Expanded, Crows Are White, The Whale

Another LFF over, and another pretty good one at that. 32 films, plus the LFF Expanded (of which more shortly), the online shorts, and one Pitchback Playback event (of which more shortly, again). No screen talks, though, because by the time they announced them, we’d already bought tickets for films in the time slots when all the interesting ones were happening, which is a shame.

Apart from the number one spot, the order of the Top 5 keeps changing in my mind. EO would probably have come definitely higher if there had been a little less of the actual human interactions, even though I recognise they were needed to some extent to give context: it’s just that whenever they were happening I wanted to get back to EO’s journey and perspective. But Blue Island took the top place because of the imaginative process of using the history of Hong Kong’s protests to illuminate the current situation, and vice-versa. The Menu in the end took second place because of the sheer fun of it: although important documentaries Blue Island and Bobi Wine had to be included on my lists, in general these days I find that I am tending more towards films that aren’t going to be a downer. Maybe it helped seeing this as the Surprise film, knowing nothing at all about what it was about or where it was going, but it ticked a lot of my boxes.

Two more documentaries completed my Top 5. Although Into the Ice obviously has a serious and urgent message to it, ultimately the stunning visuals and the personalities of the scientists and filmmaker make viewing this an uplifting experience. And finally, the Cymande documentary not only introduced me to some great music, but really showed how the re-purposing by sampling can give new life to the music sampled and benefit the original artists, too.

On the Not For Me list, there are just 3 to call out. I think I am done with the whole Expanded thing, at least for a while. To be honest, I don’t really think it belongs in a Film Festival at all (and as an aside, I am not convinced the TV programmes they show these days do, either: it’s not the London Moving Image Festival…), and some of the ones which worked best as experiences were the ones which least justified the format. Something like The Monkey Wrench Gang would have been as good or better as a straight-up animated documentary short, and although All Unsaved Progress Will Be Lost perhaps made enough use of the format to justify it, I’m not sure that’s enough to make me bother in future.

In terms of films, Crows Are White was a very odd thing and made quite uncomfortable viewing. Part of me is still not 100% convinced it really is a factual documentary: the descriptions of the monks and their rituals felt too scripted (and stereotyped), as did some of the events that took place, and some of the filming felt too staged. A film which opens with the filmmaker telling you he’s a liar doesn’t necessarily make you trust him when things don’t feel right. But if we have to take what we are told about it being factual at face value, it definitely leaves an unpleasant taste in the mouth (although to be fair, it probably would as a fiction feature, too).

Finally, there are a number of reasons The Whale didn’t work for me, but the biggest one is that it just felt too much like theatre, not enough like a film. The script, the dialogue, the character interactions, all felt far too stagey for me. I guess that’s what happens when you get a playwright to adapt his own play for the screen, rather than getting a screenwriter involved: you end up with a play on film.

Apart from that, there were a few other minor negatives to mention. I’m still not keen on the use of the Royal Festival Hall for screenings. The sound really isn’t up to it, and although you can get reasonable sound if you choose your seat wisely, that really shouldn’t have to be a consideration. Maybe they get it cheap or something, but purpose-built cinemas are much better for watching films, unsurprisingly.

As alluded to at the start, the late announcement of the screen talks meant we couldn’t get to any of the ones we would have been interested in. Screen talks have always been a highlight of the festival – part of the fun of the festival is always seeing the filmmakers in person, and the extended format of the Screen Talks gives more time for that – but the recent trend of announcing them late on has made it harder to get to them if you are also going to see a number of films. [Though they're now all watchable on the BFI YouTube channel - Spank]

One final slight negative is the limited archive section this year. We did see a couple of archive films, but somehow the section was a little disappointing compared to previous years, a feeling increased by the fact that the Special Presentation was so recent I not only could have seen it on release, but actually did.

I would like to give a special mention to the Pitchblack Playback Cymande event. This was a terrific accompaniment to the documentary, and given that we often go to music documentaries in the festival, I hope the LFF carry on with these tie-in events in future years. The only thing I felt was a shame was the way they released the tickets which meant we rushed over there to make sure we could get in in case there was a queue, only to find there were only 11 of us and the rest of the seats were empty. Personally, I’d be happy to pay to attend these, and I think selling tickets rather than giving them away might be a better model. But either way, I hope they carry on with them.

Anyway, another year over, and here’s looking forward to 2023. It will be interesting to see what changes the new director – whoever that ends up being – brings to it. Personally, I’d like to see an end to the categories, stopping using the Royal Festival Hall, dropping the Expanded section (and all the telly), a bigger and better archive section (with a proper Archive Gala), and a return of the Animated Shorts program for adults. I’d also like it if somehow they could announce the screen-talks at the same time as the rest of the programme.

But I guess we’ll just have to wait and see whether any of that happens. In any case, I am sure we’ll be back next year. Me again. I’ve got to admit, picking a top five this year has been really hard. I wouldn't necessarily say that there were any life-changing discoveries in this year's programme, but the overall standard was consistently high (apart from a couple of iffy ones), making it hard to narrow it down to just five.

In the end, I've gone for five very different films that nevertheless all had one thing in common: they showed me something I hadn't seen before. Or, maybe, something I had seen before, presented in a whole new way. An animal-in-peril story, but shot by a director in his eighties with the visual invention of one in his twenties: a slab of experimental folk horror, but one which still delivered on the chills: a documentary about the current state of Hong Kong, but carefully layering in references to the horrors in its past: a thriller about a state conspiracy and how one man becomes unwillingly trapped in it, but set in a seat of high Islamic learning: and a film from Iceland, but one that was less crap than the one we saw there this year. In short -

Let me tell you, it took ages to hammer that list down to five. The ones that got chipped away along the way would have to include - in no particular order - The Woman In The White Car (in context, the line 'who the fuck are you?' gave me my biggest laugh this festival), Bobi Wine: Ghetto President (for being an edge-of-the-seat retelling of recent history, and not just because it made me viral on Ugandan Twitter for a week), Living (for not ballsing up Kurosawa's original script and structure), Emily The Criminal (a fine mix of thriller and social commentary, cruelly already banished to the video shelves with no theatrical release) and Getting It Back: The Story Of Cymande (which, alarmingly, is the only film in this list of ten which could be said to be unequivocally fun).

The only real stinker was The Origin, with Crows Are White coming a close second: seeing those two back to back, with a hurriedly-grabbed slice of Pizza Hut pizza separating the two, was a definite low point of the twelve days. But why dwell on the low points? Instead, let's finish off with a few thankyous. To the Pals who came along to screenings: The Belated Birthday Girl first and foremost, natch, but also Chris, Diane, Jon, Lesley, Nim, Sarah and Teresa. To the FUers we met along the way, notably DasBoot (though he didn't see us), FilmFan, MaxFischer and the welcome return of RussMeyerGirl. And, of course, to all the people involved in keeping the LFF running, up to and including outgoing boss Tricia Tuttle. If anyone's looking for a design for next year's LFF t-shirt, I reckon you could do a lot worse than one featuring the list
Whitaker&
Wootton&
Hebron&
Stewart&
Tuttle.
laid out in fashionable Helvetica. Being a monkey, and all.