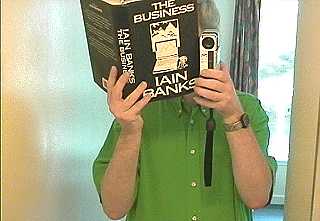 A quick postscript to yesterday's diary. Jon and I arrive back at the flat at 2am following Redball, only to find there's no milk left. No problem: we have a 24 hour CostCutter down the road - as enthusiastically reviewed by Old Lag on Saturday - so we head off there to pick up the dairy products we need for the rest of the week. The 24 hour CostCutter is closed. Popping in there early this morning to get the supplies, I spot a card listing the shop's opening hours displayed on the counter. I'm quoting from memory here, so apologies if I miss anything out: "Opening hours: we usually open around 9 or 10, sometimes as early as 7, sometimes as late as 11 or 12pm. Closing hours: we usually close around 5.30 or 6pm, sometimes as early as 3 or 4, sometimes as late as 11 or 12pm. Some days or afternoons I'm not here at all, though I've been here most of the time recently." It's probably easier to just put "24 hour" on the shop front, I suppose.

Moving on... it's always worried me that whenever I start talking about books with someone for the first time, within about fifteen minutes they invariably say, "I bet you liked The Wasp Factory, didn't you?" It unnerves me tremendously that something in my personality makes people think that a book about a disturbed teenager with a demented brother who burns animals for fun would appeal to me. Particularly as they're right. Ever since that splashy debut back in 1984, I've been a big fan of Iain Banks' "straight" fiction (I can take or leave the sci-fi books he writes every other year, but that's just me). There are a lot of Banks fans about, so it's easy to see why Maxton Walker's play The Curse Of Iain Banks is drawing capacity houses every day, despite being performed in the Gilded Balloon's Wee Room, a tiny sweatbox which is available for rent to anyone requiring a scale model of the Black Hole of Calcutta.

The lead character is Ian Banks (Gordon Rennie): that's Ian without the 'i', unlike "the real one". His problem is simple: every time Iain Banks publishes a book, a member of Ian Banks' family dies. This has been going on ever since The Wasp Factory, and Ian's running out of time and relatives. As his father gruffly observes, "the man publishes a book every bloody year. Why couldn't our family have the Curse of J.D. Salinger?" When the new Banks novel The Business comes out (I'm halfway through it at the moment, since you ask) and the curse strikes again, Ian takes it onto himself to investigate what the cause of the curse is, and if it can be broken. What he finds is a tangled web of family secrets and confused identities worthy of the "real" Banks himself. It's a cleverly plotted little mystery tale, that doesn't really require a full knowledge of Banks' works to enjoy (although you may find the parallels with The Crow Road interesting). With a cast of three (Sarah Gudgeon and Alun Cochrane fill the other roles) and no props other than a table, a couple of chairs and a picture that ultimately holds the secret of the curse, this is a great example of getting the maximum theatrical impact using the minimum of resources. But bring your own oxygen.

Festivals are meant for experimentation and new experiences, so I feel a little awkward about seeing Fantastical Voyage, a show I've already seen once when it last played the Fringe back in 1996. Still, I had a tremendous time then, and it's good to see it back again. It's the work of Gavin Robertson, best known for his two-man mime show Thunderbirds F.A.B. in the early nineties, which convincingly brought Gerry Anderson's puppets to life as the cast wobbled around on invisible strings and mimed the big action scenes by just using their hands. Fantastical Voyage does the same thing with the animated monster movies of Ray Harryhausen, in a plot that liberally steals from a dozen or so movies and compacts them all into a single hyperactive adventure yarn.

Adventurer Harry Potter (Wayne Forrester) and first mate Tom Allison (Robertson) go under the sea in their newly-created "sub-marine" to track down the crew of a ship that's gone missing. On the way they encounter giants, sea monsters and even a tyrannosaurus rex before coming face to face with Darius, the evil genius responsible for all this beastliness. As with Thunderbirds, this is an affectionate recreation rather than a piss-take: you feel jealous that two grown men can be having this much fun on stage as they construct an entire imaginative universe out of their bodies, two pipes and a fag case. Robertson in particular deserves credit for getting the jerky stop-motion feel of the monsters down to a tee. Ripping stuff. 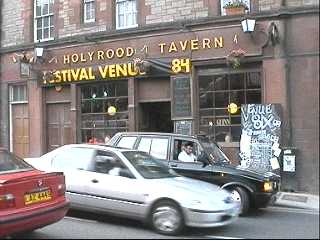 The publicity material for comedy sketch show The Leisure Virus mentions some pretty heavy influences. Chris Morris' Blue Jam,, the League of Gentlemen, the Booshes both Mighty and Arctic. The implied message is to expect warped, surreal sketch comedy that isn't afraid to offend where necessary. Certainly some of the sketches go into that pleasantly dark area where Blue Jam sometimes ends up: the best and longest one shows a Gestapo officer torturing a magician into revealing how he saws a woman in half. Other sketches take a more deconstructive approach to comedy itself, such as the man whose attempts to tell his girlfriend jokes are destroyed by her insistence at taking them literally. ("Why would you think that I'd think you'd made her go to the West Indies?") The whole thing's held together by regular monologues from a kind of professional street lunatic, who among other things enjoys planting scratch cards in people's mail to ultimately get them addicted, thus generating extra money for charities. The script by Chris Head and Barry Ferns shows them to be writers worth looking out for in the future, and the cast of five attack this stuff with the wicked enthusiasm it deserves. Go see. But bring some of that oxygen from the Gilded Balloon, as the back room of the Holyrood Tavern appears to have none whatsoever. 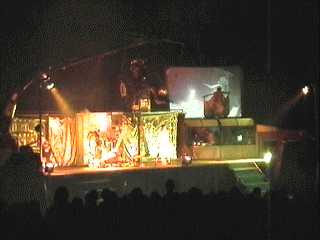 Cinderella rises through a stage trapdoor to the sound of Spybreak by the Propellerheads, carrying a big fuckoff rocket launcher. She shoots the Ugly Sisters' plane out of the sky and it crashes to the ground. By this point in Turbo Zone Presents Cinderella, it should have become apparent that these people are capable of anything. This show should be the talking point of this year's Fringe, but hardly anyone seems to know about it, due to a combination of poor publicity and the fact that it's listed in the Fringe programme under Dance. If they'd listed it under a more representative category, such as Big Mad Exploding Shit With Techno Music And Motorbikes, it'd have the audience it deserves.

Performed outdoors in the University Old College Quad, Cinderella uses our familiarity with the story to keep us hooked as they take the basic elements and bash them out of all recognition. The initial sections where Cinders escapes a war zone and goes to work for a genetic scientist are a little dull, but once the Sisters turn up and the invites to the ball arrive, the show turns into a full-on audio-visual assault. The carriage that takes Cinderella to the ball is a huge metal affair spouting sparks and hoisted up on a crane. Her courtship with the Prince takes place thirty feet up a rope without a safety net. And then there's the giant robot that turns up for reasons that I never quite fathomed out. But who cares? This is big old-fashioned circus fun the way Archaos used to make it, without the occasional flashes of pretentiousness that only the French could add when they're playing with flamethrowers and chainsaws: Turbo Zone know we're just there for the spectacle, and they deliver in spades.

To calm down after that, some late-night cabaret at the Queen's Hall. "Sorry about my voice," apologises Marc Almond at the start of the show, "I'm having my tonsils out soon." Considering some of the things that have allegedly made their way past Marc's tonsils over the years, it's amazing they've lasted this long. Truth be told, Marc's in fine voice, the best I've heard him for a while. Working to a basic nighttime theme, he does a selection of songs from the whole of his career, including some from the new album with a similar concept, Open All Night. The cabaret tag applied to this show sits a little uneasily at first, as Marc goes though some newer songs with two musicians and a drum machine. But the quieter middle section of the show works the best as the drum machine gets put away and the backing's reduced to a single keyboard or guitar. There's a moment of pure magic when Marc performs The One And Only You unaccompanied and unamplified, wandering around the auditorium as he sings. The final song is almost as lovely, as Say Hello Wave Goodbye gleefully degenerates into an audience singalong with Marc encouraging us all from the stalls. It's incredibly brave of Almond to move into this type of cabaret show after years of pop stardom: but then again, nobody's ever accused him of lacking spunk.

Grizelda - This has been my 1st visit to Edinburgh in 10 years. I've been to a number of Fringe events ranging from Phill Jupitus's revue to the Tattoo!  All great fun but the prize for the strangest show I've seen must go to Think No Evil Of Us, David Benson's tribute to Kenneth Williams.  Brilliantly done but why oh why did he spend half an hour in the middle talking about his sick mother?  I also never realised just what a wide range of events there are at the Festival.  I'll have to come back again, that's for sure!