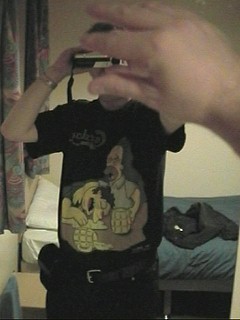 Golly, that was a good night (see Thursday 27th for details). However, the team's internal timing is completely screwed for all of today as a result: I don't get to meet up with all the pals for the daily comments session (the ones that follow were eventually gathered on the train home on Saturday), and the diary for Thursday doesn't get uploaded until close on 7.30pm. Apologies to those of you who stayed late at work to wait for it. (You never know...)

Anyway, today I just make it out of bed in time, and get to the Filmhouse for the third McLaren Animation Programme with seconds to spare. Much the same mixture as on Monday, but less computer animation and more of the traditional drawn and claymation stuff. Best ones: Edward Foster's Pensioner Penny, a silly little thing about one old woman's struggle with a giant inflatable chicken: Inger Lise Hansen's Hus, a bit like those time-lapse films of vegetable matter decaying, except done with a house: Mole Hill's Dr Vesalius, a beautiful piece of clay animation based on the life of the great Renaissance anatomist: and best of all T.R.A.N.S.I.T., a brilliant little puzzle picture which I've seen before, but am glad to see a second time as now it all makes some sort of sense. (The story goes backwards in time, following a mysterious suitcase on its journeys through Europe, tracing back from a murder to the events that initially inspired it.)

I'm paying Richard Herring £19 to entertain me today, and the first nine pounds goes towards his play Playing Hide And Seek With Jesus. It's become a tradition over the last couple of years that as well as doing his usual schtick with Stewart Lee (of which more later), Herring also writes a play for some of his pals to perform. Unlike previous years, he doesn't act in this one, but familiar faces such as Paul "Curious Orange" Putner make an appearance. A neat little tale of thirtysomething college friends trying to make sense of their lives, it's distinguished by the way Herring makes a real effort to define the participants in the story as distinct characters, rather splitting a stand-up monologue arbitrarily between six people. There's some ferociously good observation at work here - during a rather tense reconciliation scene following a big argument, Putner's character suggests that they try to make the moment less tense by talking in Northern regional accents - and the jokes are pretty damn fine. If I ever want to express extreme displeasure at something in the future, I suspect I'll be using the line "I'd rather rim Ann Widdecombe" from now on. 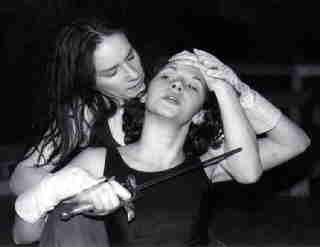 I meet up with Jon and we go to see seven women beat the shite out of each other for an hour or so. That's the kind of guys we are. Babes With Blades is an all-woman group of Chicago stage fight choreographers and actresses, formed because they were fed up with the lack of opportunities in drama for showing off their skills and decided to make their own. The show is basically a series of staged fights, both unarmed and armed (swords, sticks, even a bullwhip at one stage). The scenes are done with various levels of tongue-in-cheek (notably a scrap during a Xena casting call and a spoof of Buffy The Vampire Slayer). Ultimately, although the Babes put a tremendous amount of energy into the show, it doesn't quite come off: as they only have a minute or two in each scene to set up a conflict before the ruck breaks out, you can't really get dramatically involved in the outcome of each fight, so ultimately it all rests purely on the choreography, which isn't quite good enough to carry the audience. Also (he says, delving into the murkier areas of the male psyche for a second), although the idea of female aggression is incredibly sexy, the fact that it's another woman taking a beating at the receiving end does leave you feeling rather queasy about the whole idea. All the reviews published so far for this show include the words "mud" and "wrestling" in the final sentence, and although Babes With Blades never drops completely to that sort of level, it gets very very close. 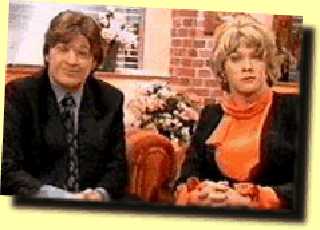 Last event of the day is This Morning With Richard Not Judy, Stewart Lee and Richard Herring's touring version of their BBC2 Sunday lunchtime show. As with the TV version, it's heavily reliant on catchphrases and running jokes built up over the series and their earlier Fist Of Fun, and as the rest of Spank's pals haven't actually seen them before they end up fairly bemused by the whole experience. They do work well as a double act, bouncing ideas and impromptu gags off each other effectively throughout the show, although all too often they fall back on their roles as Lee the rational intellectual and Herring the sex-obsessed dickhead. For me (although Lesley disagrees with me violently on this one), the only point where it rises above the norm is the extraordinarily dangerous encore where they reflect on the anniversary of Princess Diana's death. Lee tries to understand the thought processes of the person who left an inflatable model of ET alongside the floral tributes (true story, apparently): Herring heckles him throughout the routine saying that some subjects are totally unsuitable for comedy, and then proceeds to tell his own story about how he drew a picture of an ejaculating penis in one of the books of condolence. It's an astonishing exercise in seeing how far you can push an audience before alienating them completely, and the only way they can get away with it is by assuming that the bulk of their audience don't particularly care about the woman. The evidence would appear to indicate that the bulk of their audience don't. Arguments on the nature of audience alienation continue at the Filmhouse bar until the early hours of the morning.

Ken - it's always dangerous to just walk into a venue and book for the next event without finding out anything about it. Andy Smart's The Dope wasn't particularly funny if you've as little experience of drugs as I have. He passed around a joint to the audience during the show, but I've never smoked before so I don't know if I did it right. Adam Hill was another Aussie standup - haven't these people got bars to tend or something? Steve Punt's show, The Hannibal Lecture, was the best comedy I've seen at the Fringe, although it was the most expensive too. The Film Festival's surprise film was My Name Is Joe, which did very well at Cannes but is actually a really bad chick flick with no redeeming qualities.

Christine - Lee and Herring wasn't for me at all, I'm afraid I left long before the end. The National Theatre of Brent's Love Upon The Throne was appalling: no humour or cutting edge at all, very tame.

Jon - some interesting acts on Mervyn Stutter today - Noel James (very clever with words), Earl Okin (relaxed jazz/easy listening style), Kenny Young and the Eggplants (wish I had time to catch their full show before I go home). Skin Tight was a very intense, very fine piece of physical theatre. Babes With Blades had a surprisingly eclectic audience - not all that entertaining, but the linking Indian narrative was nice. My Name Is Joe is Ken Loach in fine form, with great acting throughout (Peter Mullen is absolutely superb), although the ending doesn't quite tie everything together.

Lesley - the Princess Di stuff in Lee and Herring was disgustingly gross, and I walked out. Love Upon The Throne wasn't much better - tourist tosh.

Sylvia - Medieval Musical Medley was a bit of a surprise, as it had no medieval music in it at all - it was a kind of pantomime about a princess that was good in a childish sort of way. The Book Festival's whisky tasting event was very enjoyable, but you were expected to try fifteen whiskies in an hour, and as a result I slept through most of Lee and Herring, so I can't say much about them.

Rachael - queued for ages for a returned ticket for Perfect Days, and I'm glad I did. Great to see it with a Scottish audience who obviously got more out of some of the jokes than the rest of us did. "Do I want to live in a gay scene dominated by QCs and candidates for the new Scottish Parliament?" Sylvia must have enjoyed her Book Festival event, as she was telling me afterwards about this Tisky Wasting she'd gone to.