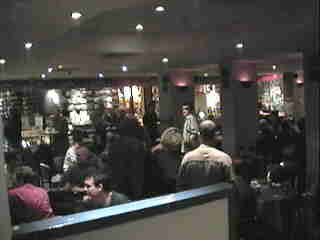 A quick word needs to be said about the glorious Cafe Bar inside the Filmhouse Cinema, headquarters of the Film Festival. As a team we've ended up inside there on a couple of occasions since we arrived: partly because it's fairly close to the flat, partly because I'm in and out of there fairly regularly to see what's happening on the movie front, and partly because it's great. Perfect for a quick coffee between films or a full-on late night booze session, and the food's wonderful (anything from the traditional filled rolls to assorted veggie delights). And it's a nice atmospheric little room with decent music playing in the background. London's National Film Theatre (where I've been known to hang out once in a while) would kill for a cafe area as good as this - maybe they should, because the current one still hasn't picked up any atmosphere in the nine months since it opened.

But enough of the restaurant reviewing. The reason for being at the Filmhouse is the first of the Post Office McLaren Award screenings. The Film Festival gives out a couple of prizes every year to films that have been particularly popular with the audience: the main one is the Standard Life Best Gala Film award, which the audience vote for at the big mainstream gala screenings (this is why Ken had a voting form personally scrutinised by Vinnie Jones when he saw Lock, Stock and Two Smoking Barrels last night, in case you were wondering).  But the Post Office McLaren award (named after Canada's most famous animator... and, er, the Post Office) is specifically awarded to the most popular British animated film. So the audience at this screening (the first of three, each with a different selection of films) are given a form with the names of fourteen animated shorts on it, and asked to give them marks out of five as they watch them.

I'm a big animation fan (this week I am mostly wearing Simpsons and South Park t-shirts, as Jesse would say), but I can't help feeling that the idea of the contest is flawed. Firstly, the animators come from a wide range of backgrounds and budgets: so the McClaren screenings tend to include a lot of student work (mainly from Duncan Of Jordanstone College in Dundee at this screening), which is in competition against the latest glossy stuff from Aardman or the Bolex Brothers, who've had their work shown on TV and can command the money and resources to make their films exactly the way they want. I hope that people are taking the restrictions the student films are working under into consideration when they vote, but we won't know till the results come out at the weekend. The other problem is that funny films (where it's fairly obvious from the audience reaction if they work) are up in competition against the more arty or experimental stuff, and I have a sneaky feeling that arty/experimental will lose out against funny every time, regardless of quality. Of today's selection, the funniest are Bryan Servante's Dust Bugs (two computer-animated dust mites and their search to find God in their mysterious environment) and Sean Elliott's Hammer and Syckle (the story of a feud between two gargoyles, again with some tremendous computer animation). But the best is probably Liana Dognini's One Eye, about two farmers trying to help their handicapped daughter. Drawn in a rough charcoal style, but the eyes of all the characters are done with photographs of real human eyes, and the combined effect is quite haunting. 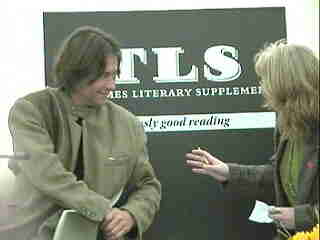 My first Book Festival event features Bruce Robinson, best known for writing and directing Withnail and I as well as doing the screenplays for a number of other movies, The Killing Fields among them. He did a talk earlier on this morning about his new novel, The Peculiar Memories Of Thomas Penman, but this session is primarily concerned with the mechanics of writing screenplays. Virtually his first words to the audience are "I'm completely arseholed," which worry one or two people, notably a very loud snotty man in the audience who demands after fifteen minutes that Robinson stops waffling and tells him how to write a script. To be fair, Robinson is a very entertaining drunk: he isn't so completely out of it that he can't give a lot of useful insights into how his scripts come together. And as should be fairly obvious from Withnail, booze plays a part in the process: "Drinking and writing's a bit like drinking and driving. I love the feeling of being totally wasted and doing sixty in a thirty-mile-per-hour zone... on a typewriter. It's the best there is." Robinson claims the only other stimulant he touches these days is snuff, which comes as a great relief to those of us who were wondering what exactly it was he was shoving up his nose at five minute intervals throughout the talk.

Bruce Robinson comes across as a very nice guy, very self-deprecating: he keeps on saying he's the wrong person to give this talk, as he's written 38 screenplays but only half or dozen or so have made it to the screen. The organisers try to get him to end on a high note by telling prospective writers in the audience how to get their break: unfortunately, he isn't prepared to do that, saying he only got where he is through a couple of lucky breaks, and the current climate in the industry means that those breaks don't come around as frequently as they used to. I don't know if the snotty man got all the information he wanted: Robinson certainly enjoyed him ("where's that acerbic chap, I want him to shout at me again"), but the impression I get is that you can't just set some rules and expect screenplays to magically appear as a result. "All screenplays work to a strict three-act structure. Act One: put a man up a tree. Act Two: throw some rocks at him. Act Three: get him down again. Every single screenplay works to exactly that structure... except for Withnail, which had five acts." See what happens when you don't follow the rules? 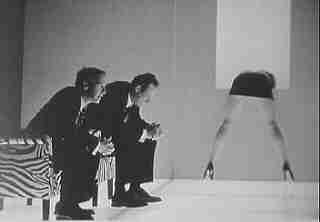 Now I don't want to point any fingers, but Die Ahnlichen was Nick's idea. On the day that the International Festival announces its intention to split even further from the Fringe (possibly even moving to September), we decide to leave the Fringe temporarily and catch some proper serious theatre. And Die Ahnlichen (Lookalikes) certainly has an impressive background: written by Botho Strauss, directed by the internationally acclaimed Peter Stein, performed by Theater In Der Josefstadt from Vienna. We joke beforehand about the limited information available in the Festival programme, and prepare ourselves for two and a half hours of Germanic intensity, performed entirely in German with English surtitles. In fact, it turns out to be nothing of the sort: it's nearly four hours.

The play is basically a series of very loosely connected moral fables: the only real connecting factor is that three women seen in the opening and closing scenes may appear in the bits in between. Or they may not: the cast list isn't too certain on that point. Some sections work (a nastily funny piece about a deformed child sueing her parents for not aborting her when they had the chance), some bits don't (three women waiting in a hotel room for some bloke and the devil turns up instead, or maybe he doesn't). The surtitles don't help, as they're positioned either side of the stage rather than above it, so the audience's heads are constantly moving from side to side like a Wimbledon rally. Cunningly, a character has his heart ripped out with a hook just before the interval, so we all decide to stay for the second half, but to be honest it's all downhill from there. The set design, however, is tremendous. When we meet up afterwards over a cocoa to decide exactly what the message of the play is, the best we can come up with is "big white boxes look really good if you light them from the inside". But the final word has to go to Rob G's comment on an entirely unrelated piece of theatre: "Nick, just because it's not in German, it doesn't mean it has to be good..."

Rachael - The Tattoo was very moving - motorcycling kids were sweet. Lesley refused to laugh at the Fiji soldiers in their skirts. (Lesley flew in from Lapland yesterday afternoon, by the way. We're a pretty cosmopolitan bunch, and no mistake.)

Jon - Saw Atom Egoyan's talk about the film Exotica, accompanied by his regular composer Mychael Danna. Interesting how the music was designed to be in discord with the rest of the film, to stop the audience working out too quickly which way the story was going. Danna had to compose the music before the film was made, so he got to go on the set - if you've seen the film, you know why he enjoyed that!