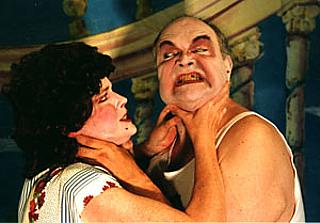 Thursday after returning back from Edinburgh, I visit my reflexologist and she tells me my adrenals appear rundown, too right they are! Anyone who has experienced the rollercoaster ride that is Edinburgh knows the highs and lows of festival going, so what were my highs and lows this year? I think it was Richard Eyre who called theatre the cricket of the performing arts, and there are a lot of nice middle class entertainments in Edinburgh, but one play to come out with a baseball bat and thwack the living daylights out of the audience was Fatboy, my favourite thing at the festival.

"We need theatre to be more than entertainment, with the power to provoke and disturb, enlarge the imagination and enrich the soul, question what stories there are; how they are told; how theatre can grapple with the world", says Rose Fenton of LIFT. Fatboy did all that: taking a swipe at the greed and avarice of nations and individuals in act one, it cleverly spotlighted how that approach devalues us all by not enriching the soul. Some have seen this play as a thinly veiled attack on the United States, and with Bush saying things like "the American way of life is non-negotiable" you can have some sympathy for the Michael Moore viewpoint, but this play is more far reaching than that.  Although in act two we get the court scene, with a self appointed judge and jury, you are left in no doubt who that is aimed at - Guantanamo Bay springs to mind. By act three the play turns to Shakespearian themes, of how Fatboy can never be killed off and the epilogue deconstructs the whole idea. The uncompromising language did undoubtedly alienate some of the audience and the show was only two thirds full on a Sunday. Shows traditionally sell-out at weekends, so it was not playing to full houses and I doubt we will see the play in London, more's the pity.

Of the other shows I saw, the burlesque revival is gathering pace: Old Lag and myself were fortunate to get tickets to see La Clique on the Tuesday, traditionally the quietest day of the week (otherwise it was sold-out all week), and we loved every minute. The form derives from the more risqué acts that used to appear in old time music hall, played to the music of the day: for us rap, hip-hop and everything droll enough in-between. So we had a dominatrix in a pink rubber suit doing sword swallowing, a stripper doing magic tricks and playing flamenco guitar and a host of others. The Spiegeltent and burlesque are made for each other and will be a must see next year.

So what of the lows? I could mention all those awful middle class entertainments I fell asleep in, but why bother. If Ross Noble returns next year please keep the show to the traditional one hour: two and a half hours of any comedian would be wearing, even one as talented as him. Drop the padding, we have other shows to go to! Another disappointment was not getting our morning copies of the Spank Times. [The daily printouts of the website that I've distributed to our flats in previous years, somewhat kiboshed by the death of the Web 13 cybercaff and its handy print facilities - Spank]

And finally when we were in the Filmhouse bar, we had serious discussions about whether we should tell the extremely dignified security lady (who has been there for years) about the demise of Rob D., who was wrongly accused of an unfortunate incident a few years ago. But on balance we decided to let sleeping dogs lie, it would only have upset her. Rob was never the mad dog we made out or the old dog he made out! He was just as dignified as that security lady, and he was missed in Edinburgh. 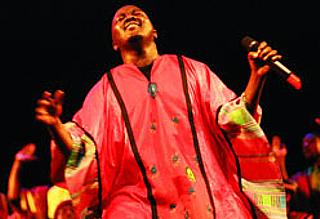 Soweto Gospel Choir - Just absolutely brilliant. Unlike their CD, the concert was unaccompanied, and as such had the purity and excitement of 32 voices. The repertoire included English, Zulu, Xhosa, Sotho and other language songs. The venue, a huge church, gave the choir a huge sound. Just brilliant.

The Andy Warhol Syndrome by Jenny Eclair, with co-writer Julie Balloo. A show about an extrovert local working on a market stall, who has dreams of a more exciting life than predicted for her in a small northern town. A misrouted camera team from the television interviews her on the market stall about losing weight, and a bit part as local colour on television is born. This results in conflict with her husband and family who want her to play the traditional housewife role, and probably resent her new found fame. By means that could only happen in the media, her career falls dramatically apart - death by tabloid. The final ending of this one woman show is very dark and not one that would be contemplated by Hollywood. Well written, dramatised and acted.

Afternoon Teaze by Topping & Butch. An enjoyable but slightly old fashioned show by two old poofters in red leather. Songs accompanied by the electric piano. Full of double entendres and rhymes where you think of a rude word but they do not put it in. Political satire with the Never Mind Song. All served up by the maid and Jo Caulfield with free sherry and shortbread.

Overall summary for 2004 - what a great time. What a feast of theatre. Thanks to all the actors and theatre folk who do this every year for us. A marvellous time. 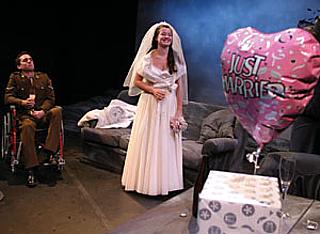 EIFF - Best 3
1.  Coffee and Cigarettes
2.  Far Side of the Moon
3.  Dead Man's Shoes
also worth of mention (in chronological order viewed):  Ramblers, The Big Red One

One liner for each film watched: