A surprisingly quiet train journey up to Edinburgh this year. No, really. Other coaches are filled with drunken hooligans by the shedload: most notable is the table in coach B which contains a bottle of Scotch, a bottle of vodka and a bottle of Coke, and four lads sat round them drinking them in various combinations. But coach A is an oasis of civilisation by comparison. Even when Christine and Rob have their traditional broken bottle fight towards the end of the journey, it's with plastic mineral water bottles, which is a terribly middle-class way to go about it.

We arrive at the Napier halls of residence in good time, do our shopping for essential supplies - hello, Mr Victoria Wine Man - and eventually make it out to the Filmhouse bar. We've arranged to meet the assembled hordes of Film Unlimited there, and throughout the evening many of the old favourites drift in and out: FilmFan, Luce28, Seona, CherylA, KingBoyD, Withnail20, BabyPuppy, Nac1, 7sarah, Moto748, Simon44 and Mrs 44, SpruceMuse, Joaneebluetoes, Gillianmar and possibly even more that I was too pissed to notice. During this session, a solemn exchange of gifts takes place: FilmFan gives me a rare and only slightly gay-looking Battle Royale transparent umbrella, and I give him a Porn Valley High t-shirt.

Aside from the combination of Spank's Pals and Film Unlimited, the Filmhouse bar is as ever buzzing with celebrities and weirdness. Arthur Smith passes through, and sadly confirms we'll be out of town on the day he does his legendary pissed walking tour of Edinburgh (late on Saturday 25th this year, FYI). A number of actresses from the show Kitsch arrive in tight silver hotpants, and predictably FilmFan is onto them like a rat up an aqueduct. (You may start to see where the inspiration for Porn Valley High comes from.) And I eavesdrop on a guy at the bar who claims his actor mate had to audition for the role of one of Jamie Oliver's friends in a Sainsbury's advert "because he doesn't have any real friends". 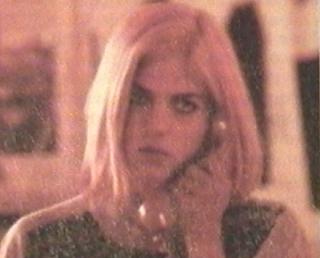 Eventually we waddle down the road to the Cameo for our first proper event of the 2001 festival. It's Storytelling, the new film by Todd Solondz, who's infamous for his dysfunctional family saga Happiness a few years ago. It's divided into two halves, entitled Fiction and Non-Fiction. In Fiction, we see student Selma Blair and her cerebral palsy boyfriend Leo Fitzpatrick come into conflict with their black professor, Robert Wisdom. In Non-Fiction, we follow documentary filmmaker Paul Giamatti as he obsessively records the lives of John Goodman, Julie Hagerty and their three sons in order to make a film about American teenagers post-Columbine.

It's difficult to discuss Storytelling without mentioning its curious history. When Solondz originally filmed it, it was a three-section piece, including a third story featuring Dawson's Creek's James Van Der Beek. This has been completely cut from the finished movie, leaving it at a slightly anorexic 83 minutes long. And of the two remaining sections, Fiction has been cut down until it's little more than an anecdote. Non-Fiction is easily the more satisfying section of the two, but couldn't really be released on its own as a 60 minute feature.

And ultimately it's the imbalance of the two halves that makes Storytelling an interesting failure, but a failure nontheless. Fiction is where all the shock value we associate with Solondz is concentrated into one handy pull-out section, playing with hot topics like disability, racism, sexism and bad literary analysis but not really doing anything with them. It seems totally geared towards the 'money shot' that's been mentioned frequently in the press - won't spoil it for you here if you don't know about it - but dribbles off after that into some slightly amusing self-reflexive criticism from Wisdom's creative writing class. Non-Fiction is a much sharper affair, a social satire of teenage American life that's bolstered by some terrific jokes at the expense of other state-of-the-nation flicks like American Beauty and American Movie. (Nice to see stoner Mike Shrenk from the latter turn up in a minor role here.) As it stands, Storytelling is watchable enough but fatally crippled by its structure: hopefully this isn't just an excuse to make us all buy a Director's Cut DVD of the film next year. 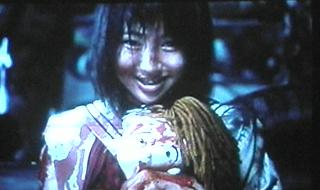 Further late night fun follows with a screening of the aforementioned Battle Royale. By now it's become apparent that the promotional brollies are being handed out to just about everyone, thus seriously devaluing my own. (The Cameo front of house staff make everyone in the auditorium open their umbrellas before the film starts for a picture.) As it's a late night show, free vodka Red Bulls are also available. But in the end, the movie's strong enough to keep us all alert without the aid of energy drinks. The premise is simple: Japan is in turmoil (again), unable to control its rebellious teenagers. So every so often, pour encourager les autres, an entire school class is airlifted out to a remote island, given a weapon each and told they've got three days to kill each other until only one remains.

Battle Royale caused a tremendous stink in Japan when it was initially released in the tail end of 2000: questions being raised by the government, riots in cinemas, and so on. Which means you're closely studying the film for some sort of analysis of the state of Japanese society. To my eyes it doesn't really have one, though that may just be ignorance on my part. (Certainly it would appear that the original novel of Battle Royale had more of a political subtext, being set in an alternative universe where Japan won the Second World War.)

But what you do have here, without a shadow of a doubt, is a cracking setup for an exploitation flick, and veteran director Kinji Fukasaku milks it for everything it's worth. The whole film plays like Hollyoaks with a body count: all the usual teenage fears and anxieties are there, but amplified a hundredfold by the additional pressure to hack your best friend's head off with a machete in order to survive. There's an obvious problem with the story: as an initial class of 42 is whittled down to one (an on-screen scorecard helps you keep track), it's very difficult to get involved with the huge number of characters that are mere cannon fodder. But Fukasaku keeps the whole thing moving along quickly enough to get you from one massacre set-piece to the next.

It'd be impossible to play material like this dead straight, and Battle Royale's outrageous sense of black comedy lifts it above the norm. Much of this comes from our old chum Takeshi Kitano, playing a former teacher of the class who's now cheerfully acting as ringmaster for all this carnage. There's a superbly over-the-top soundtrack (like Wagner scoring a Jerry Bruckheimer film), and a reckless edge to the killings that means you can never take it entirely seriously. A perfect match of timeslot and movie, rounded off by a nightcap with the FU posse in Christie's bar afterwards. (Although when FilmFan told me the details on his mobile, I was convinced it was called Krusty's bar. Hey hey hey!)

Lesley - Storytelling. A two-parter pruned down from three (why? everyone is asking). The first half is a take on sexual attitudes/behaviour in the context of the American creative environment. The second half focusses upon the social attitudes of an affluent Jewish American family. Both slyly bait any niceties of audience political correctness, but without any real originality. The second part held more charm for me than the first, which I found somewhat mind-boggling. Do sexually active adults actually do this stuff?

Nick - Star heckle at the Ross Noble show! For the first time ever, I was sat next to someone who was bathed in the admiration of the people filing out of the show. After fifty-five minutes of a blisteringly funny show, a lot of it deconstructing the art of comedy, the show was losing pace until Chris shouted out "are you Hamlet?" For a split second, Ross had the look of John Prescott being asked to lead the country. Then he seamlessly worked in all the material he had used in the show (spinning sombreros, Star Wars characters, show dog tricks) into the plot of Hamlet. It was a stunning piece of improvisation and all started by Chris - thanks to her!

Lesley - Battle Royale. Loopy. You either like this sort of thing or you don't. I do - a total gorefest, splashing blood everywhere. The disintegration, both moral and physical, of the cutest Japanese teenagers you are likely to come across - the school uniforms! And 'Beat' Takeshi Kitano. Yummy.