People at work have been asking me over the past week if I get some sort of bulk discount for seeing so many shows at Edinburgh. And once I've stopped laughing, I have to explain, well, no: if nothing else, the festivals have got more and more commercial over the years, with prices getting higher to match, and new ways of screwing over punters being invented all the time. The trick, in the end, is to find areas outside of ticket sales where you can economise as much as possible.

And this is still the case this year. Seven of our party of twelve travel up from London to Edinburgh on GNER rail tickets that were pre-booked massively in advance for maximum cheapness. Thankfully the journey shows no signs of that cheapness, apart from the worrying note that the signs in the carriage windows all have 'Edinburgh' spelt incorrectly on them.

From there it's a cab ride to the Napier University halls of residence where we traditionally spend these weeks. Accommodation is notoriously difficult to find, and expensive, at this time of year, so getting this booked is key - I secured these three four-bedroom flats back in February, and even then had to compromise on location a little because all the best ones had already gone. Still, this deal gives each of us a roof over our heads, a bed each and self-catering facilities for around £130 for the week, which is a bargain in anyone's language.

The Belated Birthday Girl and I have done our share of luxury hotel living over the past couple of years, but she always accepts that things are going to be a bit more low-end when we do the Festival. However, I soon find out where she draws the line when we go out to the nearest supermarket to stock up on provisions, and find out that that supermarket is a branch of Lidl. As I scan the shelves looking for breakfast cereal, and find the most edible thing on offer is some sort of Eastern European bootleg version of Weetabix - called Bixoweets or something like that, only available in packs of 72 for around fifty pence - I can't help but notice how horrified she is at what's on offer. We get the basics for the kitchen in the end, but I suspect she'll try to make sure we don't have such a Netto Fabulous lifestyle for the rest of the week.

We get back to the flats to wait for the other five of our party to arrive - Des and Sylvia flying in, Linda coming by a later train, and the Muses driving up as per usual. By six o'clock, we're all in the flats and ready for action. At six thirty, we hit the town - some of the group head straight for the pub (certain nameless ones had already got in an early start there), the rest go to a restaurant that I shall discreetly keep anonymous. Partly because it's probably not their fault that every aspect of the service was wrong in some way or another, partly because a couple of years ago there was a messy incident where the London branch of the same chain tried to have a couple of Spank's Pals arrested. Everyone concerned knows who they are.

But at the end of all this, we're fed and have the start of the week's dangerously high alcohol quota inside us. It's time to do this festival. 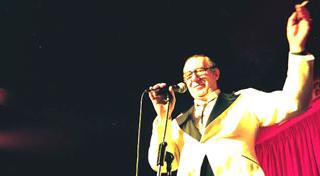 The comedian and comedy club owner Malcolm Hardee died earlier this year, in an incident that definitely involved his boat on the Thames and possibly involved his own dangerously high alcohol consumption. In the twenty of so years I've been a consumer of the British alternative comedy scene, Malcolm has been a fixture on it for me since the start; I used to regularly visit the Comedy Store in the days when it occupied a basement in Leicester Square, and the compere seemed to always be either Hardee or his close mate Arthur Smith. Hardee's jokes were never the greatest on the circuit ("How d'you get a nun pregnant? Fuck 'er"), but it was his sense of mischief and danger that always made him a great compere, and latterly a great club owner.

And as the years went on, I found out more about that sense of mischief and danger, because wherever two or three comedy enthusiasts are gathered there will always be Malcolm Hardee stories. And it turned out that I'd seen him even earlier than those mid-eighties Comedy Store gigs, because he'd been involved in a piece of early 80s telly that had seared its way onto my brain. The 'adult' version of Tiswas, called OTT, made a huge splash on its opening night by featuring cabaret act The Greatest Show On Legs, where Hardee and two collaborators danced on stage, completely naked except for a small number of well-positioned and rapidly deflating balloons. But that was Malcolm for you - always ready to display his legendary genitalia to people at the drop of a hat, although sad to say I never got to see them myself in the flesh.

Hardee was a chancer, an ex-con, a failed criminal. He was a regular fixture at Edinburgh, and wasn't above the old plumber's trick of having all his comedy show titles start with the word 'Aaaaaargh!' so that he'd always be the first thing people see in the Fringe programme. So the tribute show we open our 2005 festival could have no other title: Aaaaaargh! A Tribute To Malcolm Hardee. Compered by Arthur Smith - who else was left? - the show consists of a number of his friends and fellow comics telling their favourite Hardee stories. Sadly, Smith can't persuade the comics to all divulge the information about how much money Hardee owed them when he died - Lee Mack tells a splendid story in the programme about how Hardee offered him a half share in a greyhound as payment for a gig, and it didn't emerge until some time later that at least half a dozen other comics had been offered the same deal with the same greyhound.

And all the stories are along the same lines, as an all-star cast line up to reminisce. Owen O'Neill tells of his first gig at Glastonbury, where Hardee got him literally falling-down drunk on cheap cider before a disastrous set, then offered him a gig at his Greenwich club afterwards. Nick Wilty relates how at one party, fed up with not being the centre of attention, Hardee set fire to a woman's hair, but graciously took it like a man when she burnt all his chest hair off in retaliation. And Chris Lynam, another member of The Greatest Show On Legs, recalls the frontal nudity, fireworks and physical injury that were typically a major part of their shows. Life with Hardee sounds like it could have been bloody dangerous, but you'd be able to dine out for years on the stories afterwards.

Of those stories, Simon Munnery comes off best with a retelling of the anecdote that gave Hardee's autobiography its title, I Stole Freddie Mercury's Birthday Cake - it needs a great storyteller to do it justice, so buy the book or pester Munnery to tell you when you next see him. The visual highlight is a gloriously ramshackle can-can dance, performed by a group of Hardee's favourite women ('his sister, his fiancee, his ex-girlfriend and a couple of Malcolm's working girls,' claims Smith). And the finale is the only one possible, a Greatest Show On Legs reunion with a bloke from the audience filling in for Malcolm on the balloon dance, as none of the guest comics could be persuaded to take their clothes off. I never got to see Hardee's legendary genitalia in the flesh, but the same no longer applies to his colleagues. It's the perfect end to a touching yet hysterical tribute to a man who, for all his dangerous ego, was obviously hugely loved on the comedy circuit. 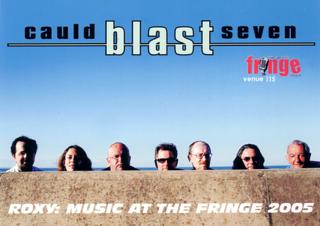 By now, it's 11pm on Saturday night; what are we going to do now? It's a question we were already anticipating five hours earlier, as we rang round every late-night cabaret show in town only to find that they were already sold out. Looking to try an alternative approach, we decided to see what music was available. The Roxy were apparently doing some late night music shows, so we phoned and asked to book tickets. The glum voice at the other end that said 'just turn up and pay on the door, we'll have loads of seats' seems to suggest that Music At The Fringe doesn't seem to be pulling in the punters to the same degree as your typical late-night comedy show. (And one of those typical late-night comedy shows is apparently threatening them with legal action for using the phrase 'late and live' a little too prominently in their publicity.) But it makes for a laid-back alternative to the usual midnight shoutathons you get round here.

The Roxy's plan is to have a rotating series of bands, and have three of them perform separate sets throughout the night starting at ten. We go for the middle set of the evening, featuring Scottish jazz band Cauld Blast 7 - unfortunately, it starts half an hour late, owing to technical problems with the drummer's monitor. (Yeah, like the drummer needs to hear what everyone else is doing.) A seven-piece band with an unusual lineup - sax, clarinet, guitar, bass, drums, cello and a concertina who always surprises you whenever he joins in - they seem to be a modern jazz band and an arty world music outfit roughly soldered together to see what sort of noise they make.

For my money, the straight jazz numbers are a little bland, and the more they push the folk and roots elements of their tunes, the more interesting they get - at one point, a set of traditional Scottish melodies recalls the work of Irish band Moving Hearts in their gleeful mashing up of musical styles. Not brilliant, but very listenable, and despite the delays we get out in perfect time for the night bus home.