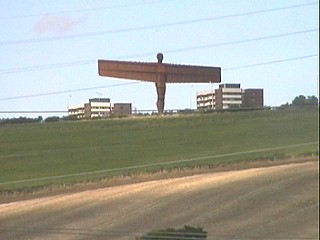 We pass the Angel Of The North at around 2.30pm. This, unfortunately, is not good, as this was meant to be the time when our train was pulling into Edinburgh, and we're still only in Gateshead. Thanks to an overhead line failure, we arrive in town nearly two hours late. Still, the time isn't wasted, as we drink the buffet car dry and solve the Jill Dando murder while waiting to move. (This is Christine's idea, by the way. She thinks Dando's fiancee did it, because we've all seen Jeremy Irons in Dead Ringers and know how evil gynaecologists can be, don't we? Police enquiries to her, not to me, please.)

We arrive at the flat, and it's up to the same high standard as last year. After unpacking and making the traditional trip down to CostCutter for essential supplies (although one or two thought a visit to Thresher was higher priority), we decide to spend a comparatively quiet first evening in the Filmhouse cafe bar. More than ever it seems to be the best location for spotting stars: in the space of a couple of hours we see Neil Pearson positively loving himself at the bar, Susannah Doyle in tow, Bill Forsyth and John Gordon Sinclair sharing a quiet pint, and some bloke from Brookside whose name has escaped us all completely. 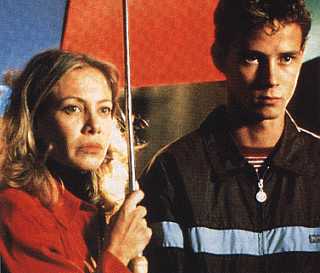 From there, we split between the Pleasance and the Cameo cinema. The Cameo is showing All About My Mother, the new film by Pedro Almodovar. Manuela (Cecilia Roth) has a great relationship with her teenage son Esteban, only marred by her reluctance to acknowledge the existence of his missing father. When Esteban is killed in a car accident while chasing after a famous theatre actress, Manuela returns to her native Barcelona to try to rebuild her life, aided by a circle of women including the famous actress, a pregnant nun and... er... Esteban's father, who's now working as a transsexual prostitute. Well, this is Almodovar.

His touch with female characters is justly renowned, and is well in evidence here, as the few male characters that make any sort of impact here are all in women's clothing (or, in the extreme case of Antonia San Juan, actually played by women). The result is an incredibly sweet and touching film, and although I prefer Almodovar in the full-on melodramatic throes of something like Live Flesh, this will do quite nicely. Now, what's happened to that gay western he was promising us a year or two ago? 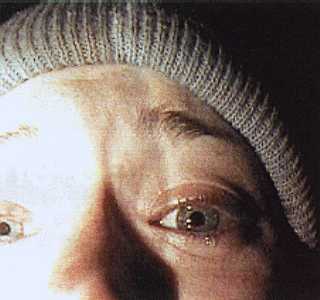 "The Blair Witch Project is so very sold out," says the whiteboard at the Cameo box office. This being the UK premiere of the current US box-office smash, it's hardly surprising. Demand is so great that they end up showing the film in all three screens at once, staggered at ten minute intervals: giving rise to the lovely mental image of a team of crack projectionists ripping the reels off the projector in screen 3 and running round to screen 2 to lace them up again. The story of the film should be familiar by now: three film students (Heather Donahue, Joshua Leonard and Michael Williams) went into a Maryland forest in 1994 to shoot a documentary about a local legend, the Blair Witch, reputedly responsible for a number of deaths and disappearances over the years. The students are never seen again, but a year later their abandoned cameras are found, and the movie consists entirely of the footage they shot before their disappearance. We watch the students as they get more and more lost in the forest, fall out with each other, and slowly go out of their minds as they start to realise they aren't alone.

In Hitchcock's centenary year, you suspect he would have approved of the setup of The Blair Witch Project. From the opening title card, we know something horrible is going to happen to these characters: all we can do is sit there and wait for it to happen. And wait. And wait. Intellectually, you realise that it takes a lot more effort to build a crescendo of impending dread like this, rather than just throw gore at the screen every ten minutes or so: but deep down you do feel cheated by the lack of pure emotional terror on display. Maybe we've all been spoilt by hundreds of cheap shocker flicks and can't appreciate an exercise in pure suspense, but in the end that's all it feels like: an exercise. Nevertheless, Daniel Melnick and Eduardo Sanchez's film is important because it proves that anyone with access to a DV camera and a couple of good ideas can make a movie that can take on Hollywood at its own game. Apologies to the residents of the Lothian Road who may have heard us trying to work on a remake at 2am this morning.

Christine - Otis Lee Crenshaw at the Pleasance. Do not sit on the front row. "Plenty of embarrassment on the front row," he says: and maybe on the fourth too. Didn't know much about him - still don't, but we laughed. I laughed at The Blair Witch Project too: was it funny, or was it nervous tension? Didn't find it scary. The woods have now got a bad press, which cannot be right. Hated the woman - all that screaming all the time doesn't create a tense atmosphere, and I also found that aspect a bit of sexual stereotyping. Final verdict: it was all right for a first Edinburgh night.

Nick - Could The Blair Witch Project possibly be as good as it has been trailed to be? No. It mentions possibly the best horror movie ever made - Deliverance - and then just occasionally matches that film for suspense and tension. It supposedly cost $35,000 to make when it was shown at the Sundance Festival, and then production house Artifice spent another supposed $200,000 on post production work, mainly on the soundtrack. Heading up the strengths of the film, the original wobbly camerawork is used to terrific effect in disorienting the audience, and the reworked soundtrack of scampering footsteps and ghostly squeals in the dark foreboding forest add to the effect. Not an overall effect that will be easily duplicated, as some of the bigger studios seem to think. The strengths of the film seem to come from the budgetary constraints, dictated by filming on the run over three days of shooting and the lack of professional movie making equipment. If it had had little advance publicity, it would have quickly gathered a word of mouth audience, so it possibly deserves its huge success.

Lesley - All About My Mother. As his last film, this one is beautifully cast, sumptuous colour, gorgeous staging. The film engaged my mind fully, my soul a little - the rehearsal of the Lorca at the end - but my emotions - not really. My interpretation of the film was too symbolic for any anguish or (there's another word but I can't think of it right now). Still a 'do go see'. The Blair Witch Project? Don't ask, ask someone else.

Old Lag - CostCutter 24 Hour Supermarket. Bijou little supermarket between the massage parlour and the drinking den. Good prices (can of Tartan 89p) but boycotted by Rob because of their use of child labour.