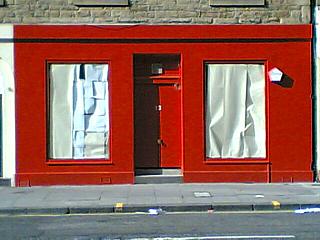 There's an old Private Eye cartoon that I've cherished for some time now. It features the Daleks, nemesis of Doctor Who and scourge of the known galaxy. A group of them are standing at the bottom of a flight of stairs, and one of them is saying, "well, this buggers our plans to conquer the universe."

Anyway, all nine of us - The Belated Birthday Girl, Nick, Old Lag, Grizelda, Diane, Rose, Charmian, Eve and yours truly - arrive in Edinburgh after an uneventful journey. After unpacking, we head out onto the Lothian Road to pick up essential supplies. It's surprising how much the area has changed in the two years since I was last here. The various cheapo 24 hour supermarkets are under threat from a new Sainsburys Local. The notorious Burke and Hare strip joint has been tarted up in an astonishing fashion, like it's been on a Changing Rooms Titty Bar Special. And... Web 13 has closed down. Edinburgh's leading proper internet cafe, the one place I knew for certain I could use to upload my daily reports to you, has its windows papered over and its door padlocked.

Well, this buggers my plans to conquer the universe.

At the time of writing, I still haven't found an alternative web cafe yet, though I've had a couple of suggestions from friendly locals. So if this is appearing late, that's why. The worst case scenario is that I can't find anywhere to post this from until I get back to London. Can I find a new web caff in time? Ooh, the suspense! (Admittedly, the suspense is diluted because I'll have resolved the problem by the time you read this, but you know what I mean.) 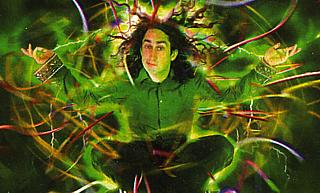 Our first event of the year involves Ross Noble, who's reached that point in his career where he's too big to be doing the traditional 21 night stand at the Fringe. Instead, he's only here for a week, performing in the distinctly non-Fringe environment of the Edinburgh International Conference Centre. It's a soulless 1200 seat cavern, where the only bar is a converted function room five floors down from the auditorium. But as it's a conference centre, all the seats are stupidly comfy ("don't drift off," warns Noble) and come with a fold-out table for taking notes.

That's the sort of minor detail that sets Noble off, of course. And there's a danger that his approach is starting to turn into a predictable formula, like Otis Lee Crenshaw before him. As ever, after an intro film (yay! Funny monkeys!), he starts off bantering with the front row (luckily, three people there have similar outrageous knitwear), then moves on to silly digressions about harnessing the power of ADD children to run transport, or the sad lack of Muslim women's brass bands.

The switches between scripted and impro material aren't as seamless as they used to be, and even though the show's pretty funny overall, I wonder if he'd be better off just busking the whole thing. Particularly as the best bit is an encore Q&A session. Noble takes anything the audience can throw at him and runs with it, including Metro's campaign to have him banned from the Fringe because he's done television shows and is therefore too big. "Metro, eh? I'll have to rip the piss out of them next time I'm on telly." 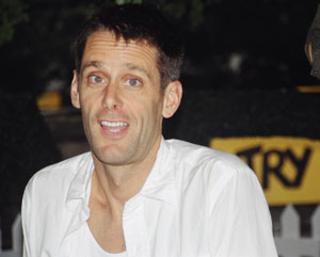 Still, Metro may have a point about the commercialisation of the Fringe. And it's illustrated by the contrast between Noble's plush show at the EICC, and Scott Capurro kicking it old style at the Pleasance. The walk between the two venues, taking in the Bacchanalian frenzy of Cowgate at 11pm on a Saturday night, almost acts as some sort of symbolic decompression chamber. Which is needed, because whereas Noble is desperate not to offend anyone (apologising to a Christian in the front row and to all parents of ADD children), Capurro is the sort of comic for whom the line "and then he shat all over my dick" is the middle of a story, rather than the punchline.

Last time I saw Capurro, it was in the combatative atmosphere of Late And Live, and his set became a running battle between himself and the pissed-up audience as to who could be the most offensive. (He won, naturally.) It makes a pleasant change to see him in the company of people who want to hear what he has to say, but he still can't stop pushing those buttons anyway: I can't believe there's anyone out there who wouldn't feel queasy about part of his set. For my money, the Catholic guilt kicked in during a routine on S&M sex in which he insisted "Christ only died on the cross because he couldn't remember his safe word." Your mileage may vary.

Still, if Capurro was just about grossing people out, this would be a very dull show. And it isn't. Sure, most of the material's about sex, both gay and hetero, even though Capurro admits he's never seen a clitoris: "I'm gay and was born Caesarian." He gets a lot of material from some couples in the front row, most of whom seem to have met on the internet. But he gets a long-term breeder couple to propose to each other, which almost justifies his publicity's bizarre claim that he's "a Canadian Dale Winton". All this is done with high speed but effortless laid-back control, leading one heckler to accuse him of being a cokehead. I wouldn't know about that, but he's very funny.

The Belated Birthday Girl - Two very different, but equally funny, standup shows, linked by pubic hair and Stephen Hawking (you'll have to see the shows to find out more). First, Ross Noble at the EICC. I've been a fan of Noble since first seeing him here two years ago. What I love about him is the way he has only a small core of prepared material, and the bulk of the show somehow gets invented on the spot, inspired by some little thing about someone in the audience. Although it has now got to the stage where I can see this loose "structure" - the joke he doesn't get to quite finish until the end of the show, as he gets sidetracked each time he starts - the inventiveness of that sidetracking and the sheer bizarre nature of some of what comes out of his head keeps me coming back for more. It isn't to everyone's taste though - I overheard two lads complaining to each other during the interval that "he hasn't really done any material yet" - but to me he's one of the best standups around, and always worth watching. Although I think it would have been fun to see him at one of the remote venues he mentioned in the show, rather than the comfortable but soulless EICC (which didn't have a proper bar, and had people guarding the basement area where the makeshift bar had been set up to stop you taking drinks out).

Old Lag - A big show for a big comedian. Ross Noble has built up his venue size over the years to two evening concerts of 1200 people each. It is no mean feat to have such a large crowd chortling their way through two and a half hours. I did think that some of his set piece punchlines, which should have reached a crescendo of audience appreciation, did not do so. Also, a shorter show for less money would have been better.

The Belated Birthday Girl - On to Scott Capurro at the Pleasance. He has about as much in common with Ross Noble as the Pleasance has with the EICC, but was at least as funny on the night (to be honest, I certainly laughed more at Capurro). His style is much more to bait his audience, particularly sexually, seeing what boundaries he can crash through. Although there were several walkouts, I think they had more to do with the late hour than offending people (though I could be wrong - I didn't ask them). He's only doing the Friday and Saturday nights as standup, as he's got his play Loaded this year which I'm keen to see. But if you're around next Friday and Saturday and are not easily offended, I'd recommend catching him.