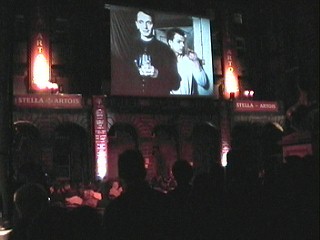 Reading Irvine Welsh's Filth on the train up to Edinburgh, I make a mental note not to mess with the local constabulary under any circumstances. Especially the racist misogynist coked-up Masonic ones with sentient tapeworms up their arses.

All the stories my former colleague Jonathan told me about GNER turn out to be complete lies, as six of us (Nick, Ken, Rob G, Rachael, Sylvia and yours truly) travel to Edinburgh on one of their trains, and it arrives on time with none of us suffering from food poisoning or anything. I immediately assume the role of head guide due to the wide experience of the city I've accumulated over seven previous Festivals, and then proceed to get us hopelessly lost walking from the station to the student self-catering flats we've rented for the week. Eventually we get there, unpack, and nip over to the local FarmFoods supermarket to stock up on essential supplies for the week. Not quite sure what sort of farm is being referred to here: it's obviously the sort of farm which is capable of supplying tea and red cola, but not butter.

We meet up with Liz in the Filmhouse cafe bar (she's been here since yesterday) and scoff some of their yummy food before heading off to the City Chambers, which are being used as an open air screening venue for one of the Stella Artois sponsored movie nights. (With a brief detour on the way to pick up Jon, who's using this week as the second half of a general trip round Scotland, and has just trained it in from darkest Inverness: he decides an early night may be a better option.) 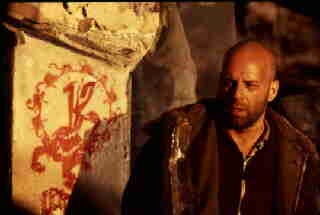 The film is Twelve Monkeys, one of three Terry Gilliam films on display in the Stella season as part of a tribute to the great man, who's in town later this week to plug Fear And Loathing In Las Vegas in the Film Festival. It becomes apparent that the conditions aren't ideal. The City Chambers open out directly onto the High Street at the back, and although they've closed the street to traffic you still get the noise of street entertainers, generator lorries and the common-or-garden Saturday night drunks. This combined with the unfriendly acoustics of the venue means you have to kick your way close to the front to have any chance of hearing the dialogue (and if you subscribe to the theory that Gilliam is a visual director to the exclusion of everything else, try watching the first half hour of this film without words like I did). Even when I position myself in a prime audio hotspot, there's then the small problem of the temperature dropping to liquid nitrogen levels halfway through the movie. And the icy wind blowing across the screen, sending ripples across it and thus making everyone and everything look like they're experiencing some sort of queasy but pointless expensive computer morphing effect every couple of minutes. Twelve Monkeys is still a great film, but I must watch it again on video in a warm room with proper sound next time.

Despite the temptation of the pubs still being open when the film finished at half eleven, we head off back to the flat for a nice warm cup of tea, just in time to hear the minor armageddon that is the fireworks display at the end of the Saturday night performance of the Tattoo. The real work begins tomorrow...

Spank's Pals are a bit too tired this morning to come up with any useful comments (apart from London-born Rob G's "don't forget your jumpers"), but they promise to say hello tomorrow.