"RIGHT!" roars Jerry Sadowitz, as he slices open a new deck of cards with a Stanley knife. "Which one of you FUCKERS is Nick?" It would be a terrific opening if it was true. As it is, what happens during our second attempt at seeing his More Card Tricks And Close-Up Magic show is even more bizarre than that.

We check out of our flats at 10am as requested, drop off our bags in Waverley left luggage, and then phone up the Underbelly to make sure the show hasn't been cancelled like it was last Thursday. "As far as we know, he'll be there," they say at the box office. We arrive at the venue to see Sadowitz by the fag machine fiddling with the contents of his pockets (presumably doing magician-type setting-up things?), and then walking out of the venue bar. Pleased to see that he's at least showed up today, we get in the queue.

Fifteen minutes later, one of the Underbelly staff announces to the queue that Sadowitz will not be performing today. Ever the diplomat, Nick asks her out loud how this can be when we've already seen him in the building (a detail I suspect only the Pals were aware of, which came as news to the rest of the people in the queue). It turns out that when we saw him fiddling with his pockets and walking out of the bar, this was in fact him packing up and leaving the Underbelly without telling anyone.

And yet, I'm not particularly angry or irritated about this as I'm waiting in the box office queue for a refund: all I can think is, "well, at least I can get another three paragraphs for the diary out of this. Four, if you count this one."

So the first show of the day eventually turns out to be The Complete Lost Works Of Samuel Beckett As Found In An Envelope (Partially Burned) In A Dustbin In Paris Labeled 'Never To Be Performed. Never. Ever. EVER. Or I'll Sue! I'LL SUE FROM THE GRAVE!!!' (or TCLWOSBAFIAEPBIADIPLNTBPNEEOISISFTG for short). It takes a similar approach to that of the Reduced Shakespeare Company: three Americans take the piss out of a British playwright for an hour, and make an audience feel smugly proud of themselves for picking up all the references.

The Reduced Shakespeare Company annoyed the living hell out of me when I saw them doing their Complete Works Of Shakespeare (Abridged) show, but this one seems somehow more acceptable. Maybe it's because they're parodying Beckett's style rather than the individual plays, so you don't need to know them inside out to get the jokes, just be vaguely aware of the sort of theatrical experimentation he indulged in. It only takes a little push to make absurdist theatre look totally ridiculous, and in the highspot of the show - a piece called If that gradually becomes utter torture for the audience - the line is crossed splendidly. We also get an early Beckett puppet piece (Happy Happy Bunny Meets Sad Sad Owl), lots of impassioned acting in single spotlights, and a nifty running gag involving Beckett's lawyers sending a torrent of Cease And Desist orders by fax to the show during its performance. A nice light bit of fun for after a heavy lunch (at the Mussel Inn on Rose Street, if you're interested). 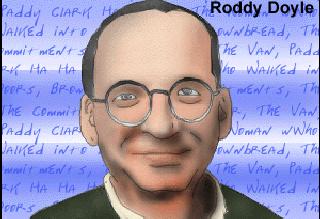 And to finish off for the year, back to the tented village that is the Book Festival on Charlotte Square - it's delightful to discover that among all these tents is one announcing itself as the Author's Yurt. Today's yurt-inhabitant is Roddy Doyle, who gives us a bit of an exclusive: a newish short story featuring Jimmy Rabbette from The Commitments. The Deportees was written in monthly chapters for a Dublin magazine, and this reading is the first time it's ever been heard all in one go. The story is Doyle's attempt at covering the increasingly multi-cultural nature of Ireland nowadays. Several years after he put together The Commitments only to watch the band implode, Jimmy is now a middle-aged man with a wife and kids. He's still got the love for music that he always had, and starts thinking about how great it would be to have another band. Starting with an advert in Hot Press that almost ends with the line "no white Irish need apply", he's soon assembled a band of immigrants from all over the place, and uses them in his plan to bring the songs of Woody Guthrie to a wider audience. Will he be more successful than last time?

To be honest this isn't much more than a light-hearted rewrite of The Commitments, but it's a very entertaining one. Doyle admits in the post-reading Q&A that he feels closer to Jimmy than most of his other characters, because of their shared attitudes to parenthood. But the other characters in the band are equally well-drawn, and the whole thing bowls along quite nicely to a big feelgood finale. Doyle also talks a little bit about his next work, a memoir of his parents which he wanted to write "because I've never really listened to them before".

And that's it for the 2002 Festival. The BBG and I meet up with some of the Film Unlimited crew at the Filmhouse for a beer, and then catch up with the Pals at Edinburgh airport for another beer. They all go off on the plane to Gatwick, while we get a later one to Luton. The easyJet flight to Luton is delayed for an hour, and by the time we arrive there are no more trains to London, so we have to catch a bus to Baker Street and a taxi the rest of the way, and the taxi costs about as much as the plane did, and we don't get home till about 1.45 on Sunday morning, so Stelios can shove his planes up his arse in future, frankly.

But we're home now. A good Festival, overall - I can't actually say that anything I watched this year was bad, and there were a couple of moments of utter fabulousness. As ever, thanks to all of the Pals for their companionship, contributions and cuddling (well, that last one doesn't apply to all of them, obviously). The two-years-on-one-year-off rule that I tend to do Edinburgh by means that I'm not planning another one of these till 2004. Maybe I'll finally come good on those promises of doing Glastonbury next year? Hopefully I'll be safe around all those people abusing substances, and won't end up being stuck to a wall with Blu-Tack. Being a monkey, and all.

Follow the Postscript link below for a final round-up from the Pals, featuring all the stuff they didn't have time to review this week, and their choices of best and worst events of the Festival.