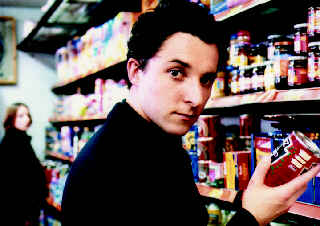 "Wot, no final Edinburgh update today? And I came into an internet cafe this evening especially, and everything!" (CherylA, email received 25/08/2001 18:42)

"Are you people boozed up? Too long at the Oddbins? It is Sat. 9:20 pm EST and your American fans are wondering whatever happened to the Friday reviews. I guess you will phone them in from your office under a shrub in Princes St. Gardens." (Carole Shields, email received 26/08/2001 02:38)

Cheryl, meet Carole. Carole, meet Cheryl. You probably haven't got that much in common, apart from a shared perception THAT I'M SOME SORT OF BASTARD ROBOT OR SOMETHING.

This morning's the usual mad rush to pack up everything and vacate our Napier flats by 10am (hence the delay in getting the previous day's reviews out, since you asked). From there it's a taxi hop to Waverley station to drop off the luggage, leaving us five hours or so to catch a final couple of shows. I decide to stay in the vicinity of the Pleasance for the day, and my first show there's Static, a short play by Chris Thorpe that picked up a Fringe First award when it first played here last year.

Static is theatre stripped down to the absolute bare bones. A man (Jon Spooner) and a woman (Clare Duffy) stand side by side on an empty stage. He talks about coming home from work and dealing with the petty irritations of his existence: she describes her life in an unnamed country as she's captured by soldiers. Over the space of forty minutes, a tiny connection is made between the two of them. It's a beautifully crafted piece of writing, which manages to overcome the odd moment of uncertainty in the performances. In a climate where theatre can occasionally be overloaded by visual effects, it's nice to be reminded of the power of the word. 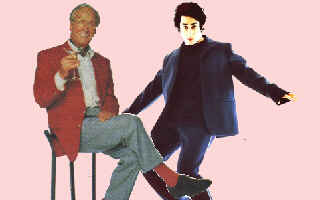 It's always good to have a big finish to a week in Edinburgh: so when the one-off pairing of Ross Noble and Nicholas Parsons was announced on Friday, I managed to persuade most of the Pals to book for it. Except the tickets are timed for a 01:30 performance rather than the advertised 13:30, leading to much confusion as to whether this event is going to take place before we leave Edinburgh or not. Happily, it does.

It's basically a special edition of the daily chat show that Parsons has been hosting at the Pleasance this Fringe, inspired by the way he got on so well with Noble when he was a guest. For an hour, representatives of two great British comic traditions - Parsons with his music hall background preceding his TV star days, Noble from the contemporary stand-up and impov circuit - gleefully shoot the breeze about everything and nothing, to the obvious delight of the audience. Noble's just come from the Reading Festival, where he's been trying to perform while Run DMC give it some welly on the adjacent stage. "That hip-hop thing where they go, 'When I say hey, you say ho! Hey! Ho! Hey! Ho!' - I was thinking of adapting that to 'When I say morning, you say vicar! Morning! Vicar! Morning! Vicar!'" Meanwhile, Parsons is starting to worry that the Smarties he's handing out for the best audience heckles are possibly infringing the Nestlé boycott.

But the climactic moment of magic - and it's always good to have one during your final show - comes fifteen minutes or so before the end. SeaPea and Nick leave a little early to try and get a meal before boarding the train. Just after they go, someone in the audience asks Noble about the downside of the Festival. "The drunken heckles can be a bit dull," he confesses, "though I like the weird ones. Just the other day..." And he proceeds to tell the story of SeaPea accusing him of being Hamlet at last Saturday's gig.

I turn to Old Lag at the end of the show and say, "you know, she won't believe us when we tell her he said that." And you know what? She doesn't. 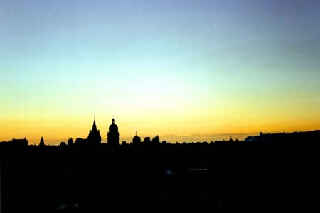 So at the end of all this excitement we get the train from Edinburgh to London, which passes without incident.

Apart from the three precocious little brats who try to steal our reserved seats. "We don't mind you having them after Berwick," says one of the thieving wee shites.

And Rob's theory that Scotsmen get harder and harder as you go further north, until by the time you get to Orkney they're so hard as to be perfectly tranquil Zen masters, even though they could beat you senseless with a pair of cabers tied together and used as giant nunchakas.

And the discussion about GNER's toasties: as they're pre-toasted and heated up in a microwave, shouldn't they be called microwavies instead?

And the way the disabled aid alarm in the toilets goes off every few minutes until the guard has to yell over the PA that the button at foot level does not turn on the water.

And the point when SeaPea tells Rob "you're being very loud today", and Lesley replies "that's only because you're listening to him for once."

And the look of sheer horror on the faces of the buffet staff when we pass four empty wine bottles on to them for disposal.

And the announcement from the guard apologising for any inconvenience caused by the people smoking marijuana in coach B.

And whatever it was that held up the train so much that we got into King's Cross almost an hour late. (Not more than an hour though, because that way they'd have to pay some compensation.)

Despite all this, we're all safely back home now. And though there are some incidents over which a discreet veil must be drawn - the mysterious giggle from a bedroom in the middle of the night: the Tracey Emin-style art installation involving half a dozen empty wine bottles: the way one of the Pals was barred for life from an Edinburgh hostelry, except they barred the wrong one of us - nevertheless, I hope we'll all be up for doing this again in 2002. And I hope I'll be capable of writing it all up for you. And I'll still probably be getting snotty emails from people complaining that I haven't done my full 1500 words by 10am every morning. Give me a break, girls! I'm only human. Being a monkey, and all.

Old Lag - Resident Alien is a one man stage show of Quentin Crisp in his nineties, his philosophy and wit. Bette Bourne was old enough to be a good portrait of Quentin at the end of his life. Living a day in his infamously untidy Manhattan flat, his activities are punctuated with anecdotes, wisdom, ideas and personal history. Key to these musings is Quentin's view of personal style. He dismisses the argument of a woman that she "cannot afford style": he argues that the style is something that is stripped down to basic personality. The observer is left to believe that it's his style that allowed his difficult move through life as an effeminate man. Lots of interesting views and humour: a very enjoyable show.

Old Lag - The Getaway Bus. A one man show in a new venue, the Drawing Room at the Assembly Rooms. The Fringe programme describes it as a lad from Leeds, dragged to Australia by parents, desperate to escape the outback backwaters, resorts to public transport, amateur dramatics, and murder. And it is what it says on the tin! The many and diverse parts of the story are ably told in a straightforward way resembling a cosy radio play.

Old Lag - Martin Beaumont's new play for Wisepart Productions, White Van Man is a euphemism for a working class man working and wheeling and dealing for himself (vans are rarely any other colour). The Sun newspaper has a 'man in the white van' column, suggesting the views of this supposed group of people. The one man show was a day in the life of one, and how he coped, and something of his philosophy of life. The main thread though, as his white van was manoeuvred round the stage, was his gags which went down very well with the audience.

Old Lag - Nicholas Parsons and Ross Noble did a one-off show on our last afternoon in Edinburgh. Afternoon was a question, as while drinking the previous evening Spank became convinced that it was at 1:30 at night rather than 1:30 in the afternoon, so we would not be able to go. This proved not to be the case, so for some this was the last event before boarding the train for London. Ross is a very funny new comedian, and you wonder if Nicholas Parsons has done more in entertainment than the smoothie host. [He sure has: try this link for details - Spank] Both had been on Radio 4's Just A Minute, though only a handful of the audience admitted listening to it, so maybe a new audience awaits? The show was just a humorous chat that overran to an hour and a half. Ross Noble mentioned the heckle SeaPea had put in earlier in the week, but she had sneaked out for lunch so did not hear it.

Old Lag - Stiff by Spymonkey. A hugely funny physical theatre piece that was a hit at last year's Festival. Masses of theatrical business. All the funny things going on in a funeral parlour. Some of it was just acting business for the sake of it, so perhaps they could have made more of the humour of death. There were some fantastically clever effects, but foolishly they gave some of them away, destroying the magic. Nevertheless, a great show.

Old Lag - I was surprised by How To Lose Friends And Irritate People because it was at the Gilded Balloon, but turned out to be an amateur show. I was prepared to feel embarrassed and leave early, particularly as I was probably the oldest person in the audience. The show people and the audience were school children and just above. In the end it turned out to be very funny, with an excellent ending scene and good live music.