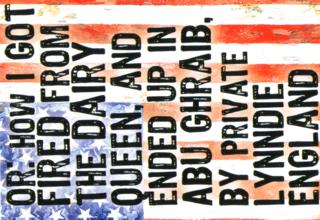 Brothers and sisters, I want you to get down on your knees and praise the Lord for the healing power of the Traverse Theatre's sausage baguettes. It's roughly the same situation as last year: we get in late on Friday night, we have to vacate the flats by 10am on Saturday morning, and the first decent food that passes our lips that morning is the porky goodness in a loaf (or vegetarian equivalent as required) supplied by the Traverse cafe bar. One of those down your neck, and all signs of a hangover instantly vanish. Those issues I had with the Traverse catering last Thursday are now entirely resolved, though I appreciate the anonymous message of support I've received from a reader who says they had a similar problem with a cup of cocoa at the NFT.

In fact, we end up having those healing baguettes after a play at the theatre, My Pyramids, written by Judith Thompson and starring Waneta Storms as Private Lynndie England. In the forty-minute monologue, England reflects on the fame she's accumulated this year ever since those pictures of her abusing Iraqi prisoners of war started circulating. She talks about her life before joining the army, the struggle she had as a woman to make it in a man's world, and how she sees nothing wrong with what she did: "I never have, and never will, laugh at a man's willy. But these were not men." Creepily, England's main defence is that what she did was nothing compared to the other acts that took place at Abu Ghraib, and that all the hatred the world has heaped upon her is down to one second that happened to be captured on film. "How would you like it if you were judged by your worst second of the year?"

My Pyramids doesn't attempt to be a historical document: instead, it takes the few images and facts about England that we know, and attempts to extrapolate both motives and history from them. It's the same thing that history plays have been doing for centuries, except in this case we're talking about events that only took place about a year ago, which somehow seems problematic though I'm not quite sure why. Those quibbles aside, it's an interesting piece of work that attempts to present England as a human being rather than that small collection of facts and images, helped greatly by Storms' fine performance. 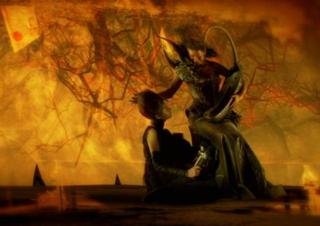 From there it's on to our last film of the Festival, Mirrormask - a fantasy flick by the comics dream team of artist Dave McKean (who designs and directs here) and writer Neil Gaiman. It's the story of young Helena (Stephanie Leonidas), whose typical teenage angst is made worse by her living conditions - her parents (Gina McKee and Rob Brydon) run a circus, which Helena is getting fed up of, to the extent that she wants to run away from it and join real life. During one family argument, Helena casually wishes her mother dead: barely a few minutes later, mum collapses and is rushed to hospital in a critical condition. During a sleepless night just before her mum's operation, Helena finds herself in a curiously familiar fantasy world, and has to go on a quest to save a curiously familiar queen.

McKean made a short film a couple of years ago called [N]eon. It was ravishing to look at, featuring his typical imagery that's been digitally hammered to within an inch of its life; but crucially, it was somewhat low on plot, meaning it was unlikely to be seen outside of a festival or arthouse environment. Mirrormask is a more obviously commercial affair, produced in association with the Jim Henson Company and more obviously aimed at children. The main difference here is the presence of a gifted writer. Gaiman would be the first to admit that his quest story through a fantasy land with vague connections to the real world has countless predecessors that have obviously influenced it. But he ensures there's a sharp post-modern wit running all the way through his script. Helena is smart enough to realise she's in a dream world quite early on, but importantly it's a dream world with clearly defined rules. There are no suddenly introduced fantastic elements that are just there to solve a story problem: there's very precise logic to everything that happens here, no matter how unusual it may be. It's also a rare example of a Gaiman story that builds to a genuine climax, rather than the dying fall that Sandman readers got so used to over the years.

Kids will enjoy the quest story, but for adult viewers, the key pleasures of the movie are mainly visual, and it's here that McKean's skills come to the fore. There have been several movies recently that have been set against an almost entirely CGI backdrop - Sky Captain And The World Of Tomorrow and the Japanese Casshern for example. I've omitted Sin City from that list because it doesn't fit my argument, which is this: far too often, filmmakers use the freedom of CGI to create a world entirely overloaded with visual imagery, until the audience's eyes simply give out under the strain. Mirrormask, like Sin City, has a visual artist at the helm, and both McKean and Frank Miller realise the importance of light and shade - of flooding your field of vision when the story requires it, and stripping things down to the bare minimum when the story requires that too. There are images in this movie that will have your jaw scraping the cinema floor, but they're always in service to the narrative. Gaiman and McKean have been great collaborators for the last two decades, but I think Mirrormask may well be the best showcase of their combined strengths to date. Plus it shares the Best Last Line award for this Film Festival with Serenity. 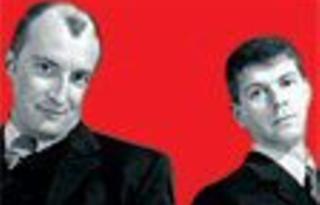 Our final event of the Fringe is a curiously retro affair, held in the unfamiliar surroundings of Edinburgh Academy. Tomfoolery is a celebration of the sixties satirical songwriter Tom Lehrer, assembled in the early eighties by Robin Ray and Cameron Mackintosh for a very successful run in London's glittering but urine-soaked West End. This Edinburgh production is a bit of an Eighties revival in its own right, featuring Dillie Keane (ex-Fascinating Aida) with Kit Hesketh-Harvey and The Widow (still of Kit And The Widow), all of whom are throwbacks to the days when musical comedy was still a major element of the Fringe. The fourth member of the team is token twentysomething Matthew Wolfenden, whose comparative youth gives the rest of the team an excuse to clarify some of the more dated references. (For example, Lehrer's reason for retiring in the seventies - he claimed satire died the day Henry Kissinger was given the Nobel Peace Prize - is explained in terms of Donald Rumsfeld being lauded for bringing peace to Iraq.)

It's a cleverly chosen ensemble. Dillie Keane has grown old disgracefully, and is relishing the freedom to hurl herself around the stage with pornographic abandon during Smut. Kit and The Widow provide the musical backbone to the show, as well as a welcome edge of theatrical campery that wasn't in Lehrer's originals. Matthew Wolfenden provides West End musical gloss and youth, two qualities that the other three performers love to ridicule at every possible opportunity. The songs thrive wonderfully in this environment, with occasional tweaks for location (New Math has its obvious grammatical error corrected) or topicality (We Will All Go Together When We Go has its reference to 'French Fries' replaced by 'Freedom Fries'). The show still feels like a bit of a nostalgic indulgence in this day and age, but at this stage in the Festival I think we're entitled to some indulgence.

And apart from the traditional fun and games on the Easyjet flight home (it touches down on time, but they have to turn off all the power on the plane before we can disembark), that's the end of Edinburgh 2005 for us. There aren't any obvious standout highlights for me this year, but a lot of very good shows worth mentioning in dispatches. Of the films - and I appreciate that this is a viewpoint that horrifies The Belated Birthday Girl - both Serenity and Mirrormask rank equally high in my estimation, both of them standard genre stories raised to higher levels by the unmistakable touch of their creators. Having said that, my favourite individual film this year may well have been The JCB Song in the Mirrorball Animation programme. Theatrically, both East Coast Chicken Supper and Yesterday Was A Weird Day stand head and shoulders above everything else. Gamarjobat were the funniest act, while The Ukulele Orchestra Of Great Britain and Michael Franti were the best musically. But Arthur Smith's Swan Lake is probably the one show worth mentioning above all others, probably because it couldn't have taken place anywhere else other than Edinburgh during Festival time.

It almost makes me sad that I won't be there next year. But you know the rules: two years on, one year off, meaning that my next visit will be in 2007. I already have tentative plans for what we'll be doing as a replacement in Summer 2006. However, I don't intend to start banging the drum about those plans just yet. Being a monkey, and all.

Their final thoughts on the Festival can be found in Spank's Pals' Postscript.