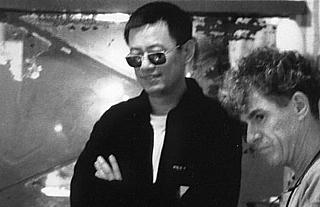 I am, in the words of respected senior police officer Roger Murtaugh, getting too old for this shit. Specifically, getting into bed at 5am this morning, only to get out again at 8.30 to co-ordinate the Pals so we can be out of the flats by our 10am deadline. The Belated Birthday Girl and I try to revive ourselves with sausage baguettes at the Traverse cafe, but it doesn't really help. Luckily, our first event of the day involves someone who appears to be just as tired and hungover as we are. Cinematographer Christopher Doyle is a last minute addition to the Film Festival programme, and despite this interview only having been announced on Tuesday, it's already sold out.

Doyle is notorious for his, um, artistic lifestyle: he attended last night's party for Zhang Yimou's Hero (which he shot), then apparently went on to at least one other one elsewhere in town, and rumour has it that his hotel bed is still untouched. He has a bucket full of bottles of Tiger beer by the side of his seat today, while interviewer Shane Danielson sips nervously from a large Coke. For the first twenty minutes or so, Doyle's loose living appears to be having a detrimental effect on the interview: he and Danielson indulge themselves in rambling banter about the previous night's party, and look at some experimental shorts Doyle has constructed out of his old footage. (He comes up with a great line about installation art being "just bad movies played slowly", but his own film art doesn't seem much better than that.)

But gradually, as the interview opens up to the audience, Doyle starts seriously analysing the methods he uses when working with directors like Wong Kar-Wai. His theory is, it's not enough just to be an observer: to be a good cinematographer you have to engage, first with your collaborators, and then with the space you're shooting. He takes several questions from the audience, and always gives generous and thoughtful answers. He talks about the current popularity of shooting on digital, and admits that it won't be truly accepted as a format until people stop automatically comparing it with film. Best of all, he shows us a quick montage of shots from Wong Kar-Wai's 2046, which annoys Festival director Danielson immensely: 2046 was going to be the Festival's closing gala on Sunday, until Wong withdrew it at the last minute for further reshoots and editing. (Doyle drops interesting hints about a possible fallout with Wong over his working methods, but discreetly declines to elaborate.) All in all, it's a very informative and entertaining 90 minutes: Doyle may look as mad as a box of frogs from a distance, but it's clear he knows exactly what he's doing. 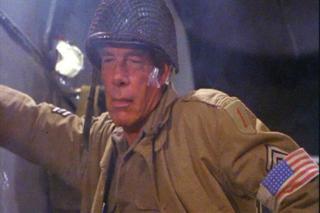 I was in the same room as legendary film director Sam Fuller twelve years ago: in this very city, in fact. BBC2's Late Show brought him over for the Festival in 1992 for a one-off performance, in which he pitched one of his unfilmed movie ideas to a small audience, which I was part of. I'm ashamed to admit that I couldn't tell you anything now about the story he pitched, but it was obvious he was a proper Movie Guy of the old school. Up until his death in 1997, Fuller had links with Edinburgh and its various Festivals, so it only seems right that the Edinburgh Film Festival is showing his 1980 war movie The Big Red One: The Reconstruction this year.

It's billed as a reconstruction, because up until now it's only been available in a version that was butchered by its studio. This new version puts back about 45 minutes of previously unseen footage, with some digital tarting up of the picture and sound as a bonus. The Big Red One of the title is the First Infantry Division, and the film follows them as they blaze across Europe for the last three years of WWII, led by Sergeant Lee Marvin. It's a bit old-fashioned as war movies go, and the episodic structure sometimes acts against it, particularly in this new extended cut. But the important thing about The Big Red One is this: with Fuller at the helm and Marvin in the lead, this is probably the last big Second World War picture made by people who actually fought in the war.

As a result, there are extraordinary details and images in here that can only be drawn from personal experience. A soldier carrying a bog roll over his head during a beach landing, in case of emergencies later. A fifty-foot long bazooka which can only be assembled in the field, and a line of soldiers queueing up to perform that assembly and being shot one by one by the enemy. The Omaha Beach landing, in which the passage of time is depicted by cutaways to a watch on a dead soldier's hand, as the waves washing over it turn more and more red. Best of all, a hysterically funny birth scene performed inside a tank, which curiously uses the same gag about the French for "push" that Ben Bailey used at Late 'N' Live last night. Lee Marvin is as solidly iconic a presence as ever, with surprisingly good support from the likes of Mark Hamill and Robert Carradine as the grunts. It looks like this new restoration will be going straight to video: which is a shame, as the punchy Dolby Digital sound remix gives it a whole new lease of life over a cinema sound system. 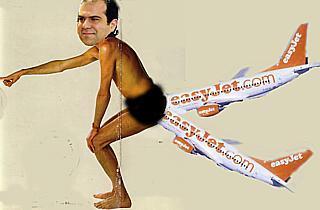 There are some heavyweight guests planning to give a Q&A immediately after The Big Red One, notably Lee Marvin's widow and Robert Carradine. Unfortunately, this being our last event of the Festival, we have a plane to catch. We dash off to Edinburgh airport in good time for our flight, only to find that yet again, easyJet have screwed up and delayed our flight by two hours. That phrase from a couple of years ago, "Stelios can shove his planes up his arse," haunts me for a couple of days afterwards until I exorcise it in the only way I know how.

But never mind, I'm back now. Curiously, I've found over the last day or two that when people have been asking me about the highlights of this year's Edinburgh, I've been prefacing my replies with "well, apart from this 24 hour show I saw..." And it strikes me now that I shouldn't be doing that. Mark Watson's show wasn't a carefully-wrought dramatic performance or a hilarious display of stand-up comedy - in fact, as The Belated Birthday Girl spotted, for large amounts of its running time it was about itself and nothing else, like post-modernism run riot. But it couldn't have happened anywhere else apart from in this city and at this time of year, and I'm proud to have been a part of it. And it's just the sort of event that'll get me back here in 2005. Being a monkey, and all.

Their final thoughts can be found in Postscript 2004 - see the link below.