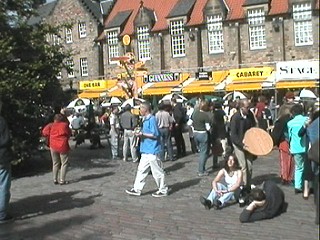 One of the advantages of going self-catering during the Festival is that after a hard day's art and alcohol abuse, you're not forced out of bed early the next morning for the traditional 8am B&B breakfast: as a result, we've all been sleeping in late for most of the week. Having to clear out of the flats by 10am so they can let the next batch of festivalgoers in therefore comes as a fairly nasty shock. We eventually escape from the flats around 10.20 (with cleaners actually working around us during the final stages of packing) and head off to Waverley station to drop off the bags at left luggage, before heading off to squeeze in a last couple of shows.

The queues for left luggage are longer than we expect, and as a result we get to the Pleasance just too late for our initial choice of show, Play Wisty For Me: The Life Of Peter Cook. So we check out the other stages in the Pleasance (it has ten in total) and make it into Gamblers a mere 15 minutes later. One of the nice things about the Fringe is going to see something like this not because you planned to, but because it just happened to be in the right place at the right time. Double Edge Drama have produced a new version of one of Nikolai Gogol's lesser-known one act plays (in a new adaptation by Joe Spence), about a group of card sharps in a Russian inn all trying to outsmart each other. It's a well-acted hour or so's worth of fun, just right for a Saturday morning, and shows that plots about gambling stings go back a long way. 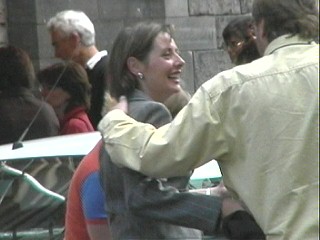 For the final show of our visit, we go back to Mervyn Stutter's Pick Of The Fringe. The final show of a Festival visit is always quite important, as it tends to colour your view of the whole week. Rachael's become a big fan of Stutter (she's come here most lunchtimes this week), but is slightly worried that the quality of the acts has been dropping the last day or two: with the end of the Fringe approaching, nobody's too concerned about showcasing their act any more. Luckily, the bill today is another cracker. Prettiest moment: Monkey And The Waterfall Dance Theatre Company doing a visually gorgeous piece with masks and stilt-walking. Silliest moment: in one of those one-off drunken collaborations that doesn't really seem to happen any more, Rob Newman (yes, that Rob Newman) plays Clair de Lune on the piano while Arthur Smith (obviously, that Arthur Smith) sings Moon River over the top of it - a typical Arthur Smith idea that manages to be hysterically funny for no reason whatsoever. Tunefullest moment: Australian group Ruby Fruit Jungle finishing off my Festival perfectly with a traditional song Kaki Lambeh. All this and we bump into Carol Vorderman on the way out of the venue, as she makes her way in for Richard Whiteley's Teatime Chat later that afternoon. We also bump into Richard Whiteley, but somehow that doesn't seem quite so exciting. 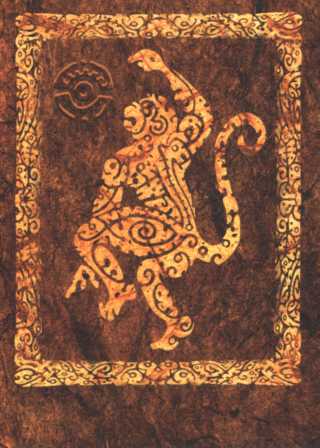 Barring a minor incident where Christine's suitcase is nearly destroyed in a controlled explosion, we all make it safely onto the train home by 4pm. As it's my birthday, Spank's pals have touchingly brought along a bottle of champagne and some birthday cake, so the journey passes pretty painlessly. It's been a great Festival: we've seen a wide range of things, we've all got through a week of living together without a single homicide (if you know Spank's pals you'll appreciate what an achievement that is), and the city and its people have been wonderful to us throughout. And despite the impression Irvine Welsh gives in Filth, none of Edinburgh's policemen appears to be involved in the production of animal pornography at all. Which is probably just as well for me. Being a monkey, and all.

Jon - Gamblers was nicely played and a very neat piece of theatre, altough it felt more like a student production than professional. Keep Young And Beautiful was a slight comic piece for four actresses and a guest male comedian (Junior Simpson today) - not great, but it filled an hour.

Christine - Shylock was the best thing I've seen this Festival. I'm a great lover of both traditional Shakespeare and Christopher Marlowe, and the actor (whose name I forget, sorry) brought the two together brilliantly.

Ken - saw Mervyn Stutter yet again. Because of overruns he had to cut his bit of the show short, which was good because I've seen it too many times already.

Lesley - I do fancy one of those chaps in Gamblers. Couldn't tell you his name, though.