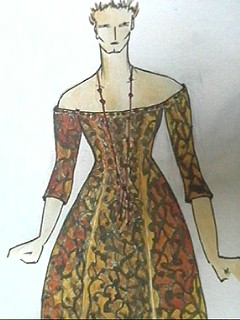 After the mess that was Die Ahnlichen - effete Londoner Rob G, writing from back home in effete London, claims that the Telegraph review of the play should be posted outside the theatre as a health warning - we decide to give the International Festival one more chance, and go to see an afternoon matinee of the play Life Is A Dream at the Royal Lyceum Theatre. Luckily, the Festival gets to redeem itself with this one. A translation of a 17th century Spanish play by Pedro Calderon de la Barca, it's the story of a Polish king who discovers through astrology that his son Segismundo (George Anton) will take over the throne and wreck the country. To try and prevent the prophecy from coming true, he has Segismundo locked up from birth without telling him who he really is. Ultimately realising that this cannot go on forever, the king has Segismundo drugged, put on the throne and treated as a king: if he does well, everyone's happy, but if he goes berserk, he can be locked up again and told it was all a dream. Segismundo slowly starts to lose his sense of what's real and what's a dream, which was pretty vague to start off with anyway. Meanwhile, others are struggling behind the scenes to take control of the throne, including Prince Astolfo (Nicholas Bailey) and Princess Estrella (Hilary Maclean). And on top of all that, Rosaura (Olwen Fouere), the woman Astolfo has recently dumped, has come into town disguised as a man to take her revenge... All these complex threads eventually resolve themselves, helped by some great acting from all concerned (and a special mention here for Sylvester McCoy as Clarin, Rosaura's servant and general comic relief). The bold, minimalist design also helps: a stage covered in black pebbles and a huge gilt-framed mirror which hovers over the stage reflecting the actors and (in the final scene) the audience itself. Next up is Ronnie Drew - I Hardly Knew Ya!, 75 minutes worth of songs and stories from one of the original members of the Dubliners. Attendance for this one is pretty much compulsory, as my dad's collection of Dubliners records was some sort of major formative influence on my early years. All the familar favourites from dad's collection - Macalpine's Fusiliers, The Auld Triangle, Dicey Reilly - are all trotted out as expected, all done with that distinctive bullfrog croak of Drew's, the sort of voice subwoofers were invented for. Drew's good at putting the songs into context with his patter, and comes out with some great stories about literary Dublin. My favourite involves Stephen Behan, Brendan's father: too lazy to dig his garden, he phoned up the Special Branch anonymously and told them there was a cache of IRA guns buried in it. Some nice historical anecdotes too, like the one about the courts in Dublin (all run by British judges) being totally frustrated by the way defendants always refused to recognise the court, claiming the British were fitting them up on political grounds (even if they'd just nicked a bike or something). One judge, exasperated by a day's worth of this, asks a prostitute in the dock, "Tell me, madam, do you recognise this court?" "Oh yes, yer Honour," she says, "I recognise every last one of yez."

Tonight's film is the European premiere (oooh!) of The Last Days Of Disco, and we're graced by the presence of director Whit Stillman and star Chloe Sevigny. Even if all they do is wave at the start and run out of the cinema before the movie begins. Part of the trilogy that includes Stillman's earlier Metropolitan and Barcelona, Disco comes chronologically between the two (it's set in the early 80's), and characters from the other movies pop up briefly in this one. Like his earlier work, it's a very wordy comedy of manners set among the yuppie classes, but with a much more fun soundtrack this time. Sevigny and Kate Beckinsale are great as the two girls working in publishing by day and hitting the discos by night. Like Stillman's other films, maybe everyone's just a little bit more articulate than they need to be (a nightclub owner starts getting suspicious when one of his employees uses the past perfect tense in a sentence? Really?), but the digressive bits define the characters beautifully and are funny in their own right, like the longish discussion of how Disney's Lady And The Tramp is basically propaganda to convince children that they should have relationships with unreliable drifter types rather than reliable and faithful Scottie dog type people. Useful tip for life from the film: if you're trying to get someone into bed, try to drop the word "sexy" into your conversations with them, and see if they'll take the hint. Chloe Sevigny's use of this is probably a bad example, though. "There's something really... sexy about Scrooge McDuck." 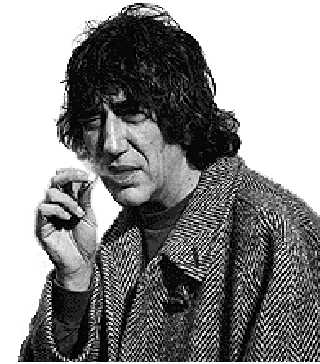 A breakneck taxi ride across town after The Last Days Of Disco to catch An Evening With Howard Marks - luckily, he starts late, but not for the reasons you'd expect. (Stephen Berkoff's earlier show overran, apparently - I saw it in London and can believe that.) Marks is certainly in fine form for someone who ingests the industrial quantities of dope that he claims to. His show's basically a series of readings from his autobiography Mr Nice, documenting his career as a hash smuggler and eventual arrest and rehabilitation. His tremendous charm carries all this off, not to mention his highly developed sense of the surreal: he realises life can be extraordinarily weird shit even if you're not on drugs. Rachael was worried this would all turn out a bit like Bruce Robinson's drunken ramblings of a couple of days ago, but Marks is much more articulate: the one way in which it does resemble the Robinson talk is that he's much more interested in talking to audience members who violently disagree with him, such as the woman who storms out noisily when he's talking about his dealings with an IRA man during his early days as an importer. It subsequently turns out that the "IRA man" was just some Irish nutter pretending he was in with the big boys, and apparently he was the only person who the IRA have issued a statement about denying he was ever connected with them: still, it makes for a pretty lively debate in the Q+A at the end.

Finally a return to Late and Live at the Gilded Balloon. Luckily the band's much better (Ronnie Golden and the Rex doing old soul and R+B covers, with a guest vocal appearance from Mark Lamarr for two numbers), so we end up staying till chucking-out time at four am. The comics are Stuart Francis ("I went out with this girl way too long. She was Chinese, that's her name." OK, it looks rubbish written down, so sue me), Kevin Gildea (can't remember a damn thing he said) and the man they're now calling Perrier Nominee Ed Byrne, who goes up in my estimation tenfold by doing an almost entirely different set from the one he did on Sunday. "Girls don't enjoy these British costume drama movies, you know. They just drag us men along to make us suffer. It's a bit like men's attitude to anal sex." Any comic with the insight to recognise the similarity between watching a Merchant Ivory movie and being sodomised deserves all the Perrier awards he can carry, in my book.

Christine - the Pleasance Over The Road is definitely my favourite venue so far. I had a total misconception of who Howard Marks was - I thought he was a North London stand-up or something. [Rob D - "and now, live on stage, please welcome the Medellin Cartel!"] He obviously thrives on controversy and heckling, and I think both he and I were disappointed that he didn't get more.

Lesley - two good dance acts today - Water Bearers were the most authentic-feeling African dance group I've ever seen, and the Australian Legs On The Wall were very good too. The atmosphere at Howard Marks was incredible, very late night and smoky.

Rachael - Alan Sillitoe was really well prepared for his Book Festival talk, and even gave some useful tips on writing screenplays. Why couldn't Bruce Robinson have been as good! Didn't enjoy The Last Days Of Disco very much - if I wanted to see lots of young things complaining about their lives, I'd watch TV instead.

Ken - lots of Antipodeans today, including Tim Bray (more theatrical than a straight stand-up act), Kate Smith (talking about her travels since leaving Australia) and Legs On The Wall (even better than when we first saw them at Mervyn Stutter). Last Days Of Disco was much better than I expected, considering that Spank recommended it personally. Just For The Craic was five Irish stand-up acts, none as good as Ed Byrne on Late and Live. How can we have seen this man so many times without paying to get into his show?

Sylvia - dropped out for most of today and went to Glasgow to see some of the Charles Rennie Mackintosh architecture. Back in Edinburgh, Legs On The Wall was a very interesting combination of acrobatics and dance, and Howard Marks was a total hashhead but enjoyable all the same.

Jon - Life Is A Dream was my only main Festival event, and it was excellently done. Sylvester McCoy was superb, even if he did climb all over me at one stage. Legs On The Wall was highly enjoyable, starting off with acrobatic tricks and moving on to more of a narrative dance later. The Last Days Of Disco was the usual Whit Stillman style, lots of conversation but very little plot. Not as good as Barcelona, but up there with Metropolitan, and Kate Beckinsale is lovely. I enjoyed Howard Marks immensely, but wish he'd said more about his release from jail and his subsequent involvement in the legalisation campaign. Late and Live was very funny - particularly liked Stuart Francis' idea of going into a bookshop and saying "I'm looking for a book called How To Cope With Rejection Without Killing. Do you have it?"