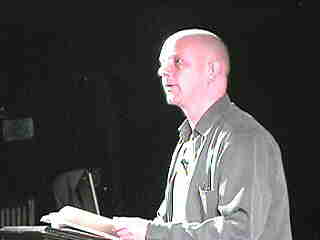 An unnaturally early start at 11:30am (and tomorrow it gets worse!) to see Nick Hornby at the Book Festival, doing one of the Meet The Author sessions. It's sponsored by The Observer, and Jay Rayner from the paper is there to ask questions, after Hornby's read a couple of extremely funny passages from his new book, About A Boy. The main thrust of the discussion is about how he's coped with moving from writing autobiographically (Fever Pitch, his famous Arsenal book) to writing semi-autobiographically (High Fidelity, which is more generally about a whole swathe of men too obsessed with music for their own good, myself included) to, er, more or less making things up completely (About A Boy, as he points out, isn't really connected to his life at all, as he's never struck up a complex friendship with a twelve-year-old boy). The reading is the most entertaining part of the event, though, and nearly persuades me to join the queue at the end to get Hornby to sign the hardback. But not quite. (My budget for hardbacks tends to be limited to one a year, and I haven't quite found the one for 1998 yet.)

3:30pm on a weekday afternoon, and the Filmhouse is filled to capacity with people eager to watch an old Play For Today from 1981. Why? Because Alan Clarke directed it. He directed a couple of films that most people would know instantly (Scum and Rita, Sue And Bob Too), did a large amount of ground-breaking television starring young unknowns who went on to become enormously famous (Tim Roth in Made In Britain, Gary Oldman in The Firm), and should be on our list of great British directors alongside Ken Loach and Mike Leigh. But because the vast majority of his work was television drama (back in the days when it was mostly shot on crappy old videotape), he hasn't had the recognition he deserves, and since his untimely death in 1990 at the age of 54, his work tends to have gone unnoticed. Now that people like Roth and Oldman are directing their own films and proclaiming loudly that Clarkey taught them everything they know, the Film Festival has cunningly organised a retrospective of his films for the cinema and TV.

This afternoon's play is Psy-Warriors, made for the BBC after the minor fuss over the notorious Scum. (He made it for the Beeb, they banned it, he made it again for cinema release just to get it seen: both versions are on show at the Festival.) Written by David Leland, it's a cunning thriller that does everything possible to confuse the viewer from the word go, which is clever given the subject matter. Three English people are being held in an army camp accused of bombing an Aldershot pub, and undergo all manner of interrogation and psychological torture. Shooting it on video helps emphasise the style: everywhere's intensely lit with bright white light, all the rooms and corridors look the same. As the interrogation gets more intense, we're suddenly completely thrown when one of the three says he wants out: because they're not terrorists at all, they're soldiers who've volunteered to go through part of this torture as part of a British army experiment, trying out techniques for subsequent use in Northern Ireland. From that point onwards (about halfway through the film), the relationships between the "interrogators" and the "prisoners" become much more blurred. It's stunningly acted by a cast of British TV regulars including Rosalind Ayres, Anthony Bate and Colin Blakely, and is a reminder of the old days before Film On Four and Screen Two when one-off TV dramas tended to be just shown once and locked away again. (Although a fortuitous coincidence meant that the original TV screening of Psy-Warriors took place on the night Bobby Sands died, which helpfully pushed up its controversy quotient still higher.) 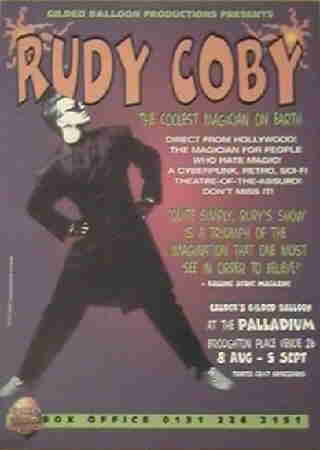 After yesterday's raves and otherwise for the self-styled Coolest Magician on Earth, Rudy Coby, I obviously have to check him out. He's done some time performing in Hollywood in the past, but this is his first Edinburgh, and a few appearances on Channel 4's Edinburgh Or Bust have helped increase his profile a bit. The show's not quite as original as it likes to think it is - at least one of the tricks is stolen directly from Penn and Teller - but if you like that sort of loud, brash, confrontational approach to magic, it's great fun, and yes, Little Elvis is as good as everyone says he is. (I've always used Little Elvis as a slang term for the male generative organ, so that was the most disturbing part of the show for me, but there you go.)

With a gap of a couple of hours in my schedule, I run round to the Assembly to see if I can fit in another show of some sort. I end up seeing Disco Pigs, one of the hits of last year's Fringe making a return visit (having popped up briefly in London's West End in the meantime). Pig (Kevin O'Leary) and Runt (Orla Fitzgerald) have been friends since birth, growing up next door to each other in Cork City in Ireland. By the age of seventeen they're completely obsessed with each other, communicating in their own language and spending all their time together in the pubs and discos of what they call Pork City. Can a friendship this intense really last a lifetime, or will other considerations get in the way? Enda Walsh's script is played at maximum velocity by the two leads, bouncing off each other and the walls of the cage they're enclosed in with tremendous energy. And having slagged off one of the Assembly's sound crew the other day, three cheers for sound designer Cormac O'Connor, who keeps control of a fabulously complex soundtrack of effects and music for more or less the whole hour while still leaving space for the actors' lines. 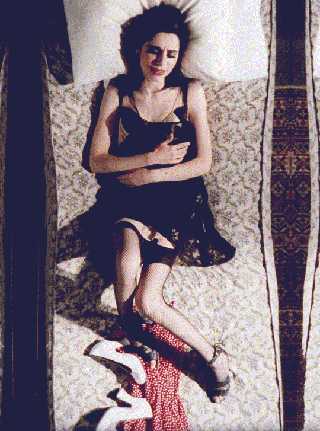 I have no idea why one of the main rock venues in Edinburgh is called the Jaffa Cake. It just is. Personally, I'd have picked a name which got across the fact that it's a hot dark sweaty shoebox of a room, so hot that twelve hours after leaving it (as I'm writing this) my watch is still steamed up. As part of the Flux Festival, the Fringe's concession to rock music as an art form (surprisingly, only in its second year), PJ Harvey is playing live to an unnaturally packed house. My one previous experience of her live was seeing her support U2 at Wembley in 1993, and watching the U2 fans getting very very confused. (God knows what she did to the All Saints fans at V98 last weekend.) Polly's in great form, doing a lot of new stuff from the forthcoming album Is This Desire? as well as the old favourites.

With the final encore of 50ft Queenie still ringing in our ears, Nick and I decide to round off the day with a slightly shorter queenie from New Zealand. (Basically as a sop to Spank's regular Kiwi readers. Lee! Paul! How's it going?) Mika is, for want of a better description, like a Maori version of Julian Clary (if that's possible to imagine), combining kitsch cabaret songs with some rude patter. The musical highlight has to be his rendition of Endless Love where he does both the Lionel Ritchie and Diana Ross parts in rapid succession, although the hi-energy disco version of Aqua Marina from Stingray comes a damn close second.

Lesley - Terry Gilliam was very good at the live transmission of Edinburgh Nights With Mark Lamarr. He wasn't as drunk as Mark said he was.

Rob G - Boom Chicago was very fast and very funny, five Americans based in Amsterdam doing sketches like an infant schoolteacher who controls her kids with a gun. Late Laughs is also worth a look if you're trying to avoid the heavily commerical and hyped end of the Fringe comedy scene. As an effete Southerner I was a bit worried about the Glaswegian woman who used the 'c' word a lot, but maybe that's just me.

Ken - Edinburgh Nights was enjoyable but the lights were incredibly hot. Modern technology means TV lights don't have to be that hot, but modern technology obviously hasn't made it up to Scotland yet. Terry Gilliam's film Fear And Loathing in Las Vegas is brilliant - watch out for Johnny Depp's bald spot, he's finally plucked up the courage to make a film without the toupee he usually wears. And The Full Montego is a good stand-up act, featuring a comic who's only ever played in strip clubs before, so he has to perform with three strippers on stage. But they don't do the Full Montego, unfortunately.

Jon - Saw Mervyn Stutter again - it looks like he has two sets that he performs on alternate days, so beware if you're planning to see his Pick Of The Fringe more than once or twice. Unfortunately, I've seen the same set twice so far. I bummed a ticket for the film Get Real in the returns queue from some woman who took pity on me. Set in Basingstoke, but interesting. A poignant, touching and funny gay teenage love story. As for PJ Harvey, I'd rather have been at Fear And Loathing to be honest, but she got better towards the end.