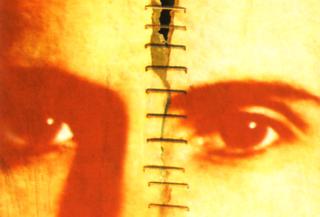 As ever, the Traverse is the powerhouse of new theatre on the Fringe. So I'm a little disappointed that with this year's packed schedule (yes, I'll talk about all the web page delays eventually), I've only got one visit planned to the venue. (I'm seeing another Traverse production tomorrow, but that's... somewhere else.) No reflection on the quality of its work, more a reflection on my suboptimal organisational abilities. Traverse productions have been picking up awards in 2004 just as much as in previous years, and Colchester Mercury Theatre's The Pull Of Negative Gravity has picked up a lot of them. Jonathan Lichtenstein's play is set on a decaying Welsh farm, which Vi (Joanne Howarth) has been struggling to maintain since the death of her husband. Of her two sons, Rhys (Daniel Hawksford) has stayed to help on the farm while Dai (Lee Haven-Jones) has gone off to fight in Iraq. The situation on the farm is getting more and more tense, with Vi getting further into debt and Rhys falling in love with Dai's fiancee Bethan (Louise Collins). When Dai suddenly returns home injured from the war, things inevitably come to a head.

A couple of Spank's Pals passed on seeing this play because it sounded too depressing for first thing on a Wednesday morning. And it's true, a cold list of the incidents in the play would make it sound like hysterical melodrama. The stunning achievement of the writer, actors, and director Gregory Thompson is to keep the action just on the right side of believability. As a result, this is a tremendously moving 90 minutes. The four performers give their all: Lee Haven-Jones has the most technically difficult role, but it's never allowed to overshadow the excellence of the other three. And there are some lovely physical details in the production, like the sudden gusts of air over the audience's heads to accompany helicopter sound effects. The Pull Of Negative Gravity deserves all the accolades and awards thrown at it, but I wouldn't expect anything less from this venue.

And so on to that other Film Festival tradition I mentioned yesterday, the McLaren Animation programme. Every year, the Festival puts on a series of programmes of new animated British shorts, and asks the audience to vote for the best one. And as ever, the art school experiments are doomed to fail when put up against the more conventional narrative and funny films, because that's the way audiences work. Still, the combination of the two approaches makes for an interesting hour and a half.

Of the experimental shorts, Andy Glynne's Dimensions is a clever attempt at visualising what schizophrenia feels like. Salvador Maldonado's creepy Metempsychosis Of Objects has the odd moment of Jan Swankmajer menace, but spends too much time grubbing around in the shadows and too little time showing you things. And Peter Collis' Nova is one of those pieces that makes animation purists grumble, as it's more treated footage of a fireworks display than actual animation.

The narrative shorts are more consistently fine, although it's fun to note that some high-budget professional productions don't get half the audience acclaim of some of the simpler student affairs. Matt Abbiss' work is a case in point: his two shorts here (Play and Bus Stop) are simple line drawn characters getting into perfectly timed comic scrapes. Neil Jack's The Tree Officer is an Aardmanesque romp, a claymated documentary about Gary Dremmell, who runs a council tree office. As with Aardman's work, there's a huge amount of background detail and character work that makes this a joy to watch. Of the less amusing narrative shorts, Sumito Sabakibara's Kamiya's Correspondence is a delicate little watercolour of a film, touchingly showing a young Japanese girl writing to her mother. There's even a music video thrown in, Finlay Costello's On eBay, which seems perfectly charming to me until I find out it's a Chumbawamba song. 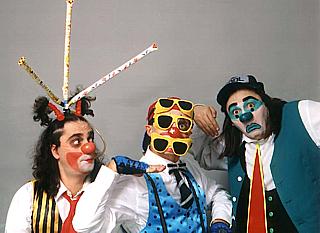 Mimirichi have been getting ecstatic writeups in the press since they arrived in Edinburgh. They're a group of four clowns from Ukraine, and people have been praising their Paper World show to the skies, insisting that it's just the sort of thing to awaken your inner child. This always strikes me as what reviewers say when they're too wussy to engage with any challenging shows on the Fringe, and will accept any mindless child-friendly nonsense that doesn't disturb them too much. But dammit, I think they're right here.

Visually, the show's a treat: it starts with some beautifully choreographed shadowplay behind a large paper screen, and then one of the clowns moves in front of it to start sweeping up the stage. We understand the principles of clowning: we know that stage is going to get messed up over the next hour. Messed up? You have no idea. Part of what makes this show so delightful is the enormous scale of some of the effects, notably a glorious bit of total audience participation around halfway through, and a curiously moving encore. But at the same time, Mimirichi are old-fashioned clowns, and enjoy the thrill of full-on anarchy. There's a lovely bit early on where they cause mayhem with a dozen or so glasses-wearers in the audience - and if anything, watching them stand back and let the situation resolve itself is even funnier. Sit in the centre of the front row - because if you don't, you'll want to go back so you can sit there next time. 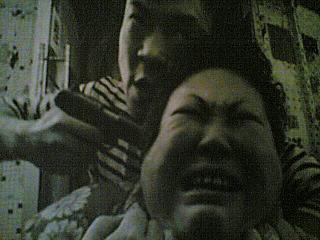 With so many events and films and whatnot on display in Edinburgh, your motives for choosing one thing to see over another can sometimes be a little tenuous. So here's why I went to see Liu Fendou's film The Green Hat. A little over ten years ago, I went on a tour of China with a dozen or so people. I can't remember which city we were in, but there was one day when one of our party was getting a lot of attention from the local residents. It took a while to discover what was going on: basically, everyone was amused by his green baseball cap. This is because in China, a man wears a green hat to symbolise that his wife is seeing someone else.

The production company that made The Green Hat is called Almost Entertainment - it's a careless name for a company, though not as bad as the Korean film Phone coming out this week in the UK, which was proudly made by Toilet Pictures. But I digress. Three young Chinese men rob a bank, and one of them calls his girlfriend in America to say he's on his way. Unfortunately, this is the point where he finds out that she's been seeing someone else. As matters come to a head, the narrative suddenly switches tracks, and we're following the life of the cop investigating the robbery... whose wife is seeing someone else, too...

Liu's film has some interesting ideas - the narrative jump halfway through being one of the better ones - but the fact remains that once we switch perspective to the cop, it gets a lot more conventional and a lot less interesting. There are some neat visual gags, notably when the cop finally meets his wife's lover on the day of her birthday, and they spend much of their meeting comparing cake sizes (not a typo). And we cut away from the robbery to watch a monkey bitchslapping a dog, which is always a good thing. But there isn't much else of interest here. Almost Entertainment is probably about right.

Diane - Manchester Girl is a super show. There are many one woman shows on the Fringe following a similar theme of 'my early struggle to make it in showbusiness, achieve celebrity, escape my provincial town etc.' I have seen three so far, but this was easily the best in terms of production values, performance and an original slant on a familiar theme. Sue Turner-Cray creates a fictional character called Sara Taylor, but the show is clearly autobiographical. Sue, wife of respected musician Robert Cray, now lives in the States having abandoned her early modelling career to go back to college and study to become a writer.
At the play's beginning we see Sara as a frustrated teenager working in a Leicestershire factory and hoping for more. An opportunity to audition for a Manchester model agency leads to a contract in Japan, where enthusiastic Sara is up for everything. Enthusiasm is temporarily quelled when she can't fit into the size 6 designer clothes she is expected to model, and this leads to vigorous dieting, with plenty of drugs to compensate for the food she's missing. Her South American interpreter takes her under his wing and soon she has moved in with him, but beneath his kindness lurks a controlling personality and occasional violence. In spite of his shortcomings, Sara's lover is a learned man who has introduced her to the world of books and self-improvement. The play ends with Sara's rejection of his proposal, a move to America and the start of her new life via a university course.
This could have been formulaic and dull, but in Sue Turner-Cray's hands there is never a boring moment. She dances, exercises, somersaults on a high wire and changes voices and accents at the drop of a hat to create all the play's characters. The writing is spot on and I am certain that we will be seeing more of this talented writer and performer. Note: this must be the only performance on the Fringe where Jennifer Lopez gets a programme credit (as one of the designers of Sue's costume).

Diane - I went to Putting It Together as I was looking for a late night show and like the work of Stephen Sondheim. However, my expectations  weren't too high  because this is a student production (Cambridge University Savoyards) and the student productions I have seen in Edinburgh are usually full of enthusiasm but short on talent. I'm happy to report that this was the exception. Most of these performers graduated in 2003 and have gone on to postgrad drama courses. They were very accomplished singers, well equipped to put over the difficult Sondheim numbers with their sudden key changes and need for clear diction to enable the audience to hear the clever words.
This revue was put together by Sondheim and the singer/actress Julia MacKenzie. Loosely based on relationships, it ties together the songs from Company, Follies, A Little Night Music, Merrily We Roll Along and other Sondheim musicals.  I liked the fact that, in contrast to other Sondheim revues I have seen, this one did not rely on a narrator to link the numbers - Sondheim and MacKenzie let the songs speak for themselves.
The young cast delivered every song with feeling and a depth of emotion which belied their youth. A must for fans of Sondheim, and a good end to a day of frantic theatregoing in Edinburgh.