The best way to look at the film is as a mood piece, and first-time director Park Ki-Yong certainly gets a distinctive atmosphere in each of the stories. There's a couple in the dying stages of a relationship, desperately trying to use sex to patch things together. There are a pair of film students who slowly commence a relationship while waiting for their cameraman to turn up. There's a hilariously drunken encounter between a man and a prostitute which turns darker once they begin to sober up. Finally, a long-separated couple attempt some sort of reconciliation.

The main thing that attracted me to Motel Cactus was the presence of Christopher Doyle, Hong Kong's hottest director of photography and the man mainly responsible for the extraordinary look of Wong Kar-Wai's films such as Chungking Express and Happy Together. Doyle doesn't disappoint, varying his shooting style from story to story: following the drunks with wild hand-held camera and distorting lenses, while the reconciling couple are treated more sensitively with long takes and little camera movement. The common visual theme throughout the stories is distortion through water: a large number of shots are filtered through the rain outside or the shower spray inside. In the end, it's the look of the film that'll stay with me from this one, rather than the characters or the story. 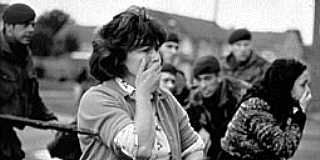 Andersonstown, Belfast, 1972. Bernie McPhelimy (Julie Walters) and her family have just moved into the estate in an attempt to escape the violence of the Falls Road, only to find it following them onto their own doorsteps. When one of her closest friends is gunned down on the streets, Bernie decides it's time to take action for the sake of her children. She initially joins a women's peace group, only to end up being pushed into the spotlight and more or less becoming their spokeswoman. The trouble is, both sides see her attempts at peacemaking as an attack on them, and the family she was trying so hard to protect ends up suffering as a result.

Based on a novel by Mary Costello, Titanic Town is a slightly uneasy of fact and fiction: Bernie is a fictionalised version of Costello's own mother, who was indeed one of the women involved in the peace campaign, but not the leader as shown here. However, she did do most of the stuff depicted in the film, including talking to both the IRA and the British Government, and collecting a huge number of signatures for a petition in support of her campaign. And the attacks on her family and home are sadly all too true. Still, it's curious that for some parts of the film she's treated as a well-meaning buffoon: initially making a suggestion that the streets would be made a lot safer by rescheduling all the shootings to happen during the night, angering both sides with offhand remarks during interviews, and throwing in the occasional verbal goof for good measure. (Though I did like her friend's accidental reference to an English civil servant as the "Paramilitary Under-Secretary".)

What isn't at issue here is the quality of the acting. Julie Walters, and Ciaran Hinds as her husband, are as good as you'd expect. The real find is Nuala O'Neill, who plays Annie, the fictionalised version of Mary Costello herself. The story is told through her eyes as it coincides with her coming of age, and she handles the weight of the task beautifully. In case you're wondering about the title, Andersonstown is where the Titanic was originally built. "They wrote NO POPE HERE in big letters along the side," explains Annie's boyfriend. "Lucky old Pope," thinks Annie. 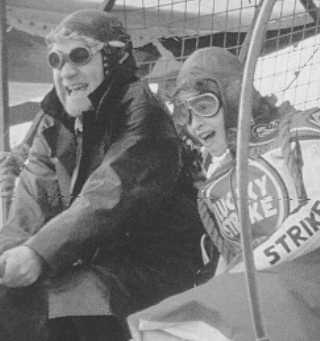 It was a smashing teaser for the film. Kenneth Branagh is sitting in an office trying to explain the plight of Helena Bonham Carter, whose character has Motor Neurone Disease and is sitting next to him in a wheelchair.

It was a great little clip and made me curious to see more. Unfortunately, I saw it last autumn, as part of a set of trailers advertising the Autumn 1997 season on BBC2. (Remember the 15 minutes or so after the last episode of This Life? That's where you may have seen it.) Despite the trailer, The Theory Of Flight didn't appear in the Autumn 1997 season. Or the Winter 1998, Spring 1998, Summer 1998 or Autumn 1998 seasons, for that matter. And now it's getting its first screening tucked away at the start of the London Film Festival. Whether this means they've been holding it back for a full-blown cinema release, or they're just trying to bury it, isn't clear, and director Paul Greengrass didn't hang around after the screening to say. Hopefully, it'll get a much wider release, as it's the best thing I've seen so far at this year's LFF. (Yes, I know it's the first day, so what?)

After a nervous breakdown and an ill-advised attempt to hang-glide off the roof of the Bank of England, Richard (Branagh) is sentenced to community service, and sent to look after Jane (Bonham Carter), whose Motor Neurone Disease is heading towards its terminal stages. Jane has a desperate urge to lose her virginity before she dies: Richard is still toying with his dreams of flight and building his own plane. The two of them will eventually strike up a friendship that will help them both achieve their goals.

Of course, the whole flight metaphor at the centre of the film couldn't be more sledgehammer-obvious if it tried. But the thing that keeps it all together is the two leads. While Branagh gets to do his Likeable Bloke act with his usual efficiency, it's Helena Bonham Carter that's the real revelation. Rather going through all the standard Hollywood Cripple cliches, she turns in a thoroughly astounding performance that manages to almost completely avoid sentimentality, mainly because her character is lovably cynical about everything and swears like a trooper with Tourette's. Maybe it's the lack of the traditional sentimental portrayal of the wheelchair-bound that's making people run scared of distributing this film more widely. Which is a shame, as it's this approach that gives the magnificently romantic final shot a real emotional impact, as Richard finally works out the best use for his plane.

And finally, a personal message to Dave. Dave Allen this time: not the Irish guy who tells jokes, but the English guy who tells jokes, plays guitar and drums, runs bars on seedy trawlers and does some computer consultancy on the side. I just made it out of The Theory Of Flight in time to catch his band's farewell gig at the Ross Leopard trawler, before he goes on a round-the-world trek for the next four months. Best of luck, Dave, and keep sending the emails.

Old Lag - A group of shorts, made by women, of their gender looking at men with a view to starting relationships. To a male critic quite fascinating. The films are enchanting, thought-provoking, funny, chilling, with plenty of wry twists. As good (if not better) as a night out with Michael Caine. (No, we didn't get any tickets for that one either - Spank)

Ken - A brilliant script by Hal Hartley is sadly let down by its director... Hal Hartley. His own closeness to the project (for which he also wrote the music score, and in which his wife plays the mute Vietnamese shopkeeper) prevented him from making the savage cuts necessary to a film that would be superb if it were only half an hour shorter and bereft of some very unmeaningful silences. The one must-see scene is pure toilet humour, as Henry Fool (Thomas Jay Ryan) literally and noisily shits himself when he discovers his girlfriend is pregnant. The real star, however, is James Urbaniak (better known from the TV sitcom Caroline In The City) as a blue-collar wannabe poet. In summary, I loved the plot - why did it take so long?