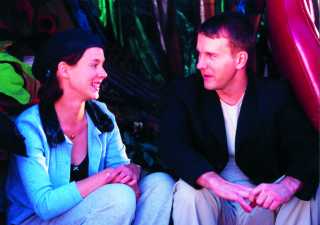 Another day, another DV documentary. Filmmaker Andrew (Griffin Dunne) is fascinated by the nature of fame and the way it changes people. His plan is to select an up-and-coming star and closely follow their progress with a small documentary crew. He chooses actress Lisa Picard (Laura Kirk), whose major claim to fame so far is a cereal commercial that caused protests for its gratuitous nudity. With her supporting role in the Melissa Gilbert TV movie A Phone Call For Help just days away from transmission, Andrew follows Lisa, her curiously anonymous boyfriend (Daniel London) and her actor chum Tate (Nat DeWolf) to see how their lives will change in the wake of Lisa's big break.

You'll remember director Griffin Dunne from his starring roles in An American Werewolf In London and After Hours. You'll certainly remember him after famous, as he's all over this film like a bad rash: layering it with voiceover, inserting scenes of him pondering in his edit suite, and frequently running into shot to bugger up the proceedings he's meant to be impartially observing. But by now, you've probably realised that this is a spoof documentary anyway.

famous isn't brilliant, but it's an amusing enough satire on low-level celebrity. Lead actors Laura Kirk and Nat DeWolf also wrote the script, and presumably the observations of the bitchiness and self-obsession of New York media life are drawn from bitter experience. There are some great casual one-liners: Lisa starts to discuss the plot of a monster movie she made early in her career, and then pulls up short with "I won't tell you what happens next, just in case it gets released."

Probably the highlight is a subplot involving Tate's own bid for stardom: a one-man theatre show about homophobia which has the authentic stench of bad fringe theatre. Nothing else in this film is as well-observed as that, but you get a few chuckles, some neat celebrity cameos and the occasional surprising emotional moment (when Lisa's TV movie finally airs) on the way to a beautifully cynical climax. But I was saying all that stuff Dunne does about Heisenberg's Uncertainty Principle years ago, you know. 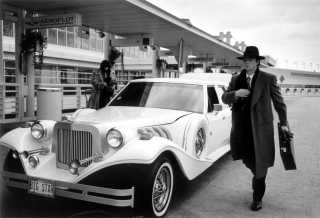 The sequel to director Alexei Balabanov's 1997 film Brother, which I haven't seen. But I did catch his intermediate feature Of Freaks And Men, a surreal look at the trade in spanking pictures in turn-of-the-century Russia, and that was interesting enough to spark my curiosity in this one. Gangster pictures are of course a dime a dozen in British cinema nowadays, but this manages to be a bit more than Lock Stock And A Machine Gun From The Time Of Chapayev.

Brother followed the adventures of the Bagrov brothers, Danila (Sergei Bodrov) and Viktor (Viktor Sukhorukov) as they moved around the outskirts of the Russian mafia - Viktor has a regular gig as a contract killer for them. Brother 2 is more of the same, but with an interesting twist in location. Danila meets up with old army buddy Konstantin (Alexander Diachenko), whose own twin brother is working in America as a professional ice hockey player, but is getting hassled for money as the result of dodgy dealings between the Russian mob and the owner of the hockey team. When Konstantin tries to sort out the situation for himself, he ends up dead, and it's left to Danila and Viktor to travel to Chicago and resolve things by any means necessary.

The plot setup sketched above obviously leaves lots of scope for culture-clash observations as the Russians find their feet in America. Not as much as you may imagine - a lot of the action takes place in the Russian districts of Chicago, so they're dealing for the most part with emigres from their homeland - but it's fun to see Danila struggling with the change in lifestyle and wishing he was home, while the loose cannon Viktor takes the American dream at face value and has a great time. There's a surprising amount of action after a sedate opening half hour, and a soundtrack of toe-tapping Russian pop tunes.

The danger of making a culture clash story like this is that the filmmakers end up showing their own inability to deal with the change in environments. And if there's a problem with Brother 2, it's in its treatment of race. Although the casual racism of the Russian characters is commented upon, it doesn't excuse the shoddy stereotyping of virtually every black role in the film: with the exception of a news reporter who takes pity on Danila, every other black person seen on screen is either a pimp or a gangster straight out of a cheesy seventies movie. It's the only really false note in the American sequences, and if you can get past that obstacle, there's a lot to enjoy here. 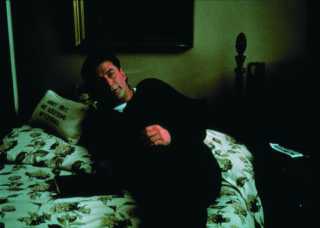 If you're not honest when you're writing a review, it's not really worth doing at all. So I'll come clean with you: I'll have to be a little sketchy on the specifics of State And Main, because I was pissed when I watched it. The Film Unlimited posse chose this movie as the occasion of their big LFF meetup, so Old Lag and myself were joined for several beers by FilmFan, RussMeyerGirl, Datta, kd, nac, RichardM, Paul15, Mrs Paul15, Ben2222, Poobie, Sianie00, Sezzyboy, CherylA and Brad Pitt's PA (surprisingly, the last one isn't a pen name). It was a nice opportunity to finally see people I've chatted to online without ever meeting. Apologies if I missed anyone off the list, but I was still pissed when I compiled it on the night bus home.

Why this film for the FU meetup? Because collectively, we're big fans of the work of Philip Seymour Hoffman, one of the best and most underrated character actors out there. He's in three LFF films this year, two of which played back to back this evening: State And Main (directed by the legendary David Mamet) and Flawless (directed by the evil dog rapist Joel Schumacher). It seemed pretty certain that the man himself would be in town to introduce these movies: in the end, we didn't even get a personal appearance from David Mamet, just a jokey one-minute video in which he told us how much he loved England ("my wife is English, and so are my shoes"). Given that we paid £2.50 over the normal ticket price for this gala screening, that video works out at just over 4p a second: I think we were all hoping for more than that.

Anyway, let's see what I can still remember about the movie. It's yet another satire on Hollywood life, though obviously less raucous about it than Cecil B Demented. Walt Price (William H Macy) is attempting to make a costume drama called The Old Mill. Having been chased out of one possible location already, his crew ends up in the small town of Waterford, and proceeds to take it over. The preparation for the shoot is somewhat panicky, given the various problems with the film's two stars: Bob Barrenger (Alec Baldwin) has a dangerous fondness for underage girls, while Claire Wellesley (Sarah Jessica Parker) has suddenly revealed the no nips clause in her contract, thus ruining a key scene. The writer Joseph Turner White (Philip Seymour Hoffman) is trying to rejig his script to cope with all of these problems, not to mention the dilemma of how you fit product placement for an internet company into a 19th century story...

Mamet's gone soft recently, hasn't he? You used to know where you stood with his work: guys being guys, women being in the way, and dialogue (to steal another great line from Charlie Brooker) that sounds like product placement for the Fuck Corporation. But in recent years the bite's definitely been lost from his writing. As with Cecil B Demented, State And Main is really aimed at a film buff audience that will chuckle contentedly at all the references and feel a little bit like movie biz insiders themselves as a result. It's entertaining enough, but we used to expect something more challenging from Mamet.

The great PSH is as watchable as ever, playing the closest thing to a real human being in the story as he juggles the moral issues of his work with the aid of bookseller Ann (Rebecca Pidgeon). Everyone else is basically just playing a one-liner generating machine, but the gags are enjoyable enough for that not to matter, especially one exchange which couldn't have been timed better: "That's crazy!" "So is our electoral process, but we still vote." Not life changing, but great for a drunken Friday night out. Hic.