Good evening. I'm sorry that I am unable to be with my good friends Cate Blanchett and Barry Levinson and all of you at the Regus London Film Festival Evening Standard Gala of Bandits. I hope that you have as much fun watching the film as we had making it. I also hope that you will give me a raincheck for a visit because I am very much supportive of this festival and I love England. I also want to thank you for being so supportive of the United States. Have fun and God bless.

Apparently Bruce Willis said all this in a video message before last night's screening of Bandits, and was roundly booed off the screen by the audience. Arf! Sadly, we don't get this message before today's matinee, but Bruce still manages to annoy people anyway.

Joe Blake (Bruce Willis) and Terry Lee Collins (Billy Bob Thornton) are known and loved throughout the country as the Sleepytime Bandits. In a flashback from their last, fatal heist, we find out how they met in prison, broke out together and came up with a reasonably foolproof plan for committing non-violent bank robberies. During one getaway, Terry Lee picks up bored housewife and Bonnie Tyler fan Kate Wheeler (Cate Blanchett). Inevitably, her presence starts making the plan a little less foolproof.

This is an enjoyable piece of light comic entertainment from the generally reliable Barry Levinson. There are two problems with it, however, and one of them is the huge gaping void at its core that is Bruce Willis. Generally Bruce can be fine and really contribute to making a movie work: that's why he's a movie star. But other times he's content to just coast along on that lazy smirk of his and let other people do the work. This, unfortunately, is one of those times. Luckily his supporting cast realise this and crank things up accordingly. Billy Bob Thornton provides another scene-stealing role as the neurotic hypocondriac Terry Lee, a world away from his other current starring turn in The Man Who Wasn't There. Cate Blanchett is also extremely good (if somewhat ginger) as the woman who comes between them, and there's solid support from a large collection of quirky background players.

The other problem for me is the ending. I'm not going to spoil it for you, because the film's perfectly capable of doing that for itself: the ending virtually bursts on screen part way through the second reel, waving its hands in the air and yelling "Coo-eee! Over here! Look at me!" There must be a better way of setting up the audience without making it so bleeding obvious, but I can't think of one right now. Still, apart from those two worries this is a sweetly entertaining piece, and worth a look on a Friday afternoon. I was wondering out loud last night - you may even have heard me - that if the excellent Tape was the sort of film Richard Linklater could knock off during a spare few days, what would a film look like if he'd actually spent some time working on it? Waking Life is the answer, and the work shows. In fact, he seems to have gone all out to make the production process as complicated as possible: shooting an entire feature film in live action, and then going back and having every single frame converted to drawn animation.

The content of Waking Life totally justifies its style. It starts off ramblingly: we follow Wiley Wiggins as he wanders through his day, listening to various people talking to him about the nature of dreams and reality, and the blurred boundaries between the two. As someone tells him "most people just sleepwalk through their waking lives or wakewalk through their sleeping lives", it slowly becomes apparent that Wiggins himself is actually in a dream: and he's having trouble getting out of it. As his environment becomes more and more surreal, Wiggins starts to take a more active role in what's going on.

The comparison everyone usually reaches for at this point is Slacker, Linklater's debut feature (I first saw it at the LFF some ten years ago). Slacker was much more free-form by comparison, though: it again consisted of a whole string of philosophical and bizarre monologues and dialogues, but generally the only real links between them were the people involved. Here there's a definite theme to the ideas being discussed, and even (towards the end) some sense of the ideas being collected into a single argument.

The visual style comes dangerously close to overwhelming the dialogue, but never quite does it. A large team of animators, each with their own individual styles, have given this film a totally unique look. Using existing film footage as a basis for the animation gives you images and textures that you'd never get if you simply tried to illustrate these scenes out of your own imagination: there are camera angles, shifts in perspective and tiny moments in the performances that could never have been achieved with conventional techniques. And the frequent moments when the image temporarily breaks away from the filmed template to illustrate individual lines are lovely.

And all of this visual invention acts as a stunning visual backdrop to a veritable torrent of ideas, crackpot theories and freeform associations: why you can't turn the lights off in the middle of a lucid dream, how digital technology will affect the process of evolution, the concept that time is an illusion and we're always living in 50AD, and much much more. This is the first film this festival that I absolutely have to see again. 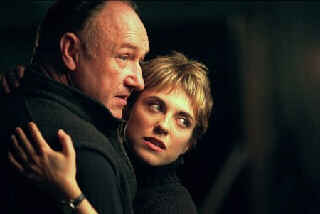 Heist opens, as you may well expect, with a robbery: Joe Moore (Gene Hackman) and his team hitting a jeweller's shop. The heist is somewhat botched, resulting in Moore having his face plastered all over the security camera footage: still, that's OK, he was looking to retire after this one anyway. But crime boss Bergman (Danny DeVito) has other ideas, and forces Moore into doing One Last Job for him. So reluctantly, Moore assembles his team - his wife Fran (Rebecca Pidgeon), Bobby (Delroy Lindo), Pinky (Ricky Jay) and Bergman's nephew Jimmy (Sam Rockwell) - and they make plans to do The Swiss Thing. Except this is a David Mamet film, so you know it can never be quite as simple as that.

Old Lag regularly complains that he's disappointed by Mamet's films in comparison with his stage plays. He's got a point, but I suspect Mamet has totally different aims in the two media. Theatre is where he does his serious explorations of character and behaviour: film is where he goes to have fun. And Heist is a crackingly entertaining movie, probably as much fun to make as it is to watch.

After the comic digression of last year's State And Main, this is Mamet back on familiar turf: Guys, doing The Thing, because they Fuckin' Have To. As ever, the lines are terrifically hard-boiled and funny as hell (Hackman and DeVito's final exchange is a particular moment to treasure), and the cast give it their all. (And as ever, Mamet's wife Rebecca Pidgeon gives the weakest performance of the bunch, though she's certainly got Mamet's rhythms down cold: Datta wondered in the pub afterwards if all their domestic conversations about buying milk and such are done in that style.)

What's less expected this time round is that Mamet has become a sufficiently confident director to not rely on his dialogue to carry everything. This being a heist movie, there are a couple of robbery setpieces, and Mamet actually pulls these off with considerable skill: he finally trusts his visuals enough to do these scenes justice. The use of the thirties black-and-white Warner Brothers logo at the start gives a clue to Mamet's inspiration for the movie, but this is more like those funky crime flicks of the seventies, a reference that Theodore Shapiro's fine score picks up and runs with. And there's nothing wrong with that at all, particularly when it's as well done as this.

The Cineaste - This is a “story” about three couples in Buenos Aires.  Three young couples, engaging in rather puerile and absurd conversations.  Chance incidents cause their lives to cross:  a car crash (well, actually two), a chance meeting at a tobacconist’s, the ubiquitous request of a stranger for a light.  In their conversations they talk incessantly, but say nothing (“I’ve had two car crashes today” “That’s rare” “But it happens” “But it’s rare” “But it happens” etc etc).  One scene involved one of the couples brewing some tea, and reading the newspaper, largely in silence.  And it lasted about five minutes.  Where was all this heading?  Nowhere.  It was a laborious 72 minutes.


I said “story” at the beginning because usually a story has a plot: a beginning, a middle, and an end.  Even the mention of Diego Maradona couldn’t lift this film out of its lethargy.  An anodyne, rather pointless little number.  Not one to increase the stock of Spanish-speaking films at this year’s LFF.  Star rating: one-and-a-half.