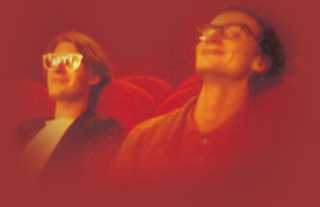 No, I didn't see a single film today. I can tell you're shocked. Just stayed at home and took on the long-delayed task of fitting a new 56k modem in the PC. It's been long-delayed because bitter experience has shown that your PC will invariably end up cream crackered after such a job: and so it proved, hence the slight holdup in getting my closing thoughts on LFF 2000 to you.

Anyway, the final verdict is: not a great Festival, but definitely a pretty good one. To be more specific, the American end of things was a bit of a letdown when compared with last year. It's been suggested in some quarters that 1999 was some sort of annus mirabilis for American cinema, particularly in its second half: and a lot of the best of those films - American Beauty, The Insider, Being John Malkovich and several more - made it over to the 1999 LFF. This year's equivalents never really materialised: you couldn't draw up much of an Oscar shortlist from the 2000 programme, although Ellen Burstyn's show-stopping turn in Requiem For A Dream must count for something.

Meanwhile, the British films tended to fall into the usual two predictable categories: gangster thrillers and fattened-up TV dramas. Mind you, we did get some interesting stuff from Ireland (When Brendan Met Trudy, Saltwater, Wild About Harry) - all from well-established writers, which may be a clue as to why the English films were less successful. And Born Romantic came along on the final night to surprise us all with some cinematic style and good jokes.

The lack of filmmakers around this year - even ignoring the whole PSH debacle - was a bit disappointing. The last-minute cancellations by Kathryn Bigelow and James Caan were obviously beyond the control of the organisers, but generally it didn't seem like there was as much interaction between filmmakers and audience as in previous years. Too often you ended up with the sort of situation we had at Quills and Born Romantic, where virtually the entire cast is brought on stage to do nothing more than just wave and walk off again. In general the foreign directors and actors tended to be more open than their English-speaking counterparts and did some of the best Q&A sessions, simultaneously shaming us all by emphasising how crap at foreign languages the British are compared with (apparently) everyone else on the planet. 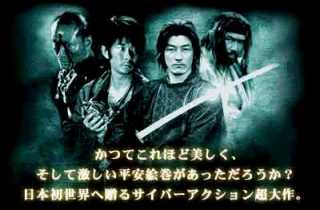 In fact, non-English speaking cinema had a pretty good year of it. Despite the ropey organisation of the Go East seminar, its point - that there's a definite upturn in Asian cinema in general and Korean cinema in particular - came across strongly throughout the Festival. (And to emphasise this, the only one of the Festival films that anyone seems to be seriously considering for Oscar nominations is Crouching Tiger, Hidden Dragon.) European films were a little more hit and miss, but Lukas Moodysson's Together was an early entry on my top 5 list and is still high up there. So although people have been complaining in the past that the original purpose of the LFF has been lost in publicity-grabbing Hollywood glitz, I think this year the glitz had the desired effect: to draw people into a festival, and then show them that the rest of the world has even more to offer.

So for what it's worth, here are the five best films from LFF 2000, no matter what anyone else may say below:

And, because people seem to want to know about that sort of thing, here are the five worst: 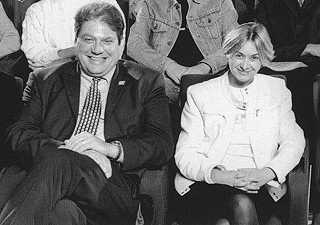 As usual, I'll sign off with the traditional grovelling acknowledgements to all involved. First of all, major thanks to those people over on the left, LFF Director Adrian Wootton and Deputy Director Sandra Hebron, and the whole LFF team for keeping things running smoothly throughout the whole 16 days and giving us all lots of great stuff to watch.

Ta to everyone involved with the running of all the LFF venues I've visited this year: the Odeons West End and Leicester Square, the National Film Theatre, the ICA, the Empire and the massed Nathan Barley clones at the Lux. And the usual special mention to the staff of the Haagen-Daas stall at the Odeon West End, who kept me buzzing with coffee for most of the fest, and never failed to answer my requests for "large coffee with milk" with the question "black or white?"

Huge thanks to those of Spank's Pals who've contributed to the reviews this year: Old Lag, Ken, Nick, Anna and Rob D.

Less huge thanks, but still pretty big ones anyway, to the rest of Spank's Pals who came along to films with me: Jon, Lesley, Pat, Rosa, Rachael, Grizelda, Sylvia, Diane and Smudge the Cat. And commiserations to Fiona, who only booked for one thing this year, the Kathryn Bigelow masterclass that got cancelled.

Thanks to all the staff working at the Hand And Racket pub in Whitcomb Street, who probably have no idea why we only visit the place for 16 nights in November and are never seen again for the rest of the year.

And the biggest thanks have to go to all the filmmakers involved in this Festival. Without their talent and passion for the communication of ideas via cinema, this event simply wouldn't exist. Through their visions we gain a sense of life as it is lived the world over, and we become closer as a global community as a result. These are extraordinary people: it's a privilege to share the planet with them, and I love them all. Except for Joel Schumacher, who's an evil dog rapist. It's true: I've got pictures. Being a monkey, and all.

I saw eight films in all (a pitiful amount compared to Spank's tally, I'm sure, but quite enough for me thanks) and my favourite, indeed the only one I enjoyed, was Sade.  Amazingly for a film about the Marquis with odd tastes it had (almost) no sex in it, but the sense of menace as all the characters wondered if they were the next to be dragged off to the guillotine was present throughout.  Daniel Auteuil was great as Sade, making him appear as a louche but lovable rogue who was concerned not to let his reputation or his writings shock anyone.  The ending wasn't very believable since it showed 'the terror' coming to an abrupt end as soon as Robespierre was executed.  In the unlikely event of Sade going on general release I'd go to see it again.

Worst film was Waiting for the Messiah; one hour and forty five minutes of saying nothing and going nowhere and in Spanish with iffy subtitles, most unpleasant and most of the audience were glad to escape.

An interesting observation - at the end of Attack the Gas Station, half the audience sat all the way through the closing credits; they were in Korean without a translation!

My favourite film from the Festival is still Born Romantic. I got out of the LFF what I wanted: I really was looking for some sort of entertaining, moving, whatever films, and that's what I got!

Well what sort of festival was it? Quite a good one. Was it a vintage year? Probably not. Was it the films selected or those selected and missed? Spank and some of the others felt also that it was not a prime year. Just looking at the festival catalogue for interesting subjects there seemed fewer this year and a lot of crime movies. As an event there were fewer laughs this year though it was good that we had an evening out with people who contribute to the Guardian Film Unlimited Bulletin Board, some of whom spotted us last year in criminal activities. [Us? Whaddaya mean, US?? - Spank] Saw more films than reviewed because of energy and it would lead to duplicates. This time around did not even hit a really bad movie so it was a case of enjoy rather than rave: so no top five, though Born Romantic deserved its star billing. It is just as well we are off to see Moby tonight to get over the post festival withdrawal symptoms.