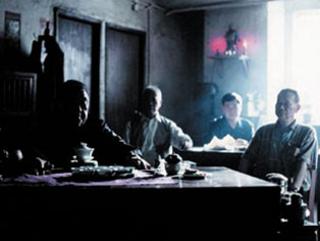 (puts on Hong Kong fanboy hat, the one with 'Chow Yun-Fat Is A Feminist Issue' written on the front) Johnnie To? Yeah, he's all right. He's the sort of hack director that the Hong Kong film industry used to be built around, and one of the ones who stayed put during the great brain drain of 1997. To this day he's still turning out a couple of films every year, generally to a reliable standard. Sometimes he'll hit a vein of pure pulp poetry, as he did with Fulltime Killer a few years ago. Other times, he'll drop the ball spectacularly, like when he followed up Running Out Of Time - a smartly written comedy thriller about a terminally ill criminal's final cat and mouse games with a cop - with a brain-dead sequel that removed literally everything that made the first film bearable, apart from the title.

The election covered in To's 2005 offering is for the role of chairman of a Triad family. At the beginning we see the two candidates canvassing the local criminal community for votes, using large cash bribes where appropriate. Lok (Simon Yam) is the calm, methodical pragmatist: Big D (Tony Leung Ka-Fai) is the loose cannon, who's not adverse to nailing people he dislikes inside crates and pushing them repeatedly down hills. At the end of the campaign a vote is taken and a result is declared: but as you can imagine, this isn't the sort of election where the loser takes the result lying down. And given that the transfer of power relies on a literal baton being passed to the new chairman, before long the main highway between Hong Kong and China has become the location for an ultraviolent relay race.

Election is a curious mixture of ideas, and despite some cracking sequences I'm not entirely sure it all ties together. The main problem for me is the long chase at its centre, as a succession of thinly characterised gangsters tear after each other for possession of the baton. But the main characters at its centre are both fine - Yam and Leung are both veterans of this sort of thing, and provide a solid fulcrum around which the drama pivots. There's also good backup from a number of To's regular supporting players, including the terrifically named Suet Lam.

For someone like me who was raised on the manic bulletfests of John Woo, it's the restraint of Election that's most interesting. In the wake of Infernal Affairs, it would appear that Hong Kong filmmakers these days are prepared to make crime films where character takes precedence over action. Like some of the later Yakuza thrillers of Takashi Miike, it spends some time looking at the moral codes of the Triads (explicitly stated here in a lengthy induction sequence), and how those old-fashioned values are being worn away by gangsters' desire to turn a profit at all costs - there's more boardroom action depicted here than streetfights. Most curious of all, To has decided to make a Triad movie where not a single shot is fired - it feels more and more contrived a decision as the film goes on, but ensures that when the violence comes, it's slow, personal and deeply unpleasant.

It's watchable (as all To films are) and definitely has its moments, but Election isn't one of his greats. I should point out, though, that The Belated Birthday Girl likes this a lot, and has accused me of writing this off purely on the basis of one scene where a gangster bemoans the money he's lost on a big sports bet. "Fucking Manchester United... their goalkeeper was terrible." Mind you, if Timmy Tourette's was playing that day, he may have had a point. 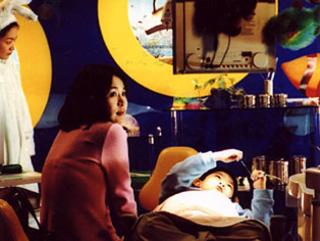 If You Were Me was reviewed here back in 2003. The idea was an interesting one: half a dozen South Korean film directors were approached by the Korean National Human Rights Commission, and asked to produce short films on a vague human rights theme for a portmanteau movie. The results were mixed, but covered a wide range of genres, and included a couple of genuinely great pieces (including one from Park Chan-Wook, just before Oldboy turned him into an international star).

If You Were Me 2 repeats the formula, and like all sequels diminishing returns are at play. There are no directors here who've got a major reputation in the West, or at least that I know of (he says arrogantly - unfortunately, as the BFI still haven't got the Festival catalogue published yet, I haven't got full details of who directed what). The themes are less subtly woven into the five stories - the first one can be easily boiled down to Small Special Needs Girl Has Tiny Adventures, Awwww. And because this film has five shorts stretched across its two hour running time, rather than the six of the previous edition, there are some draggy bits.

One interesting development in this sequel is the amount of time dedicated to intra-Korean racism, a topic that wasn't mentioned at all in the first film. One of the shorts tells a touching but elliptical story of a relationship between two North Korea teenagers, in an environment where their South Korean schoolmates view them as aliens at best, cannibals at worst. The last section, meanwhile, takes a documentary approach to the story of an exploited Chinese Korean worker, who eventually died on the street trying to get his wages.

The two best shorts are the ones with the lightest touch, that aren't afraid to play it for laughs. Jang Jin's one takes a stereotypical situation you'd expect in a human rights film - a policeman torturing a student protester - and then spends its running time looking at what a rough time the cop is having of it, being made to work overtime and being continually hassled by his boss. Better still is Ryoo Seung-Wan's Hey Man, in which four young men stagger drunkenly into a bar and watch their friendships explode as prejudices float to the surface. Shot in just two breathtaking, epic-length steadicam takes, it's simulaneously a thrilling technical achievement, a cutting analysis of the mentality of the Korean male, and funny as hell. In the same way that Park Chan-Wook's Never Ending Peace And Love section from the first collection was one of my favourite films in the 2003 Festival, Hey Man may end up taking a similar position in 2005.

The City Of The Sun

Stuart Pearce Fanclub - Okay, one more thing I forgot to mention from the film that kept on giving, not only did one get Kirsten Dunst and a copy of The Times at Elizabethtown, but one was also given a Haagen-Daas ice cream on the way in.

I like to think I am someone who can spot a trend (or in this case smell one). Well of my three visits to the NFT so far at LFF05, on each occasion there appeared to be a strange odour of mothballs in the air. Is it the seats, or the audience, or perhaps even me? Whatever the true answer, the Odeon West End does not seem to have caught up with this smellyvision yet.

You know how it is when a question really throws you. Thus there I was at the NFT kiosk buying my hot chocolate, when the young man behind the counter asked me: "am I having it here or taking it away?" Well I was all: 'duh what? take away where?' What is the problem with me, the NFT and hot chocolate? Still I decided not to go down this road two years in a row, so I just nodded my head and said 'uh huh', and that seemed to do the trick. So onto the movie, oh must I, really?

Okay: shop floor Slovakian types get made redundant, buy a van, it gets nicked, they also mess around their womenfolk. Even that is bigging this one up. Roddy Doyle's The Van this must certainly wasn't (which I was actually expecting it to be a Eastern European version of). In fact this plays closer to any given episode of Last Of The Summer Wine. It therefore follows that however highly you rate that, will translate into how highly you rate this (ah ha I think I have just made the mothballs link).

Stuart Pearce Fanclub - This late Fifties period piece is set in a permanently grim winter seaport, somewhere near the Russian/Norwegian border. Our hero being a man named Horse (no not the Richard Harris film, ha ha ha), who is a chef in a fancy Soviet (it's all a matter of scale) restaurant. Providing a fair measure of diversion from his cutlets, are two plump but pretty sisters who double up as both waitresses and kitchen cookie grabbers; one of whom Horsey used to date and the other one being his current squeeze. Into this cozy set up comes the mysterious Gherman, a man who has a champion's boxing ability (which Horsey is eager to test) and a penchant for icy dips in the North Sea. Now a certain amount of mix and match friendships and relationships takes place, before Gherman finally goes swimming after a Norwegian trawler looking to defect, and Horsey gets a train to Moscow bumping into the great man Gargarin on route.

Now there is always a danger of course of putting your own preconceived interpretation into a film, to the extent that you end up at cross purposes to it. Thus I had made my mind up from the off that the mysterious Gherman was none other than the actual Gherman Titov, the second Russian cosmonaut to go into space. However this seemed to be implicitly dispelled by the director in the post film Q&A, who described Gherman as simply someone who was aspiring to a better life in the West. In which case I would have liked to have asked where was all the 'top secret mission, ten of us dispersed across the Soviet Union' spiel meant to be going. Also, why were we being teased with Horsey at the end of the film meeting Gargarin on the train? Well do you know what I think, it is probably a case of the writer of this story thinking along my lines, with the director losing something in the translation and putting a slightly different spin on it. Still, as this is the same director who came up with the brilliant The Stroll from the 2003 LFF, he is alright in my book.

Also the final archive footage in colour and on the big screen, of Yuri Gargarin (post Vostok 1) meeting Kruschev and having an open top ticker tape parade through Moscow, was worth the admission money on its own.

"We have about 15 minutes for questions" said the NFT compere at the end. This being taken up by a mere three questions, all of which were from the Russians (are coming) in the audience, none of whom seemed to twig that a question and a five minute lecture/statement (pre interpretation) are not the same thing.